Bob Curley, the president of the Society Hill Civic Association, shows that you don’t need to have long standing roots in a community in order to protect its interests. He’s been a resident of Society Hill for only a decade and in that time has spent six years serving on the board. He became the president in 2014.

Curley is a  proponent of Philadelphia neighborhood associations because of their advocacy for community affairs, unity and preservation.

Are you originally from the Society Hill area?

No. I was born in Germantown and grew up there. Then I went away to college in Washington D.C. When I moved back to Philly, I lived in Germantown and then Chestnut Hill before finally settling in Society Hill. I have been living here for the past 10 years.

Has the area changed in the 10 years you have been living here?

No. It hasn’t changed since I’ve been here. It’s still mostly older people living here. However, there are a lot more condos here now.

What are the major issues in the neighborhood?

Right now, new construction and people adding on to their homes is an issue. We want to keep the area open and want people to have backyards and green space and not build out on that.

Yes. People want more green space and to preserve the ones they already have. One of our biggest projects is we raise money for Washington Square Park. One of the board members, every two years, does a fundraiser to raised money for the park and over the last four years has raised over $150,000. 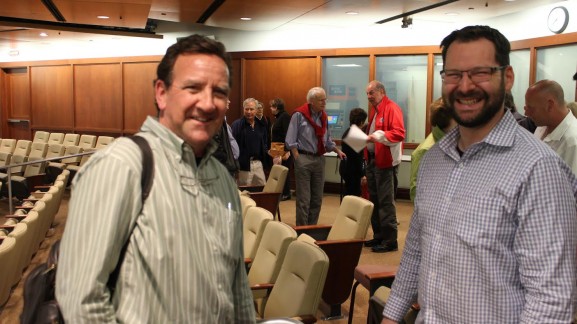 Are there any other issues or concerns residents have?

Parking is always an issue and now we are facing electric cars getting their own parking spaces on the street. We don’t want that in our neighborhood. They should put these charging spots in parking lots. Underfunded pensions is a big thing especially since most of the residents are older people.

What are some neighborhood community service events you’ve helped to plan?

What other organizations are you involved with outside of the SHCA?

I’m involved with the Free Library of Philadelphia Pepper Society. There is the Pepper Society for people who donate money to the library. We have about 1,000 to 2,000 people who do. That money goes to supporting neighborhood libraries and the authors’ lectures.

Have any of the libraries in your area benefited from the money of this council?

There is only one library in the area. It’s in Old City. We were without a library for a while. Then residents got together and petitioned for a library. This one is used by the people living in Chinatown, Old City and Society Hill and it has one of the largest circulations in the city. It opened up 10 or 15 years ago.

Where do you see yourself in the community in the next five years?

The president has a 3-year term. Most of the work of the civic association gets done by the committees, so I will go back to being on one of the committees once my term is up.

– Text and photos by Rochelle Brown and Robert Rutherford.

Lansie Sylvia was merely a fan of storytelling. She never thought she could actually do it. “I knew a lot about storytelling,” Sylvia said. “[I listened] to a lot of narrative-based podcasts and radio shows. […]

On the corner of Mansion and Gay streets, a vacant lot served as parking space for about 30 cars each day. The lot had been looked after and cared for by the community for thirty […]