The plazas surrounding City Hall are enriched with iconic statues. From the 37-foot-tall monument of William Penn at the top of the building to the smaller statues scattered around the base of the structure, these figures are meant to memorialize the lives and accomplishments of Philadelphians of past eras. Locals and tourists hustle through their daily routines out and about in the city, but how many take the time to acknowledge the effigies of these long-gone pioneers? 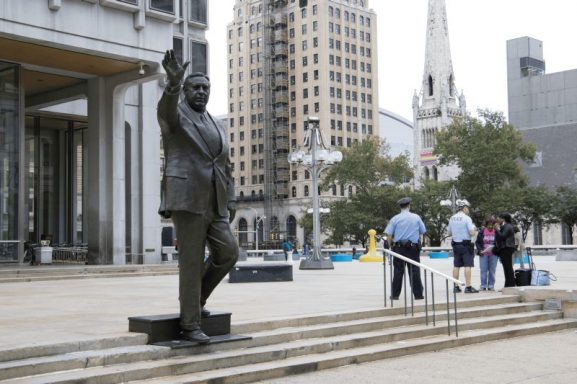 Former Mayor Frank Rizzo stands confidently in front of the Municipal Services Building, just across the street from City Hall’s North Plaza. The late mayor served in office from 1972 through 1980, garnering an infamous reputation as a tough, no-nonsense leader. Sculpted by artist Zeno Frudakis, the statue stands 10 feet tall.

“He’s there waving at everybody,” said Amory Hillengas of North Philadelphia. “[He’s] the only one I know anything about.”

This summer, the statue drew sharp criticism, with protesters calling for its removal, citing Rizzo’s racial insensitivity while he held office. 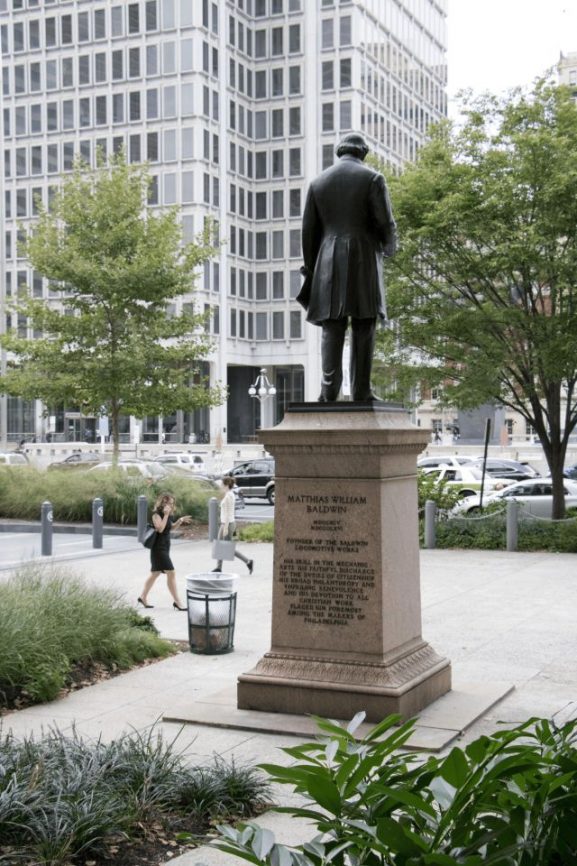 This statue of Matthias Baldwin has looked over North Broad Street since its creation in 1902. Baldwin was the founder of Baldwin Locomotive Works, a company that played a large role in helping the American railroad system to expand. He was a staunch supporter of African-American rights and believed free African-American men should be allowed to vote. Baldwin also donated money to help support a school for African-American children. He died in 1866, but his company made locomotives until 1956. In Baldwin’s left hand rests a blueprint for one of his locomotives. 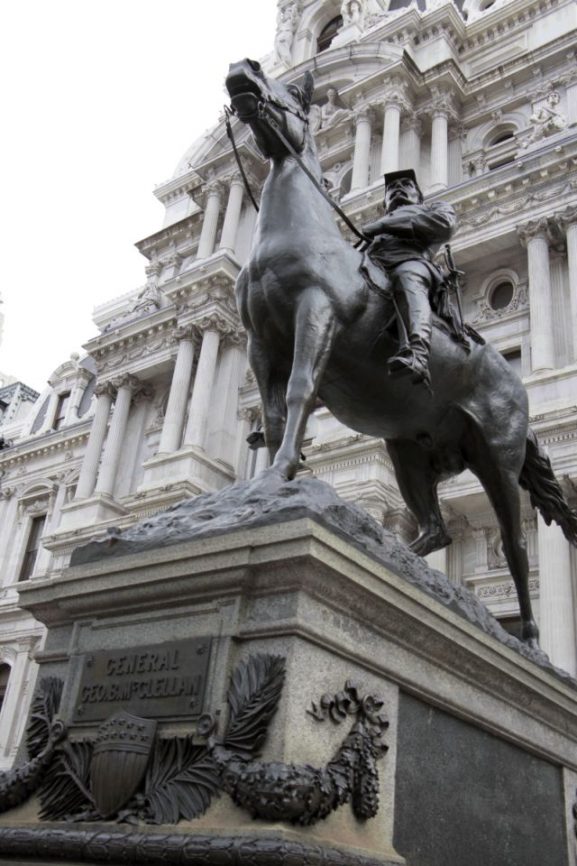 This equestrian bronze sculpture of Gen. George McClellan by artist Henry Jackson Ellicot was completed in 1894, and currently resides at the North Plaza between Broad Street and JFK Boulevard. He was known as the “Young Napoleon” of his time, serving alongside former President Abraham Lincoln as general-in-chief of the Union armies in the Civil War. After he retired from military service, he served as the 24th governor of New Jersey. 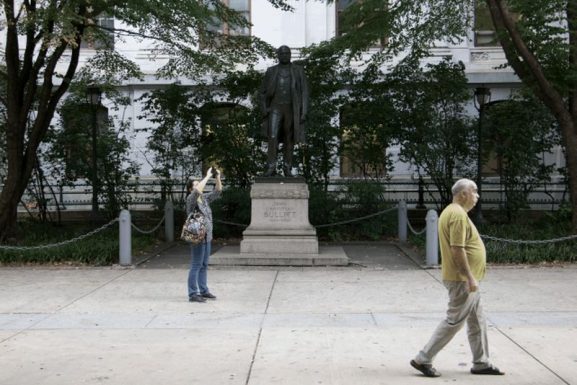 Tucked amidst trees on the left end of the North Plaza stands a statue of John Christian Bullitt, a venerated Philadelphia lawyer. Bullitt served as a delegate to the Pennsylvania Constitutional Convention of 1873. He made a major contribution to the city in 1885 when a document he wrote, called the “Bullitt Bill,” became the Philadelphia City Charter two years later. Sculptor John Boyle created the statue in 1907, five years after Bullitt’s death. 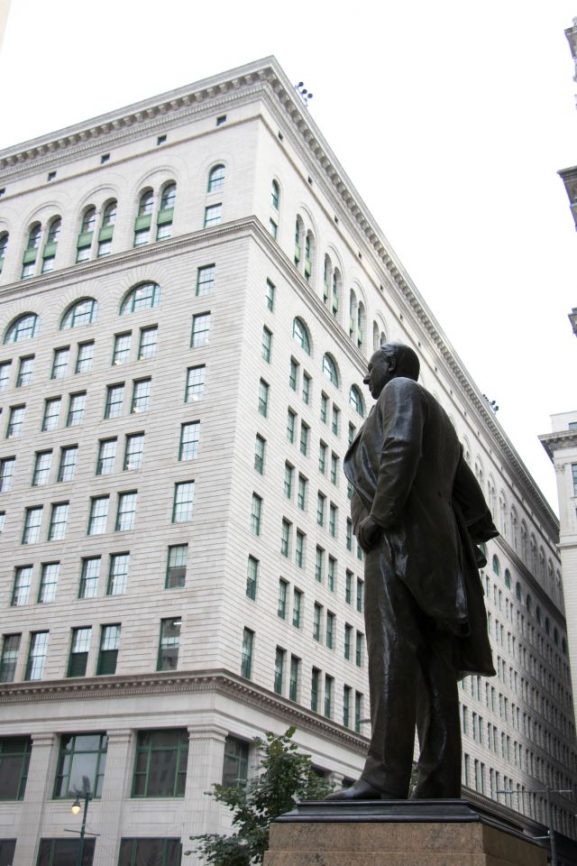 The base of John Wanamaker’s statue, located on the East Plaza, simply reads, “John Wanamaker: Citizen.” Born in 1838 in Philadelphia, Wanamaker converted an abandoned Pennsylvania Railroad depot into a multipurpose store called Wanamaker’s. The business mogul is credited with printing the first copyrighted store advertisement, and was a major proponent of the modern fixed-price system that all retail stores use today. Wanamaker died in 1922, and his statue was erected at City Hall just a year later. 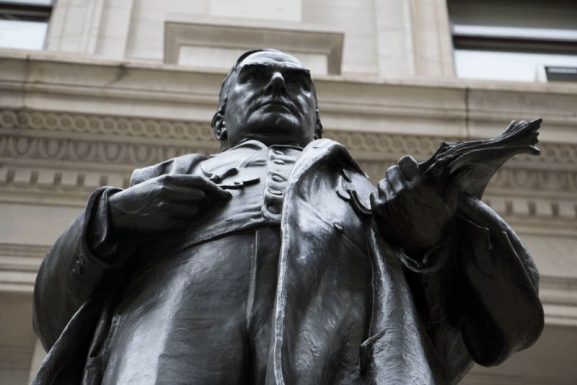 This statue of President William McKinley stands at City Hall’s South Plaza. McKinley took office as president in 1897 and was re-elected in 1900, but only served a few months before he was assassinated in September 1901. As a memorial to McKinley, the citizens of Philadelphia donated over $32,000 to be used for the creation of a statue. Thirty-eight different designs for the monument were submitted to a jury, who selected a design submitted by Charles Albert Lopez, a sculptor, and Albert H. Ross, an architect. They eventually completed the statue in 1908. 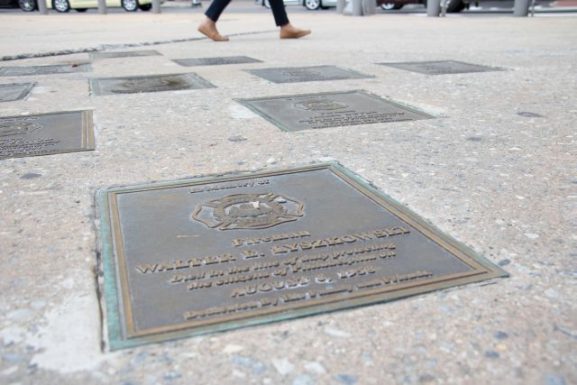 Set into the pavement between City Hall’s North and East Plazas lie these 11 plaques, dedicated to the firemen who lost their lives from an explosion at the Berg Laboratories building in October 1954. The plaques, created in 2007, are the 40th through 51st plaques in an ongoing series of memorials honoring members of the Philadelphia Fire Department who have died in the line of duty since 1871. 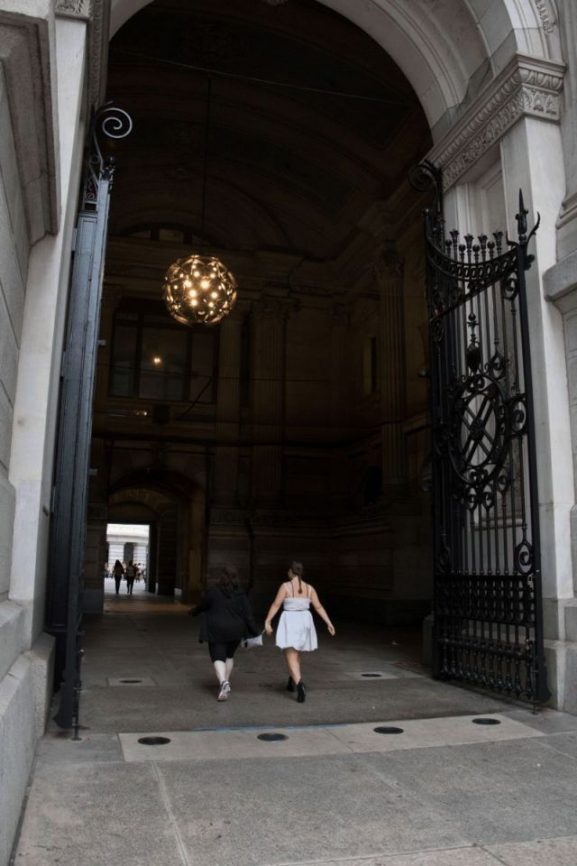 The earliest design for City Hall’s stainless steel and cast-aluminum gates was created in 1869 by John McArthur Jr., the architect of City Hall. Those gates are long gone, but a Philadelphia architecture firm used the original blueprints to re-create them in their ornate glory. The $1.5 million project was commissioned in 2001, and was finally completed last year after the city found funding for it.

Big changes are coming to Penn’s Landing on the Delaware waterfront. The Delaware River Waterfront Corporation is wrapping up plans that will transform the Spruce Street span of the river into a summertime carnival. Starting […]

[vimeo 69132791] Poverty, unemployment and homelessness are prevalent issues in Philadelphia and often wholly connected. In Mantua, the 23 percent unemployment rate among adults is the most direct contributor to poverty for households and individuals who […]

Two University of Pennsylvania medical students are committed to promoting the traditional Cuban dance scene, which is hard to find compared to the salsa dancing and twerking usually seen on the dance floors of Philadelphia.  Michael […]