For the most part, the Philadelphia sports scene is dominated by the four major sports – football, baseball, basketball and hockey, both recreationally and among spectators. While blind people can root for the Eagles, Phillies, Sixers and Flyers, and listen to them on the radio, they can’t play the same sports as the pros.

Philadelphia’s Blind Sports Organization creates a sense of community to attract blind people to the many recreational opportunities they have to offer.

“I’ve always been involved in sports myself,” said Tina Camuso, BSO parent board member and advisor to the Philadelphia BSO board. “I believe there are many benefits from children participating in sports. I wanted to make sure my son, who is blind, had that opportunity.”

Judo is one of the sports that BSO offers that give members the benefit of a competitive outlet – or just a great recreational opportunity. The judo participants meet every Saturday at Overbrook School for the Blind to practice. Some are learning or just doing judo for fun, but others have loftier goals.

“One of the guys became a two-time Paralympian,” said Steven Mulhern, who leads the judo program for Philadelphia BSO. “Right now, I’m working on my first Paralympian. I’m hopefully going to Korea this May to qualify for the Paralympics next year.”

While judo offers BSO members the opportunity to compete at a high level, there are plenty of other added benefits that can be gained from judo. 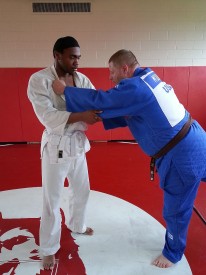 In order to show Philadelphia’s blind and visually impaired all that BSO has to offer, they hold an annual “Sports Day.” There, they can try out all different kinds of blind sports, such as Goalball, wrestling, basketball and more. All sports balls in blind sports have either bells or a beeper inside them. They also hold a Sports Weekend, filled with plenty of blind sports opportunities and other activities such as tug-of-war, morning runs and Ping-Pong.

Despite having sports in its name, BSO is about much more. Throughout the year, they plan events to nurture the community of BSO members. Early this year, there was a BSO snow-tubing trip for all families. In the past, there has been a summer trip to New Hampshire for swimming sailing and kayaking.

“I think BSO is so important to me because it’s been such a huge part of my life for the last few years,” said Matt Shields, who has been involved with BSO since grade school and currently serves as a member of the Philadelphia BSO board. “Because of BSO, I’ve been snow-tubing, water skiing and I’ve been able to travel around the US and to Canada to play Goalball. I’ve been able to meet a ton of great people who have become a big part of my life.”

Meeting new people and making new friends is just as important in BSO, regardless of the level of interest in sports.

“It’s not just athletics,” said Camuso. “There is also the socialization aspect. We have athletes who would just like some exercise every so often and we have other athletes who have gone on to participate in the Paralympics and even bring home medals. Plus, all levels in between. We’re not worried about your skill level or prior experience. We can teach you what you need to know.”

“It takes a lot of hard work and a lot of money to keep this organization going,” Camuso added. “We have a financial challenge with the expense associated with travel. Sighted athletes have many opportunities to play in a league, on the local ball field or in the local YMCA. Because there are so few blind and visually impaired athletes, our teams need to travel to other states every time we want to play a competitive game against another team.”

Camuso added that the cost to use different facilities has risen in recent years and has added to the financial challenges.

There are also other difficulties that are not as easy to resolve.

“Blindness is a low incidence disability,” said Camuso. “So the pool of folks available to participate is much smaller.”

That pool could continue to shrink with medical advancements. Of course, this is generally good news but it hinders BSO chapters’ ability to grow. Without that growth, it makes it more difficult for Philadelphia BSO to offer the same opportunities it has in the past.

Originally the Philadelphia Association of Blind Athletes, the Blind Sports Organization was created by Mae Davidow to offer blind public school students the athletic opportunities they could not have otherwise in school.

While some struggles may lie ahead, the passion and dedication of the volunteers and members in Philadelphia’s BSO chapter has given many members optimism for the future.

“I think the organization has shrunk in recent years as our participants have grown older,” said Shields. “But we have a great group of dedicated volunteers and a good mission. We’re ready to work hard to make sure we have great events and competitive sports teams for anyone in the area who may be interested.”

– Text and images by Moshe Kravitz and Matt Wallace.