Rachel Winsberg is helping lead the way for the Jewish community in Philadelphia. Jewish Voice For Peace (JVP) is a national, grassroots organization focusing on Jewish traditions and working for a just and lasting peace. The organization works in accordance to the principles of equality, human rights and international law for the people of Palestine and Israel, with Philly’s chapter focusing on local level movements. Winsberg is the current chairwoman of JVP’s outreach committee where she schedules and facilitates meetings, keeps track of logistics and long term goals, and helps build a committee member leadership. 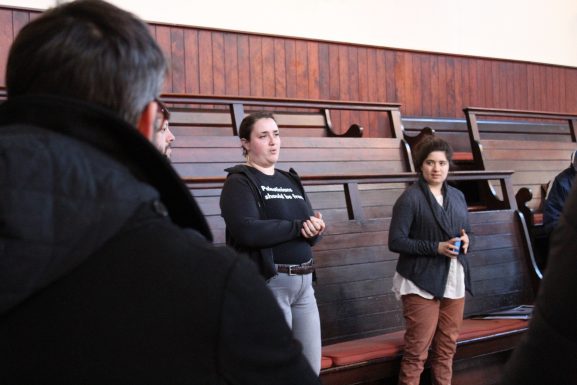 How/when/why did you get started with JVP?

I started organizing with JVP in July of 2014 during the War on Gaza in which thousands of Palestinians were killed and hundreds of thousands displaced. At that time, JVP nationally gained tens of thousands of supporters. Like the many other people who joined at that time, I decided it was time to take a firm stand in opposition to Israel’s human rights abuses. I chose to do so with JVP because JVP’s tactics respond directly to calls made by Palestinian Civil Society. My first organizing role was legwork for an action calling on the Philadelphia Jewish Federation to take a stand against Israel’s inhumane bombardment and blockade of Gaza. I obtained materials, made signs and took notes at meetings. In the two and half years since then, I have slowly taken on more and more until eventually I was in charge of our outreach efforts.

What kind of community is JVP?

JVP Philly is a supporting, energizing and organizing home. We are intergenerational with members in their 20s to 70s. While JVP is inspired by Jewish tradition, we are an interfaith community. I find it extremely helpful to organize in the context of my faith because I learned many of my ethical standards from my parents and Jewish community as a child. I crave a tight-knit community, and that’s exactly what I get through organizing with JVP. 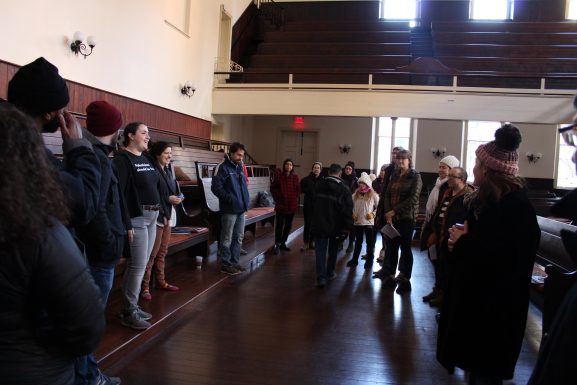 What have you been working on in this position and what are your goals?

Right now my top concern is how to successfully capture and direct the new energy around taking action to resist Donald Trump, and all of the associated systemic problems that he represents: Islamophobia, racism, misogyny, classism and transphobia, to name just a few. Between now and Rosh HaShana (Sept. 20), my goal is to fill about five-to-eight specific leadership roles we are lacking, increase our chapter membership from 75 to 200 and increase our Listserv subscribers from 600 to 1,000. This will expand our capacity for both rapid response and long term power building. It is also vital that we build power alongside the other organizations doing this work in Philadelphia, particularly organizations led by people of color and other people most impacted by Trump’s oppressive regime. We work with the Council on American-Islamic Relations and New Sanctuary Movement, to name just a few, and take cues from them on what is most strategic during this period of perpetual crisis.

Today 40 people came out to canvass with posters that say “Stop Profiling Muslims.” We asked business owners in Center City to put these posters in their window as a response to President Trump’s ban on refugees and the entry of people from seven majority Muslim countries – Syria, Yemen, Iran, Iraq, Somalia, Sudan and Libya – a policy that puts the lives of many refugees at stake and tears apart families and communities. It is also a response to the increased levels of hate crimes we have seen against Muslim Americans since the election and to the growing Islamophobic sentiment in this country. 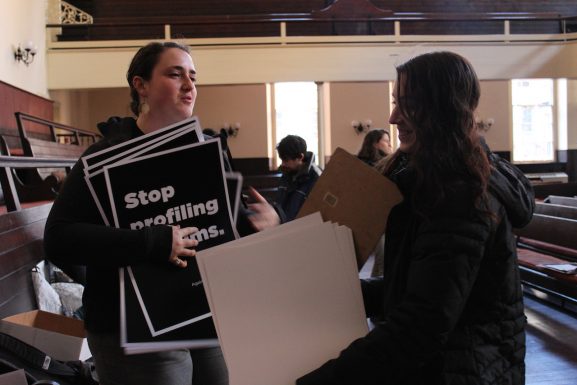 What are you focusing on and helping JVP to focus on?

Many organizers I know have to keep repeating: “this is a marathon, not a sprint.” With so much awful news coming out every day, I often feel as though I can’t possibly do enough, that I need to push myself harder and harder. And to an extent, that’s true. As a white, socio-economically advantaged, cisgender woman, I am at less risk than a lot of people, and that means I need to work harder.

– Text and images by Kristine Fenstermacher and Shannon Hurley.

Alice Shockley has lived in Point Breeze for the past 79 years and has no plans of leaving. The 85-year-old retired nurse has been an active member of Neighbors in Action for the past 10 years, [continue reading…]