The game of darts, for almost everyone that plays, is a fun way to pass the time at a bar, something to occupy the hand not cradling a beer. For many, it develops into a passion.

In Philadelphia, those select few join the Quaker City English Dart League. The QCEDL is an expansive city-wide dart league that has league match ups from September through May as well as hosting charity tournaments year-round.

“It’s based mainly in the Northeast but it does encompass all of Philadelphia,” Brookes said. “Everywhere you can name we have dart teams in different bars.”

Mark Whited (pictured below, left) is a 14-year board member for the league. Whited also shoots for Joey O’s but on a different team in a different division than Brookes.

“It’s something to do at the bar,” said Whited when recalling how his passion for the game started. 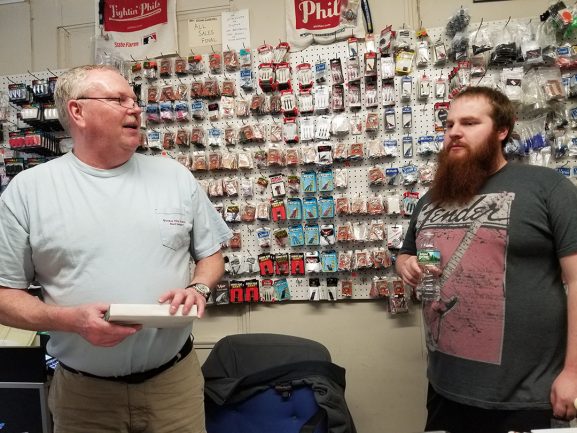 From hobby to passion and ultimately a business, 20 years ago Whited left his job and opened Bull’s Eye Darts. His new venture is a supply and repair shop on Torresdale Avenue in Tacony where he notes that many of the league members are customers.

There are currently 21 divisions in the league with around 1,100 members. There were as many as 2,500 players among the ranks in the league’s halcyon days, according to Brookes.

“Everybody in Quaker City Dart League – it’s like a family you know?” said Whited, turning from his work bench where he was busy replacing dart tips. 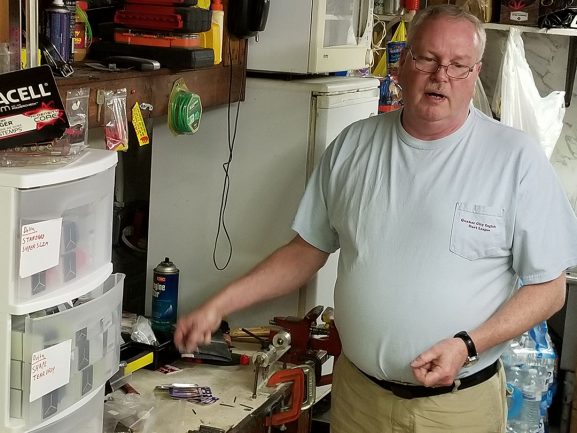 Fittingly, one of the league’s first forays into charity followed the death of a member from leukemia. The league organized a shoot to raise money for leukemia research following Rae Chesney’s death and has been holding it annually since then.

Per both Brookes and Whited, in the last 25 years the league has formed a host of annual benefit tournaments, with money raised going towards cancer research and charities such as Toys for Tots, Aid For Friends, Holy Terrors Stars (a local baseball league for youth with special needs) and more.

Whited regularly donates supplies from his store to the league’s charity events.

“It’s like a big group, everybody knows everybody,” Whited said. “And anybody would do anything to help anybody out.”

When Northeast Catholic High School shuttered in 2010, many of its alums were understandably upset. Ask any of the graying men in their signature red caps and sweaters you might see around Northeast Philly, warming […]

Saturday marked a continuation of a developing initiative, occurring all throughout the United States, of promoting healthier lifestyles. Residents of Northeast Philadelphia were invited to the inaugural Healthy Trails 5K run/walk in the Tookany/Tacony Creek Park to […]

Residing in the heart of her neighborhood, Kate Clarke is the president of the Juniata Park Civic Association. The community-based organization meets the second Tuesday of each month to discuss and mitigate community issues. How […]