Poems about New York and chapters from a romance novel echoed through the Kingsessing Library’s sunlit basement.

On Sept. 28, the library hosted an open mic poetry night for older adults— the first of many, Rachel Hayes hopes.

“I think it’s important for the community,” Kingsessing Library Supervisor Hayes said. “Anything positive, anything that builds literacy skills creates a way for people in the community to socialize in a positive way.”

Clutching, “Messenger Blues,” a thin blue book he published last November, Carrington stood behind a podium and recounted his 14 years as a bike messenger.

“Our father, who art in heaven, please let there be a nice warm table, and some nice hot coffee for these frozen fingertips,” Carrington read. “Lead me not into temptation, but deliver me to Burger King.”

Carrington, 68, lived for decades in New York before relocating to Kingsessing — a neighborhood he thinks is ideal for writers.

“I really like my quiet block at the park behind the library here,” Carrington said. “It’s a very serene place where I can go in the morning and do my reading or writing.”

Carrington added that he considers the library his second home. 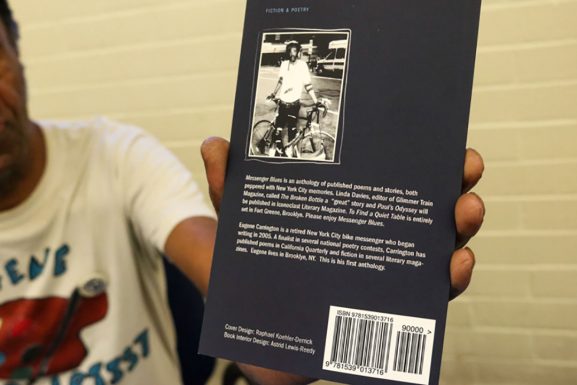 Perched on the intersection of 51st Street and Chester Avenue, the library is a hub for education. The expansive, century-old building offers adult literacy lessons, mentoring workshops and even couponing classes.

But Hayes noticed a lack of programming for senior citizens.

“I was thinking about senior programming, because seniors and teens are underserved at libraries,” Hayes said.

Now, she intends to make poetry nights for seniors a regular event.

“I was really surprised,” said Odessa Bond as the open mic concluded. “We’re having refreshments and everything. There was a nice crowd.”

Bond, who heard about the event through Carrington, read from her 1971 novel, “The Double Tragedy”— a novel she described as “a little love, a little murder.” 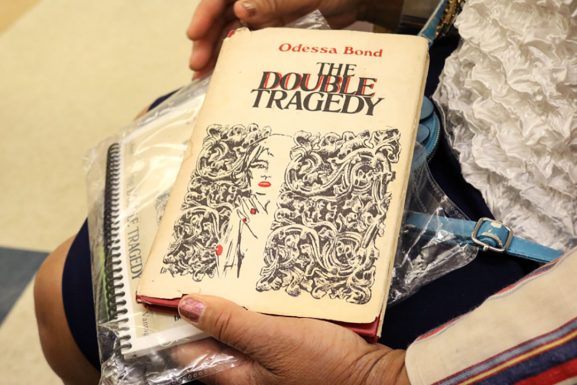 While the event focused on older adults, all are welcome to attend, Hayes said.

Alex Courtney, 30, grabbed the microphone to tell a comical childhood story. Courtney, who recently moved to West Philly, said he enjoyed the creativity of the older performers.

“I like to see how, what people write at different ages,” Courtney said. “I always like to guess how their lives have progressed and changed.”

When the School District of Philadelphia removed the Morton McMichael Elementary from the list of schools that would close at the end of the year, parents of students at the school were thrilled. “I was […]

https://vimeo.com/25560818] Librarian and archivist Alex Bartlett combines his hobbies with his career. Working for both the Germantown and Chestnut Hill historical societies, Bartlett manages the libraries’ collections and archives, while also helping to provide visitors […]

For the first time in Northeast Philadelphia’s history, you can pass by an Andy Warhol painting on your commute home. Yes, you read that right – exciting things do happen there. The Philadelphia Museum of […]