The 7000 block of Erdrick Street in Tacony is anxiously awaiting to find out if it will become the city’s Most Beautiful Block.

And if you speak to any of the residents, they believe they’ve got a good chance of winning the citywide contest run by the Philadelphia More Beautiful Committee. Results will be announced in November.

The block welcomed neighbors and judges from the committee at the end of September with food, games and a performance from the Greater Kensington String Band.

“That day was very, very stressful,” block co-captain Pete Smith (below) said. “I was so focused on the competition itself that I lost sight of the fact of how great of a job we were doing bringing the neighbors together.”

A big part of the contest included a beautification project and resident participation. 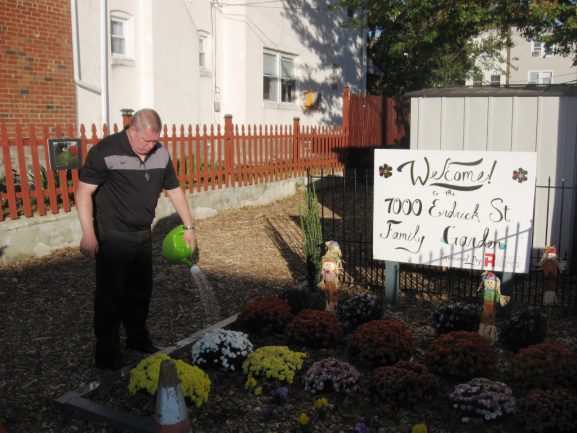 “We unveiled our community garden as our beautification project,” block co-captain Kurt Hibner said. “We had all of the houses on the block decorated for the Halloween season and everybody participated.”

As co-captains, Hibner and Smith were tasked with getting the entire block’s buy-in for the effort.

“Pete and I are a good mix to be co-captains,” Hibner said. “He’s more of a veteran of the block, and even though my mom lived here, I have one of the younger families on the block. Together we find a way to relate to everybody and that really helps in getting them more involved.”

The idea for the block to enter the contest came about during a block clean up day. Hibner, Smith and other volunteers helped clean up a vacant alleyway that has now been transformed into the community garden.

“We decided to take advantage of the help we got in clearing the space, and decided to make it into a community garden in memory of our neighbors who have passed,” Smith said. 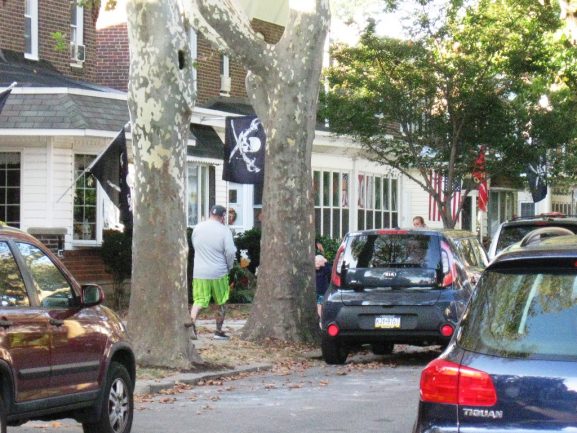 The clean block initiative had started on Erdrick Street, but has now grown throughout neighboring blocks in Tacony.

“We started our block unity with a few pirate flags, and the more our block unity grew, it truly became infectious,” Smith said. “I’ve helped 22 blocks get themselves organized, gotten them block captains, and put them in touch with the proper city officials so that they can all do more to help themselves and their community.”

The work Smith and Hibner have done continues on as the pair have now landed spots on the board of the Tacony Civic Association.

The winners of the Most Beautiful Block contest will be announced at a clean block gala in mid-November. There are cash prizes for the top four blocks, and all participating blocks will receive a participation prize.

–Text and photos by Eric Michaels

The Rev. Bradley S. Hauff is the rector at All Saints’ Torresdale Episcopal Church, which is located on Frankford Avenue. Born in Sioux Falls, South Dakota, Hauff has been at All Saints for two-and-a-half years. He [continue reading…]