Vincent Farhat (pictured above), pastor at St. Maron’s Catholic Church located at 1013 Ellsworth St., has taken the guidance from his upbringing to provide love and compassion to all people. Farhat’s relationship with his family has led him to dedicate his life to his church and to his faith.

The 53-year-old Lebanese American was born and raised in Michigan, the youngest of 10 children. He was taught at a very young age by his parents and older siblings to celebrate his heritage.

“My parents were both born in America, yet they brought us up stressing the importance of our Lebanese culture and our roots,” Farhat said. “We were American in every sense, but in our heads and in our hearts we were also Lebanese.”

In addition to stressing the importance of their roots, Farhat’s parents constantly encouraged him to chase his dreams and ambitions, but on one very serious condition.

“My parents instilled in us the notion that my siblings and myself were capable of doing whatever we wanted to in life and that we could be whoever we wanted to be,” Farhat said. “But that we would all be highly educated in accomplishing our dreams.” 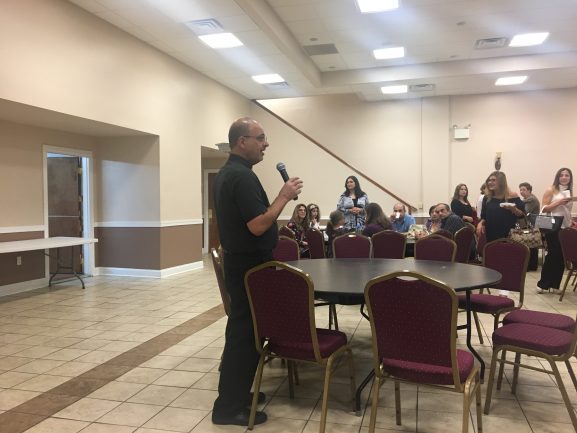 Farhat attended and graduated from The Dominican House of Studies and The Catholic University of America, both in Washington, D.C. Farhat initially questioned his decision to attend seminary school, and to enter into priesthood, but he found comfort in his family’s unconditional love and trust in his faith.

“I initially didn’t think it was going to work when I went into the seminary,” Farhat said. “But luckily, thanks to support from a few cousins who were also priests and my parent’s full aid and support, it ended up that it was what I felt I was called to do and eventually stayed there for all four years. Sometimes we have to be open to what God has planned for us.”

Dr. Ziad Labbad has seen many changes in the church during his 45 years as a member of St. Maron’s. He is confident Farhat is the most dedicated pastor he has been around.

“Vince is beyond dedicated to his work and to his family,” Labbad said. “He always provides us with a great source of happiness and positive energy, and there isn’t a person in the world who couldn’t detect that he is in love with what he does.” 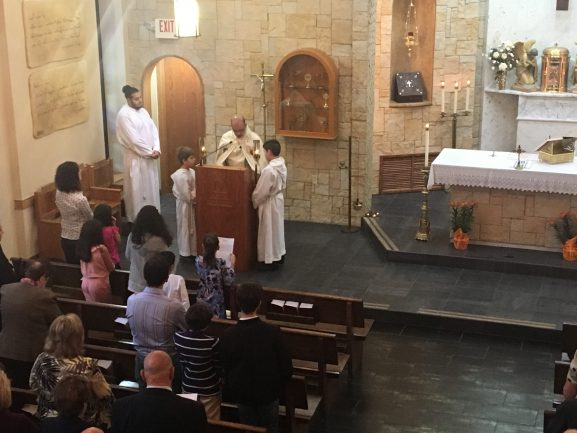 Aside from his persona as the only standing priest at St. Maron’s, which consumes most of his time and efforts, Farhat sees himself as a kind and considerate man who enjoys life’s simplest gifts.

“I am extremely sensitive, so if something bothers people who are close to me, then it bothers me,” Farhat said. “I enjoy every single day and I absolutely love being surrounded by people. Traveling is a huge passion of mine, as I also lived in Florida for 23 years, as being among the ocean is what makes me the happiest in my life. What you see is what you get is a perfect way to describe me.” 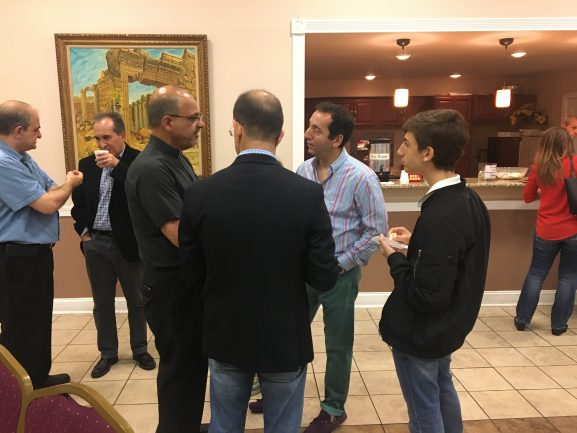 Farhat has taken a few tips from the way his parents raised him in working with the younger generation, both in the community as well as in his parish.

“One of the greatest gifts a parent could give a child is to let them become who they are through the process of hard work and education, and that is what I teach to the children and the upcoming generation,” Farhat said.

In addition to his dedicated work ethic, Farhat has inspired older members of the parish to become more connected in their faith in an attempt to help their relationship with God and bridge the gap between generations.

John Landi was born in Northeast Philadelphia and has been a devout churchgoer throughout Philadelphia since the 1970s. Landi applauds Farhat’s inclusion of the younger generation into the church and in services.

“Vincent’s spirituality uplifts all of us, and his constant loving energy really bodes well with the younger generation,” Landi said. “We all feel as though our parish is one unified family, which all stems from the great community work done by Vincent.”

George Sholy, a longtime member of St. Maron’s, discovered Farhat’s true character when struggling with sickness and severely declining emotions. He believes the positive feelings that fill the parish during weekend services comes from the optimism Farhat shows throughout his life.

“When I was sick in the past, Vince really stepped up and we visited together in my house and in the hospital, which really meant a lot to me,” Sholy said. “Father Vince provides us with more than just a church, and my family will always be grateful to the selflessness Vincent has always showed to us.”

Tony Salloum, a member of St. Maron’s since the age of four, has seen his family and personal life grow spiritually with the help of Farhat.

“My wife and I were the first couple that Vincent married,” Salloum said. “He baptized both of my daughters and he truly makes everyone feel at home and is loving to us all. This is certainly our home parish.” 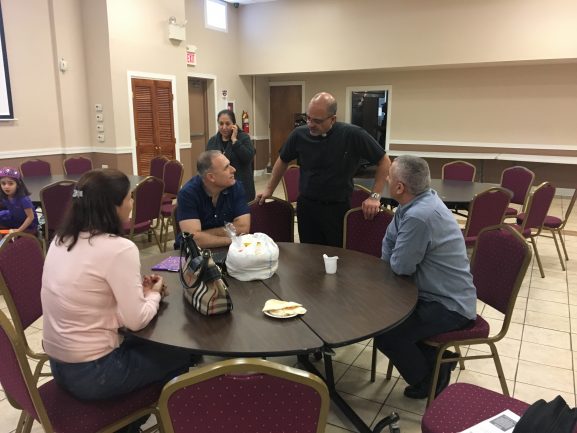 With seven siblings living in Michigan and two brothers living in Texas, the distance between his nine siblings has put a strain on the amount of time spent between the family, but they will never lose the strong family dynamic their parents constantly taught them.

“I do miss my siblings every day, but we do constantly stay in touch and check on each other,” Farhat said. “Nothing can get in the way of our bond and the memories we have made. I thank our parents for instilling in us the importance of family and kinship.”

Farhat certainly misses his family, but sees his Philadelphia family as a way to fill the void.

“Because this is such an ethnic parish, the identities shared between Middle Eastern people has become like my second family,” Farhat said. “Whether I am in their homes for dinner, at their homes for baptisms or unfortunately at funerals, I truly have found my home away from home.”

For immigrants involved in the legal system, finding an adequate court interpreter from an online roster might seem like an easy task, but others may gasp at the low number of translators for their native language. For example, [Read More]

The Ethical Humanist Society of Philadelphia echoes the traditional ideas of humanism, which is the philosophy that highlights the importance of all human beings. In general, most humanists prefer to think analytically and critically, relying [Read More]