Dorian Vasquez and Setoiyo Ekpo are both Philadelphia-based comedians by way of Columbus, Ohio. Each giving back to North Philadelphia residents in their own way, they just happen — by coincidence — to be helping people on different ends of the age spectrum.

Vasquez is as a career specialist, helping find jobs for graduates at the Philadelphia Technician Training Institute on Girard Avenue. Growing up in a similar environment, Vasquez tries his best to relate to the students.

“I grew up in a predominately black and hispanic neighborhood,” Vasquez said. “I mean, I’m from the hood essentially, but I was always the smart kid that got picked on growing up.”

Vasquez is originally from Los Angeles where he did comedy for a year before relocating to Ohio. Now as a Philly entertainer, Vasquez has submerged himself in the scene, putting together shows at Victoria Freehouse and Max Capacity Comedy productions which are run out of his Spring Garden apartment. 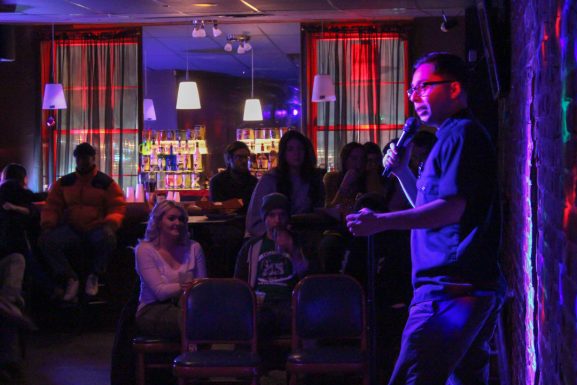 “And he was all in back in Columbus,” Ekpo said. “Like, he was super-duper all in. He just took that same work ethic and brought it over here.”

Ekpo actually played an integral part in Vasquez’s move to Philadelphia, at a time when his friend felt stuck.

“I was just like ‘give it a thought because I think it’s pretty clear you can’t stay there,’” Ekpo said.

Ekpo is now helping other Philadelphia comedians in similar ways.

“He’s like a comedic brother, I think to like a lot of people, because he’s approachable,” said local comedian Jarrod Little. “There’s like no ego with him.” 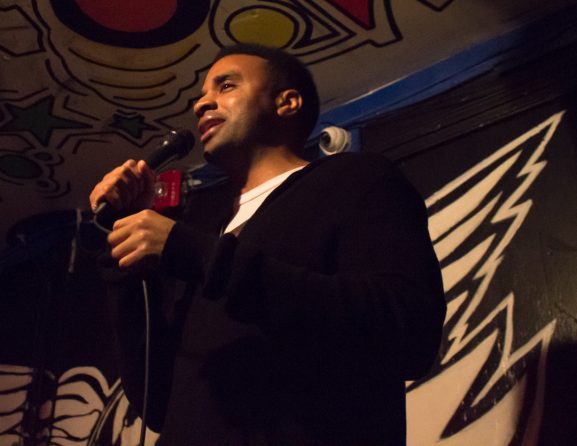 Ekpo works as a payroll manager by day but teaches hip hop dance on the side. He does give private lessons, but his real joy comes from teaching classes to inner-city youth at the Community Education Center in West Philadelphia or Girard College in North Philadelphia.

“I would say I was probably doing it more back home than I am doing it here, simply because the volume of comedy that I was doing was not as much so I actually had more free time,” Ekpo said.

He moved from Ohio after giving comedy a serious push in 2011 and making it all the way to the Funnybone Funniest Person in Columbus Finals.

Ekpo performs at open mics and comedy clubs in and around the city, and hosts a weekly podcast called “Them Boys” with Alex Pearlman.

Ekpo has never heard of a bad artist coming out of Philly and that’s precisely why he’s here.

“Philly really will just give you a good beating until you become good,” Ekpo said. “And even then when you’re good, it’ll keep on beating you because it’s Philadelphia.”

Areas like Kensington, Fishtown and Olde Kensington have become synonymous with a new rising scene that was not there before. With each artist that moves into the area, the culture begins to shift and the […]

Powelton Village: Second Friday is No Worse Than First

Most Philadelphians are escaping work and heading to happy hour around 5 p.m. on every second Friday of the month. But in Powelton Village, artists and non-artists alike are probably hitting the streets for their […]