The day was cold. Even by mid-afternoon, snow littered the ground of Sedgley Woods Disc Golf Course located in East Fairmount Park, near the intersection of 33rd and Oxford streets. That, however, did not stop a group of 30 to 40 disc golf players from assembling to play a round of the sport.

This was a small crowd. During the summer months, regulars of the course said that the place tends to draw more than 500 people per week.

“You get all walks of life, from all ages,” said Josh Hughes, the public relations director for the Friends of Sedgley Woods – the group that maintains the course. “We get people out here from the really young to guys that are in their 60s, 70s still playing. Look around and you have people playing from all races, ages and social class. It’s just a place where people can come and hang out.

Sedgley Woods may not look like much and unless you are looking for it, may be hard to find. At first glance, the course has the look of a suburban backyard – a quaint grassy yard with large trees scattered around surrounded by a large wooded area.

Regulars to the park sit or hover around the assortment of furniture just off the course’s 18th hole, giving the area a homely feel. To them, Sedgley is more than a place to play disc golf. 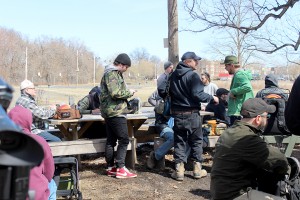 Jay Robinson is one of those regulars. He began playing the sport during his college days at Rutgers University and continues to play he said when he moved to the Philadelphia area. He said he comes to Sedgley Woods and plays the course between two or three times a week.

A combination of Frisbee and golf (or “ball golf” as disc players call it), disc golf uses rules similar to that of its club and ball counterpart, giving payers a certain amount of shots from specified distances to land get the disc into the hole. The “hole” in this case is a metal basket on top of a pole with chains draping down from the top. 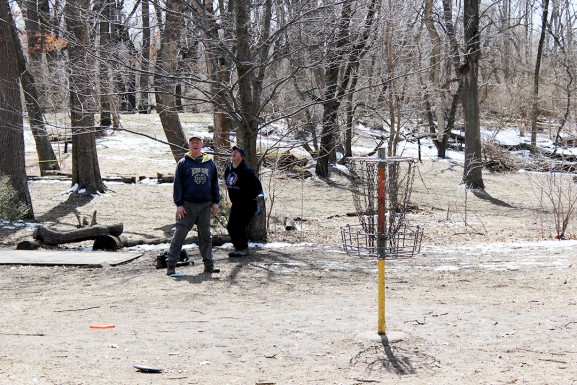 “The sport has grown so much, relatively quick,” said Dave Prue, the treasurer for the Friends of Sedgley Woods.

Prue went on to say that he has been playing at the Sedgley Woods for around 10 years and figures he has played close to 300 courses across the country.

“Ten years ago, 99 percent of the population didn’t even know about it,” he said. “Now, with more courses and people becoming more aware of the sport, it’s played across the country and internationally.”

Established in 1977, Sedgley Woods Disc Golf Course is the oldest course on the East Coast and the only one in the city of Philadelphia, something that players find frustrating and are looking to change. 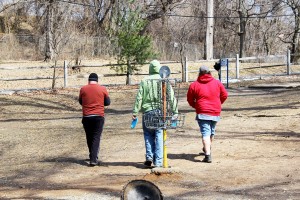 “It’s embarrassing,” Hughes said. “This is the only course in the city. You go to other cities and they have a bunch. We’re not looking for much. It could be a piece of land that the city doesn’t want to take care of. We’re just waiting for the call. We’ll come and take care of it, just like we do at Sedgley Woods. The city doesn’t maintain Sedgley. We do.”

Prue added similar sentiment, believing that Philadelphia was seriously lacking in the number of courses compared to areas outside the city limits.

“It gets crowded, especially on the nice summer days,” he said. “I hate to say this but there are too many people here sometimes.This course is getting overused sometimes. You go out into the suburbs and within an hour, hour and a half, you can find 10 to 15 courses. Philadelphia has one.” 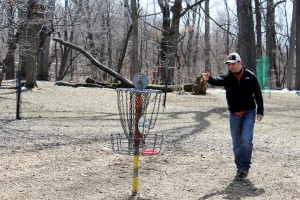 At the end of the day, Robinson said, it’s a sport for anyone, competitive or not.

“This is a sport that anyone can play,” Robinson said. “Believe it or not, it can give you a workout. But you can play it competitively or just for fun. It all depends on how serious you want to take it.”

Mark Squilla represents City Council’s 1st District, a diverse and growing area. The district he is responsible for includes Port Richmond, among other notable stretches of Philadelphia such as, the Delaware River, Chinatown, Center City, Northern [continue reading…]