The Fletcher Street stables are home. At least that’s how Jamil Prattis describes them.

Prattis, 29, has been coming to Fletcher Street since he was 11 when his cousin taught him to ride. His first horse was a 12-year-old thoroughbred named Lady Tracey. He took care of her, riding her until she died in 2013. 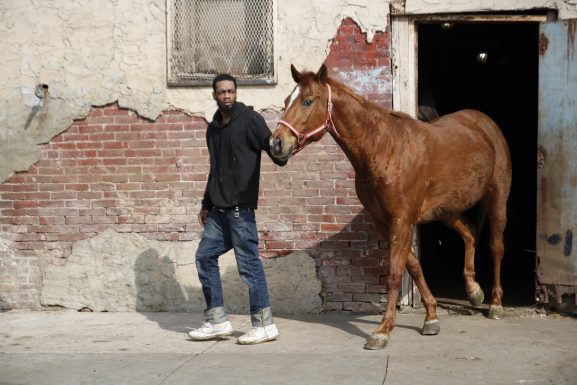 Prattis still owns a horse at Fletcher Street, but he also takes care of other owners’ horses to help pay for his stable. He arrives every morning at 6:30 to clean the stalls, feed and groom the horses, and let them out for runs on the city-owned field in front of the stables. When the weather is nice, he rides to Belmont Plateau in Fairmount Park, which he calls the chill spot, or on city streets.

“[Horseback riding] is something different,” Prattis said. “It’s not, ‘Oh look we gonna go play basketball.’ No, I’m waking up in the morning and gonna go ride a horse.” 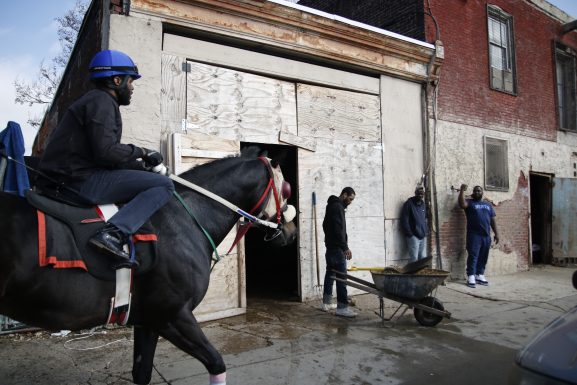 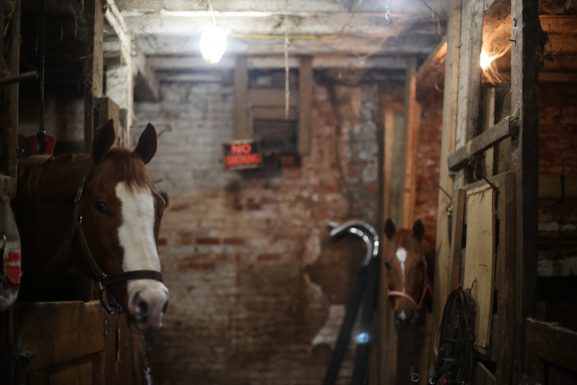 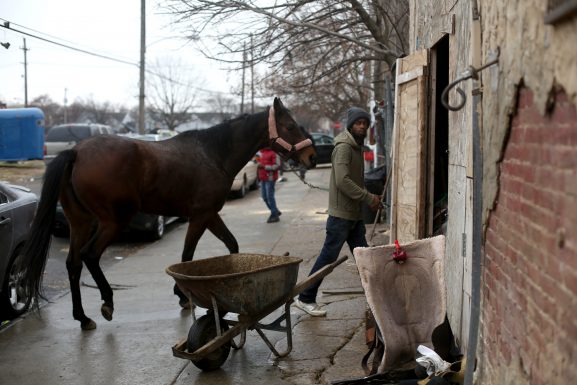 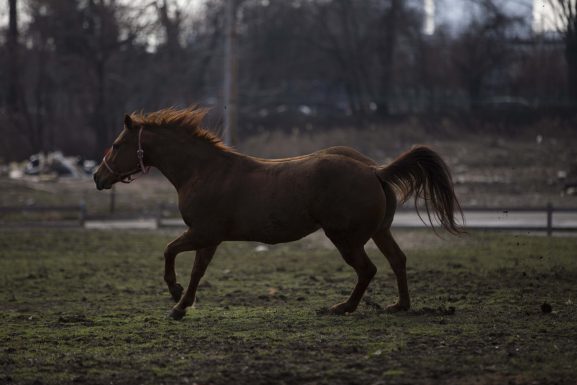 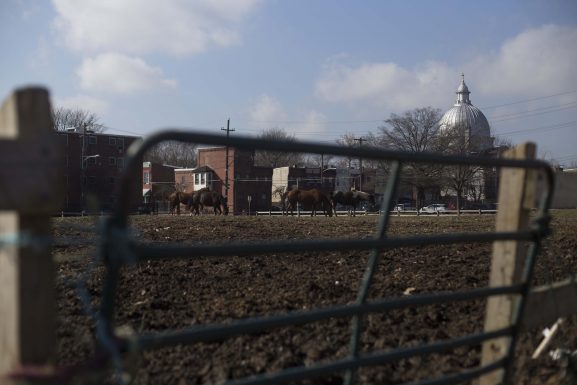 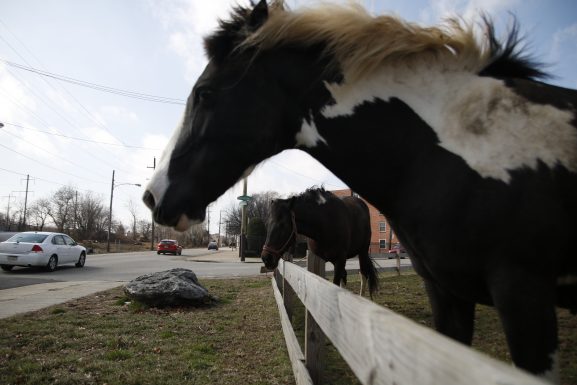 Just like Prattis, a few of the guys who frequent Fletcher Street have been riding since they were young. Stephfon Tolbert, 34, has known Prattis since they were kids. Tolbert can’t always make it to the stables, so Prattis takes care of some of his horses.

“Mil’s a good person,” Tolbert said of Prattis. “He loves the animals. He’s got rabbits, dogs, cats. He even took one of the cats home that he liked around here. He’s always adopting something.”

Tolbert and Prattis have two pit bulls named Frank and Bella that hang out around the stables. 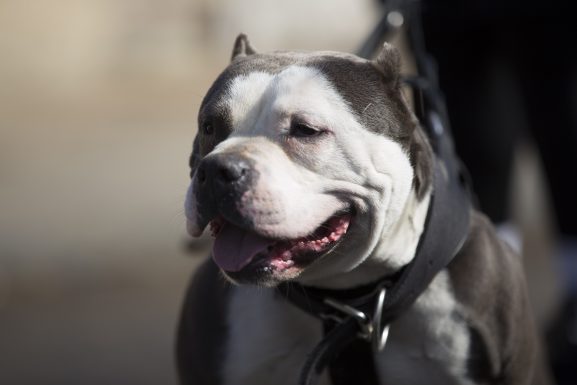 Kyle Anderson, 30, has also been riding with Prattis for years. Now a professional jockey at Parx Casino in Bensalem, Anderson still comes back to Strawberry Mansion every once in a while to ride and see his friends. He agrees with Prattis about Fletcher Street feeling like home.

“I used to always come here because it was like a group,” Anderson said. “They’d always have fun and talk and talk a little trash.”

Along with the fun and community that Prattis has felt at the Fletcher Street stables, it’s also there that he learned about responsibility. He also learned about mortality from watching horses be born and die at the stable. It helped him come to terms with some of the harder aspects of life.

“Being around here, stuff happens,” he said. “A horse dies … when I was younger I seen that, and when you’re a kid you don’t wanna see nothing die.”

Now, he helps the kids at the stable understand more about horses and what happens throughout the course of their lives and up to their death, and uses those lesson to teach them about life. During the summer, he helps kids from the neighborhood learn to ride. His kids are also part of the stable life. Prattis got his oldest daughter, 11, started riding when she was young. She’s now the same age he was when he started coming to the stables. 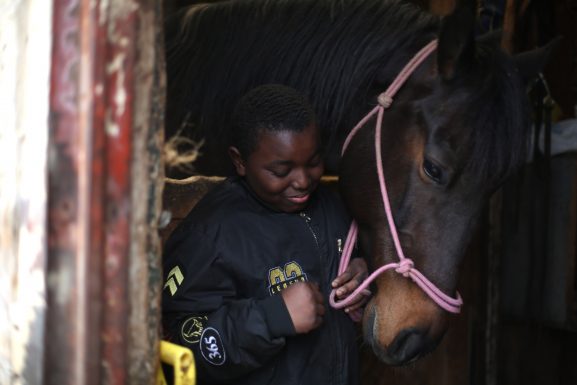 In regards to the future of the stables, Prattis hopes it sticks around long enough for him to teach more kids how to ride.

He doesn’t like to talk about it, but Prattis says every time he stopped riding he got into trouble. The stables helped keep him on a good path, and he’s thankful for that. 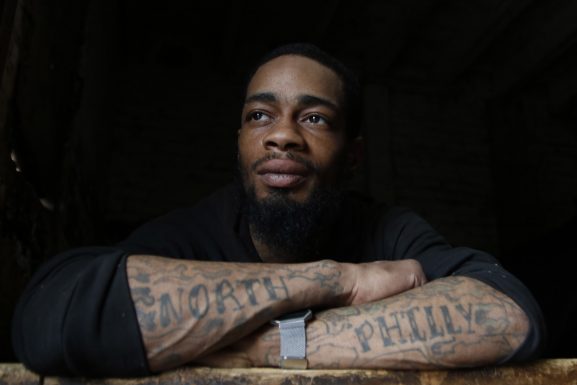 — Text, photos and video by Jennifer Kerrigan and Kaitlyn Moore.

Eighty-eight-year-old Gladys Meade, better known as Momma Meade, has been a vocal community activist and a guardian to countless youths in Strawberry Mansion for the past 60 years. Nearly every committee chair knows her name [continue reading…]