Ever since he was a caddy for middle- and upper-class white men in 1950s, Roosevelt Wilmore has been in love with the game of golf.

From the very beginning it was hard for him to find ways to play, given the color of his skin. Nonetheless, he and his friends did whatever they could to play the game they loved. “I remember we’d cut up branches we found, sharpen ’em. Real Stone Age stuff… If they don’t want you, don’t complain because you can’t play somewhere. Just make it on your own. If they can do it, I can do it.”

This positive attitude, coupled with his obsession for perfecting his swing and being out on the course or range, is what has motivated Wilmore over the past 55 years.

Not long ago–just before retiring–Rosey, as he’s known to his golfing buddies, fell ill and had to undergo several serious medical procedures. He underwent triple bypass surgery, dialysis, as well as other potentially life-threatening ailments. Many people in his situation simply put up their hands and give up. Others, blame God for their misfortunes.

But Rosey? All he needed was golf. 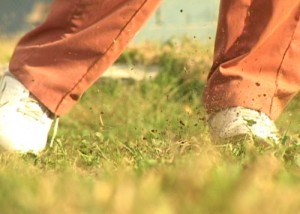 “What do I have to be mad at God for? I’m not mad at God. I’m happy he let me see the other side,” Wilmore said. “People don’t even realize what they’re missing.”

Tiffany Murphy, a native of West Philadelphia, fell in love with community organization and civic engagement during her childhood. Years later, she is now the coordinator for the Uhuru Flea Market and the upcoming One […]

https://vimeo.com/39947332] On the first Saturday of every month, the Mahogany Philly Fitness Club hosts a run/walk event on Kelly Drive. Mahogany Philly was founded by Jamaica Yancy, who started the organization at the beginning of […]

Kids who attend L.P. Hill Elementary School rarely get to experience life outside of Strawberry Mansion. The main reason for this is the parents’ economic status. They simply cannot afford to take their children on […]