The streets of Germantown are rich in history and beauty, but more recently they’ve become loaded with trash.

“There’s trash everywhere,” said Donald Carmichael, a resident of Germantown. “Some people just like to throw their trash on the ground, they don’t care about littering.”

It seems that you can’t walk a block along Germantown Avenue or side streets without running into some type of litter.

Aine Doley is working to clean up Germantown. She lives on Rockford Street with her sister. They are block leaders who encourage their neighbors to keep the street clean and to properly dispose of their trash.

“I’ve lived here since I was 5 years old,” Doley said. “I hate to see it go in the wrong direction.”

Doley said flyaway trash is the biggest problem on her street. People cause a lot of litter by throwing their loose garbage in a can without containing it properly.

“You’d never think that could be an issue, but if the trash men go to pick that up, it can become litter,” Doley said. 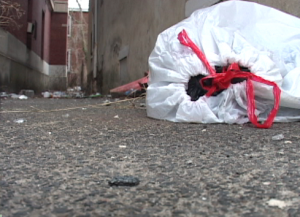 Garbage piles up on the streets.

Carlton Williams, the Germantown Streets Department commissioner, said trash bins have been removed from areas in Germantown in anticipation of the solar bins, but neighborhoods like Doley’s have yet to see them.

“We’ll take a look at it again to see if that’s an area that’s slated to receive Big Bellies or not,” Williams said.

Meanwhile, Doley said she’s continuing to stay in touch with the city to see when the new garbage cans may arrive, and she won’t give up on her mission to keep the neighborhood clean.

“It can become really filthy and nasty, so with the support of the city and the neighbors we’re going to make it work,” Doley said.

https://vimeo.com/22929842] In colonial and early America, it would have been hard to find a place where people of all races, religions and social statuses were treated as equals. That wasn’t the case, however, at Germantown’s [Read More]

For Alexis Hunter, becoming a business owner has been an idea that was a long time coming. Hunter, 25, and from Mt. Airy, had known she wanted to become a business owner, she just didn’t [Read More]

Germantown: A Place to Call Home

https://vimeo.com/37208697] For a woman of such a tiny stature, one would not think that Mary Ellen Graham could pack so much power. But when there is fortitude and heart behind what was once considered a [Read More]