At 17, Nelson Jones started to see his father in him and didn’t like what he saw.

Nelson grew up in a family with13 siblings and an alcoholic father who use to beat his mother. Nelson was deemed a juvenile delinquent because he had been in jail twice and because he beat his own girlfriend quite badly. He knew he wanted to change his ways, but he didn’t know how.

A chance meeting in the mid-1960s with legendary leader Malcolm X changed all that. “I went to visit Mosque 7 with a friend of mine in New York and I met Malcolm X.” Jones said.

After that meeting, Jones returned to Philadelphia and with one of his sisters he became a member of the Black Panther Party. The chapter covered the East
Coast from New England to New York. “I was a member with them throughout the whole ’70s,” Jones said.

After leaving the organization, Nelson started his own bakery and a mentoring program for young men called Building and Restoring In the Community. “Once I understood who I was, I began to understand my place in this life and in this universe.” Jones said.

“I try to tell young men, I’m not a dog or a nigga,” Jones said critical of slang terms used by many youth. 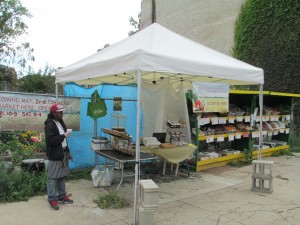 A few years ago Jones took over an abandoned lot behind his house and started to plant flowers, vegetables and fruit. He found that he had a lot of food left over, so he started Sharnel Market, named after his wife Sharon and himself.

With approvals from governmental bodies Jones received designations as a farm enabling his market stand to accept government food vouchers provided to low income residents. That designation provided Jones’ stand with another source of income and certain residents in his community with a source of fresh fruits and vegetables.

“The government called me an inner-city, mid-size farm,” Jones said. Anything left over from the market is donated to homeless shelters around the neighborhood.

The Sharnel Market is located at 21st Street and Susquehanna Avenue.

This market is open Thursday through Saturday from May to October.

Education: English Teacher Aims To Improve Opportunities Inside And Outside The Classroom

Kayla Conklin currently serves as the department head of the English department at Esperanza Academy Charter High School in West Hunting Park. That title is just one of many she holds at the school, mainly [Read More]

The loud sound of the collision of a rubber squash ball with a white wall reverberated around the squash courts at SquashSmarts, on the second floor of the Lenfest Center, as sweat dripped down the [Read More]

As a youth in Hunting Park, Kysheen Wilson was always looking for a place that he could get excited about. In 2007, the Philadelphia Police Athletic League began to use the building on N.10th St. [Read More]