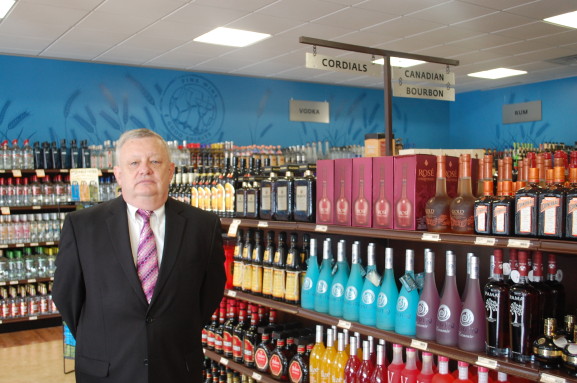 Spruce Hill gained a new liquor store at the corner of 43rd and Chestnut streets after much debate. Fine Wine & Good Spirits opened its new store on Sept. 10, replacing the Risque Video store and check-cashing business that had previously operated there.

The grand opening included a ribbon-cutting ceremony and free samples of wine and liquor from 11a.m. to 1p.m. The new 5,000-square-foot location was chosen after the chain’s store on 41st and Market streets closed in January of 2012 due to structural and landlord problems.

Regional Manager Jeff Stepp (above) is confident that the new store will meet the needs of local residents and University of Pennsylvania students. Before the opening, the closest liquor store was the chain’s 51st Street and Baltimore location.

“I think it will give them a nice, clean place to shop,” he said. “We have security, we’re well lit, we have top of the line products. They don’t have to travel into Center City. I think it’s beneficial for the community.”

Two Spruce Hill residents that attended the grand opening, Ross Ennis and Chris Edelman were somewhat critical of the new store’s wine selection and prices, but they said they’ll definitely be coming back because it’s now the closest liquor store in the area.

“I feel like it will probably benefit the Penn kids a lot more,” Ennis said.

Although several residents, including the Spruce Hill Community Association, supported the store’s proposal, opposition came from the Masjid al-Jamia mosque and the Muslim Students Association at Penn, as well as residents who worried about unwanted or disruptive activity around the store. As the Daily Pennsylvanian reported, the Zoning Board of Approval denied the store’s application after concerned neighbors voiced their opinions at public hearings. An appeal from the SHCA, which gathered more than 500 signatures in support of the store led to the ZBA reconsidering the application months later.

However, University City Beverage at 43rd and Walnut streets, directly across the street from the mosque, was unaffected by the issue. Owner Jonathan Kim said this is most likely because his store existed before the mosque. Kim said he doesn’t think Fine Wine & good Spirits’ more upscale selection and clientele will overlap with his stock of cheaper beer and soft drinks.

Fine Wine & god Spirits will have its own in-store security in addition to the Penn Police patrolling the area during operating hours.

Barry Grossbach, head of the SHCA zoning committee, said in an association-wide email, “Hopefully, this store will add to the commercial vitality of Chestnut Street and will ultimately be seen as a neighborhood asset to those on both sides of the debate over the store’s location.”

[vimeo 75108245] On Lancaster Avenue, stands a gated storefront with the acronym “LAVA” on a sign next to the door.  Many people pass by the storefront daily but few venture inside or even know that it [continue reading…]

Steve Sabo is the executive director of Point Breeze Community Development Corp. (CDC). Sabo has worked for over a year-and-a-half at the CDC, starting there in August 2014. A graduate of LaSalle University, Sabo not [continue reading…]