Spenser Colmbs has a bachelor’s degree in advertising and a certificate in neuroscience from Temple University. He has a friendly, honest demeanor that helps make his day job as an insurance agent a little bit easier. Colmbs is also an active musician, performing solo as well as in two Philadelphia-based bands, Three Man Cannon and Cherry.

Although Colmbs said Three Man Cannon and Cherry are fun for the social and touring aspects, he said he prefers the intimacy of creating and performing his solo work.

“There’s something more raw about being able to write and perform my feelings the way I want them to be performed,” Colmbs said. “You can’t really get that when you have so many voices trying to find compromise and balance.” 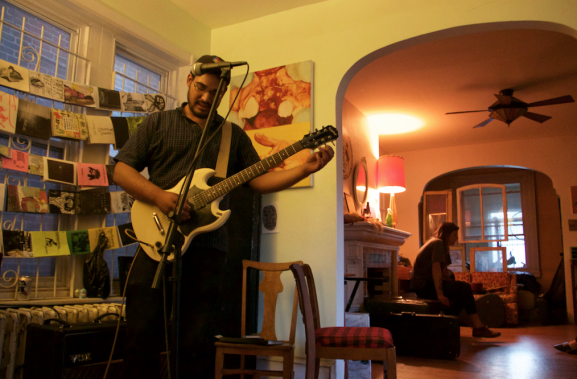 Colmbs’ personal discography is comprised of spoken word layered on looped base tracks. He gets his inspiration from life experience and personal journal entries, which he unapologetically shares with his audience.

“Spenser is one of the smartest, most talented people I’ve ever met,” said childhood friend and oftentimes musical comrade, Kiley Lotz. “We both grew up with parents who stressed music as part of our childhood.”

Lotz is a musician herself, performing under the pseudonym “Petal”.

“I’ve asked him if he would want to come tour with me or play a show with me, but he hasn’t agreed yet,” Lotz said. “Spenser is always willing to help me out but I think his music is more personal for him and he needs to feel some control over.”

After a month-long tour through the Northeast and out to Chicago with his band, Three Man Cannon, Colmbs has found some solace in knowing that he can work on music that is separate from what he gets a profit from.

“My music is a reflection of where I am in life and right now I have been heavily focused on my solo stuff, just because I find it easier to be in my own head,” Colmbs said. 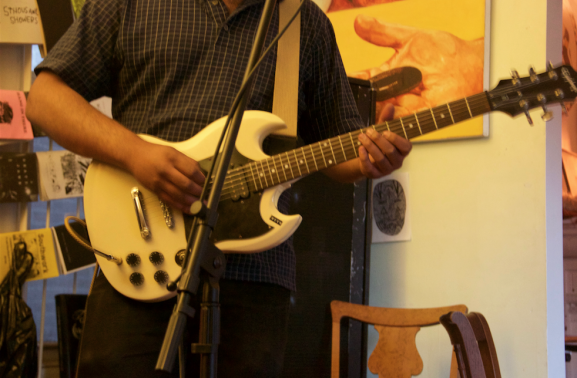 This year’s West Philly Porchfest was the perfect place for Colmbs to some of this more personal work. Porchfest is a DIY music festival based in the neighborhood that offers free musical performances on residents’ porches.

Spruce Hill resident Sarah Meyers was an attendee at the June 3 event.

“I haven’t heard Spenser play before but I’ve been excited to see him perform since my friends talked about a performance he did at Baird Mansion a few weeks ago,” Meyers said. “I try to see as many shows as I can around here since all of the house venues in west Philly are slowly getting shut down.”

This year, Colmbs played at a house venue called The Mitten. The house was recently sold to a new owner and the fate of the place as a haven for artists and interested audiences rests in the new owner’s decision of whether to continue renting out the home to tenants. 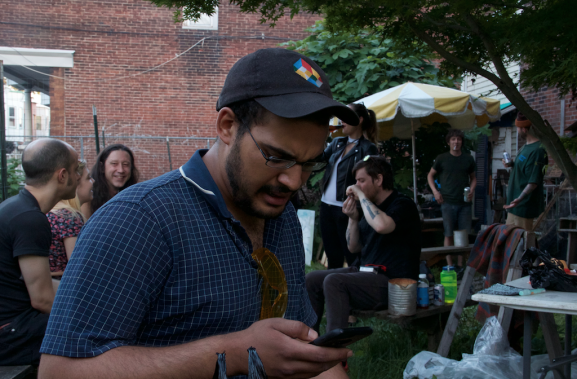 “I’ve never played The Mitten before,” Colmbs said. “It’s upsetting to see house venues getting shut down especially when there are so many people who benefit from having them around. I’m just glad I got to play here before they stopped it all.”

Colmbs said his music demonstrates a more intimate and emotional side of him that people typically will never notice about him.

“I’ve known Spenser for about a year now and seen the other bands he plays with,” said resident of The Mitten, Josh Mackie. “He’s so friendly and outgoing and his bands are primarily harder style music. I never would have thought he was this passionate of a guy. His solo stuff is really powerful.”

Colmbs’ solo career has not yet taken off, but he is far from concerned.

“I love being on tour because I get to meet a lot of people and hang out with my best friends, but I like playing smaller shows too,” Colmbs said. “I don’t think my music would be as effective in a larger setting since it’s more emotional and honest right now.” 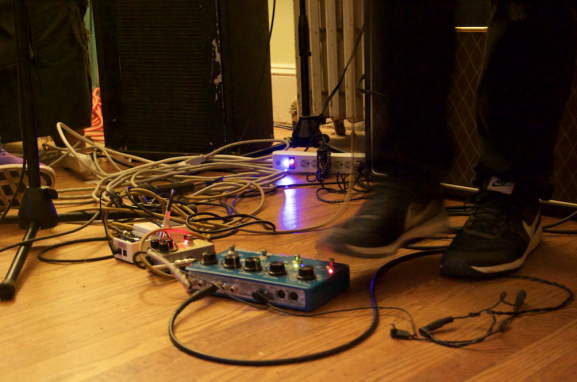 Colmbs is developing a voice he wants to use to inspire and create reactionary responses with.  He read a journal entry about a death in his family at his Porchfest performance. As he read the piece, the small crowd in the living room either shut their eyes or stared directly at him, trying to actively listen to everything he had to say.

“I’m not sure I could ever publicly read something from my journal,” Meyers said.  “That takes an extreme amount of courage that I wouldn’t have, not to mention the linguistic skill Spenser has.”

Meyers was one of several people to approach Colmbs after his performance to tell him how much it meant to her that he shared his experiences. It was an intimate gathering of people congratulating a stranger for getting extremely intimate with them.

As for the future, Colmbs’ plan is just to keep on playing.

“Right now I think I’m going to work on some new stuff, but you can find some of my music on Bandcamp now,” Colmbs said. “People keep telling me to get a Myspace, but I think that platform is reserved for a certain period of time only.”

[vimeo 75108245] On Lancaster Avenue, stands a gated storefront with the acronym “LAVA” on a sign next to the door.  Many people pass by the storefront daily but few venture inside or even know that it [Read More]