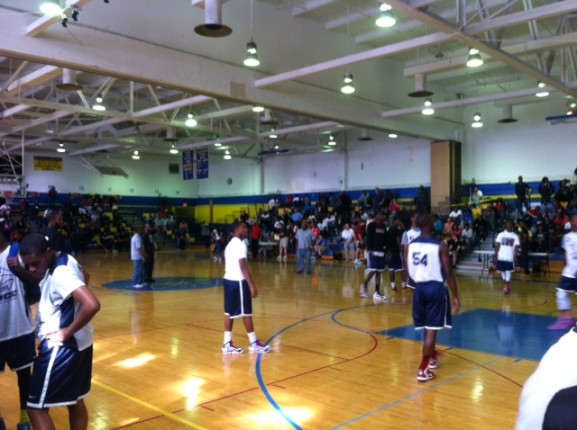 At the Philly vs. New York All-City Basketball Classic last month, the first game of the day – between the two cities’ best high school freshmen – was not supposed to be much more than an appetizer for the day’s later matchups between upperclassmen.

But Quade Green made sure that anyone who got to Ben Franklin High School early enough was surely entertained.

The 5-foot-10-inch freshman guard from SS Neumann-Goretti High School asserted himself early, scoring eight points on the first four Philly possessions before waking the crowd with an alley-oop off the backboard to teammate D’Andre Vilmar.

“They’re in my city, so I had to go in there and take over,” Green said.

Green opened the second half by scoring Philly’s first five points. Despite an 80-64 loss to the rivals from up Interstate 95, Green finished with a team-high 20 points and five assists. He was also voted Most Valuable Player for Philly in a unanimous decision.

Antwain Wynn, Philly’s Class of 2017 coach and Green’s assistant coach at Neumann-Goretti, was impressed by the underclassman’s ability to perform on a bigger stage.

“They were double and triple-teaming him in the second half so he was a little fatigued,” Wynn said. “We were a little smaller so he had to do a little more than normal today for us.”

Green showed composure and poise in a game stacked with future Division I college players on both teams.

“It was good to play them in here,” Green said of his competition from New York.

Green, along with his mother, made the decision to attend the Catholic school in South Philly and is expected to play right away alongside touted prospects Vaughn Covington and Lamarr Kimble.

Scouts predict that he will start hearing from major colleges after a year or two of playing at the high school level.

“The whole thing with him is staying in shape,” Wynn said. “Once he hits the weights a little bit, he’ll be okay because the talent is already there.”

Scouting websites and local analysts rave about his quickness, court-vision and range with his jumper. All of that and more was on display as the freshman connected on three three-pointers and beat his defender with a strong first step multiple times, earning him regular trips to the free-throw line. Green showed the crowd at Franklin High that he’s capable of playing with the best either city had to offer.

“His future is up to him,” Wynn said. “If he works hard, the sky is the limit for him. Right now, he is still learning how to become a young man.”

Every summer, Bringing Everyone Together (BET) holds its Powerball basketball league for children ages 14 and under at Logan Elementary School, located at 1700 Lindley Ave. It gives the mentors at BET an opportunity to [continue reading…]