With summer approaching, more people will be taking their fitness outside, be it in parks or on the streets, on bikes or on feet.

But if you’re searching for somewhere out of the ordinary to flex your muscles, Fitville at 33rd and Dauphin streets offers a unique and DIY outdoor fitness training experience led by Chuckie Hilton. 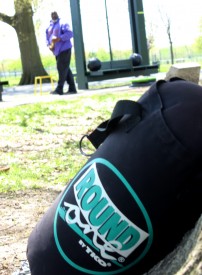 Hilton stands out from the crowd, mostly because he’s big and strong, but also because he’s driven and it shows in his work ethic.

The 1987 graduate of Cheney University, who currently works as a bus operator for SEPTA, also specializes in physical training. His bellowing deep voice helps train people outside along Boxers Trail.

Amidst piles of workout equipment sprawled along the grass and trail, and with the assistance of his life partner Paula Parker, the couple oversees and operates Fitville.

The fit couple maintains the outdoor gym that consists of everything from kettle bells and punching bags to tractor tires, free weights and a bench press on weekends, when the weather allows.

They request an $8 donation for using their equipment and training help. Parker explained that if they had all of their equipment on display, it would cover the whole field – and points behind her to a space roughly the size of a football field at the edge of Fairmount Park. When the equipment isn’t outside, it’s mostly in Hilton’s home just across the street from the park. 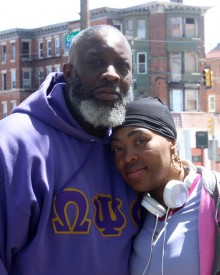 Although the couple aims to move the business to an indoor location eventually, somewhere preferably in or near the community, the location right off Boxers Trail was almost to fitting considering the history of work ethic regarding the trail.

Being born and raised in Strawberry Mansion, Hilton has faced challenges from growing up in the projects to dropping out of high school. But he thought back to a couple he met from Princeton, New Jersey, who took the local kids to play tennis in Strawberry Mansion. Eventually these same people became a part of his life, guiding him to get his GED and eventually attend college.

Now, long after after graduating and returning to the community, he tries to pay it back, explaining how his life has made a “360.”

“You can’t get to nowhere without anyone’s help,” Hilton said.

He said his plans for the future include trying to involve his program in the newly reinstated Strawberry Mansion High School football program. He wants to show the kids how to work, as he knows how important influential people and guided training can be.

To connect with Hilton or Parker, visit Fitville on the next nice weekend day or send them a Facebook message.

The Springfield Missouri native knew he loved being around books, and now he gets to live his dream every day while helping the community expand on their resources. [continue reading…]

[vimeo 60130361] St. Anne’s Senior Citizen Center, an organization which has provided locals with activities and services for more than 30 years, strives to promote wellness and health programs to keep seniors part of the community [continue reading…]

Casa Soccer League is more than just an amateur soccer league. It is also a nonprofit organization run strictly by volunteers who are dedicated to maintaining Casa (Spanish for house) as an affordable, organized, competitive [continue reading…]