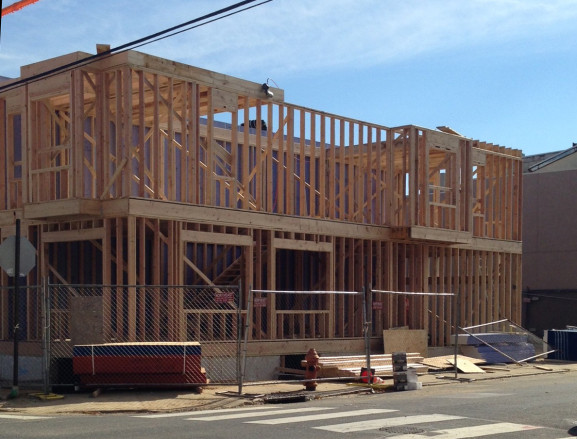 The construction of new houses on Reed Street in Pennsport is expected to bring new and younger tenants into the neighborhood. Long-time residents do not mind the changes but there are a few issues.

“This has been going on since this summer,” Jim Daly said, a resident of Reed Street since the 1930s.

The construction for 12 new houses by Harman Deutsch at the intersection of Reed and 3rd streets stopped when one of the buildings went beyond the three stories limit.

“It’s supposed to be three stories,” Daly said, looking up at the unfinished construction. “That looks like five or six!”

The site of the new homes was formerly the St. John the Evangelist Church, where Daly was a member.

Other problems occurred over the past few months that affected long-time residents along the same block as the construction site. Since current residents have older homes, the impact of the construction ruptured some of the maintenance of the older buildings.

“They shook me outta bed one time,” Daly said. “They cracked all those holes that we filled in. They’re all cracked all over. So they gotta do it all over again.”

A block away is another construction site for six new houses at Reed and Second streets. Long-time resident Bob Higginson sat outside his home a few buildings over, annoyed about the construction for other reasons.

“Well, thank God we have a good city,” Higginson said. “’Cause they’re building houses with garages. And if you go around the neighborhood, all the new homes in late years—nobody uses their garages.”

The new parking garages caused anger within the neighborhood for those who lived on Reed Street most of their lives. The garages will make it more difficult to find convenient parking for others on the block.

“People around here are screamin’ and they gotta park three, four blocks away and ride around lookin’ for parking,” Higginson said.

The two construction sites might be different but both lifelong residents agreed it is not the building of new homes in general that is the problem in Pennsport. The concern is the price of the new homes, their architecture and the people they’ll bring.

With Pennsport being considered by many one of the new and upcoming areas to live, it is inevitable that abandoned areas will be transformed into new homes. The approximately 18 homes being built along Reed Street will help populate the area. But for some lifelong residents, it could have been done a little differently.

The Landvest rent-to-own real estate scam in Kensington has only begun to take its toll on the community. With several open legal complaints underway and many of the over 400 Landvest properties changing ownership, it [continue reading…]

For immigrants involved in the legal system, finding an adequate court interpreter from an online roster might seem like an easy task, but others may gasp at the low number of translators for their native language. For example, [continue reading…]