A challenging curriculum and personal investment in the young men of the Cobbs Creek neighborhood is what Boys’ Latin of Philadelphia Charter School offers to its community.

Located at 55th Street and Cedar Avenue, Boys’ Latin was established in 2005 by the school’s CEO, David Hardy. Hardy had a vision of starting an all-boys charter school to address the unique academic and social needs of urban boys. It’s is the only single-gender public school in West Philadelphia, and its signature program is the mandatory four-year Latin requirement. 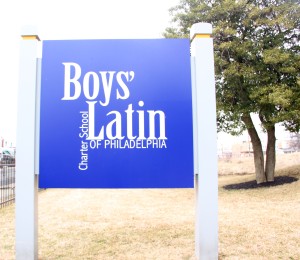 “We teach them Latin because it is hard,” said Principal Noah Tennant. Tennant has been with Boys’ Latin since 2011 and has watched the evolution of those who enter as freshmen and leave as graduates.

Each student is required to learn the school’s pledge in both English and Latin. Boys’ Latin prides itself on ranking number 6 in the city of Philadelphia in college matriculation, especially among young men of color.

The principles of education and brotherhood are stressed at Boys’ Latin. One of the ways the school works to uplift its students is by instilling a sense of pride in them through interpersonal relationships, as well as through a dress code.

The young men are required to be in uniform, wearing the school’s official blazer, slacks, dress socks, shoes and tie. The Boys’ Latin tie holds a special significance among the students.

“The normal school tie is maroon and blue,” said senior Joziah Green. “My tie is full maroon with the school’s emblem at the bottom. This signifies that I have been accepted into college.”

The young men who come through Boys’ Latin are not only challenged in the classroom but are encouraged to take the same lessons learned and apply them to life outside of the school’s four walls. Many alumni keep close ties with the school and its administration.

“I feel fortunate to serve as principal here, where we have the strongest faculty in the city and students who are truly committed to the mission of our school,” Tennant said.

Mayor-elect Jim Kenney met residents of North Philadelphia at Central High School in the first of a series of five town hall meetings taking place throughout the city. Central High, located in the Logan neighborhood, […]

Comcast  is one of the country’s most prominent entertainment and communications companies. Comcast decided to share its great success and give back to the community. Because of this, Comcast helped to make one organization’s dream […]