South Kensington has experienced a high influx of new homeowners, renters and sustainable construction. The new people live amongst the longtime residents. The pattern of gentrification has increased the need for community smoothing through outreach and activism.

La Finquita (The Little Farm), an urban community garden space located at 438 W. Master Street, is an all-inclusive cross-cultural revitalization project for all members of the South Kensington community to partake in.

Zach Prazak, one of La Finquita’s three garden coordinators, became involved with La Finquita in 2011 upon moving to the South Kensington area. 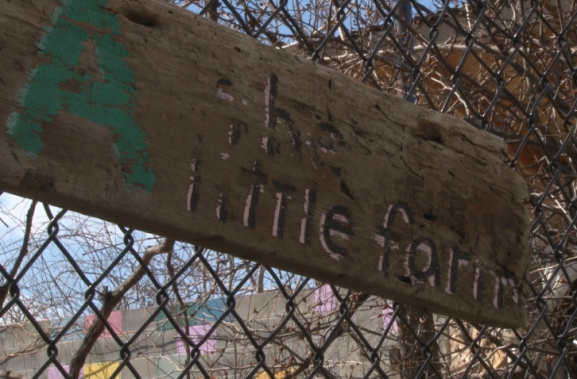 “Five or ten gardeners were working on the garden at that time,” said Prazak. “One guy in particular, a Puerto Rican man named Paco, held the key to the garden. He was the MC of the garden if you will. I met Cliff Brown, one of the other garden coordinators, who had just met Paco around that time. Paco insisted that we get involved with the project and so we did.”

The plot of land, between 4th and 5th streets, was the site of an abandoned factory.

“A radical organization called the Catholic Workers Movement – started in the late ’80s early ’90s – reclaimed the land,” explained Prazak. “They saw that no one was using it and they just started to gear it toward their own purposes. Four to ten people were involved in the initial startup of the project. They bulldozed the land and got rid of all the bricks.”

The Catholic Workers Movement’s involvement with the community garden lasted for nearly 20 years before dwindling, although they are still very much an active force in the neighborhood, providing underserved people in the area with cooked meals and coffee.

La Finquita partnered with the Pennsylvania Horticultural Society in 2012.

“They gave us compost start and soil as we needed it,” explained Prazak. “We later applied for that grant and we got it.”

Within the first year, they sold more than 700 pounds of food, Prazak said.

“It’s been a privilege interacting and meeting people through that process,” said Prazak.

When walking through Strawberry Mansion, you may notice an overabundance of vacant properties and abandoned houses. It was not always like this. Due to redlining, a racist collusion between banks and city government, where people [Read More]

When Elizabeth VanUmesseren recollected her views about a vacant lot on the corner of Master and Lawrence Streets many years ago, she said plans for cultivating the lot into a community garden didn’t look promising. [Read More]