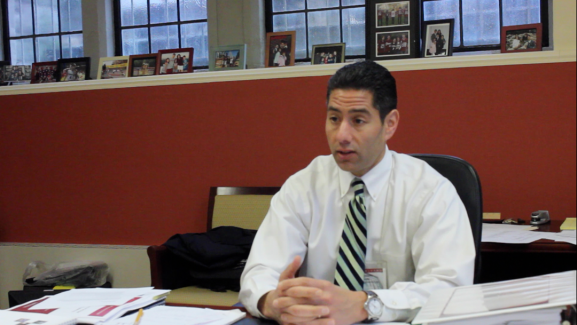 With an undergraduate population of about 28,000 and a trend toward becoming a more residential campus, Temple University has seen a lot of construction throughout the past few years. A new 1,200 bed dormitory, Morgan Hall, is one of those projects. Here are five people who play key roles in the neighborhood’s development.

Kaiser, who first started working for Temple in 1991, was named the chief financial officer in December. He said the reason for the increase in construction over the past few years was that bringing in more students is the best way to bring in more money, since administrators don’t want to raise tuition and can’t always count on getting more money from the state.

“Once Visualize Temple is officially done and approved, we’ll know where to … focus efforts with the commonwealth to provide us with additional capital,” Kaiser said.

Theobald was inaugurated in October and has communicated a new vision for Temple’s Main Campus, one that includes a $190 million library and possibly even an on-campus football stadium. Speaking at a public event in the fall, Theobald said Visualize Temple, the university’s master plan that will be released at the end of spring, would “likely, at some point” include a football stadium.

Along with Theobald, Creedon is one of the key figures in the execution of Visualize Temple. Before coming to Temple in 2011, he was the secretary of the state’s Department of General Services. Creedon has overseen projects like Morgan Hall and the new science and technology building.

Crawford has owned property near Temple’s campus since 2003. He said the market for off-campus housing has changed from a small to a competitive market. Crawford owns more than 30 properties from 15th and Thompson streets up to 15th Street and Susquehanna Avenue, including properties as far west as 17th Street and as far east as 9th Street.

“We’re all over the place,” Crawford said.

Starting with just one property in 2006, Pizzola now owns more than 30 properties near Temple’s campus. Overall, he said hundreds of properties have developed off campus since he got into the business. The cost of renting, however, hasn’t changed. Pizzola said he charges between $500 to $600 per bedroom.

“There has been some push back on price,” Pizzola said. “You might be able to get $600 a bedroom in the past if you’re renting an older property. Now you might have to drop to $575.”

Northeast Philadelphia: Five People Making a Difference in the Community

Philadelphia’s overlooked school doesn’t want to be overlooked anymore. Nor should it be. After all, that large institution on North Broad Street is one of the state’s largest employers. It has a well-deserved reputation of […]