After growing tired of baseball, Philadelphia native Steven Holmes decided to enter into the lacrosse world. He fell in love with the sport.

With years of experience in competitive college and professional box lacrosse, an indoor version of the sport, Holmes decided to switch roles and start coaching. His passion for coaching and love of the game led him to create a program that would help kids garner their skills to compete at high levels in the future. In summer of 2013 Holmes officially instated the Fusion Lacrosse program. The former Philadelphia Wings player constructed the program to help youth lacrosse players in the Philadelphia area reach their full potential.

As curator of Fusion Lacrosse, Holmes organized a group of “player-coaches” which includes Kevin Crowley, a current player for the Philadelphia Wings. Together they created a curriculum and training philosophy that centers around experience on the playing field.

“We want to see them grow better throughout their careers,” Holmes said. “It’s not something that you can get better at in a day, you get better over time and that big picture is definitely something that excites me and Kevin.”

Practicing at different indoor field facilities around the Philadelphia area, the player-coaches attend every session and act as mentors to the young athletes.

“Our passion for coaching and our professional experience is something that we can bring in,” said Holmes. “We believe that if we do a great job from the ground up and we’re there, then we are guaranteed to be successful.” 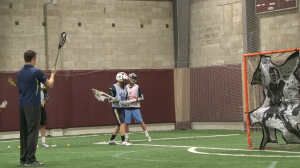 Jim Robinson, a father from Horsham, Pa, has two sons who are enrolled in the program.  Robinson says that he has seen improvement in both of his sons’ game from Fusion Lacrosse, despite having enrolled them in other programs.

“I think a lot of parents out there are looking for programs like this,” said Robinson. “Especially with two professional athletes training the kids on how to play and play to their best ability.”

Fairly new to Fusion Lacrosse, Robinson believes that their philosophy is what works best for him and his family.

“I think being a parent is one of the hardest things to do in the world,” said Robinson. “When you involve your kid in a program with Steve and with Kevin, its not just on the field, its off the field too because those two guys are top notch role models for a lot of the youth playing lacrosse.”

The Fusion Lacrosse organizers look to expand their program in the future and hope to change how traditional lacrosse is viewed.

“These kids and their development is going to be huge,” said Holmes. “Hopefully with the box lacrosse exposure we’ll start to see even the college game change.”

The Mt. Airy Art Garage (MAAG) is a community organization unlike Daisy Juarez has ever been involved in.
“We have visual arts, performing arts, literary arts, we even have a quilting club,” she said. “It’s a multifunctional garage.”
Juarez became a member last year after moving to Philadelphia. An artist herself, Juarez said she was looking to join an organization similar to the watercolor society she was part of in Illinois – a group where she could connect with fellow artists as well as with the community – luckily, she discovered the Art Garage.
“We’re really all about community and creativity,” said Linda Slodki, president and cofounder of MAAG. “Our goal is to bring artists out of isolation.” [continue reading…]

The Police Athletic League of Philadelphia was created in 1947 by a police sergeant who wanted to create a baseball team made up of neighborhood kids who wanted to play. Since then, PAL has worked [continue reading…]

Terrariums hang from the ceiling and green plants are everywhere inside City Planter. The former warehouse on 4th Street neat Brown is now a gardener’s sanctuary, with shelves of green plants and colorful flowers spilling out to the sidewalk, bringing [continue reading…]