Three organizations have teamed up to revitalize and create a “Model Block” on East Girard Avenue in Fishtown. The area divided by a wide street is now home to several small businesses, but with the help of the PNC Foundation, the New Kensington Community Development Corporation (NKCDC) and Local Initiative Support Corporation (LISC) their businesses will look more appealing.

The Model Block program was created to become the blueprint for other blocks, and to encourage store owners to freshen up their storefronts in order to improve the neighborhood aesthetic and attract more business.

This is not just a local endeavor; LISC has made it a national effort. The organization’s mission is to provide financial support to non-profit organizations, and the Model Block is a part of the LISC’s Corridors of Retail Excellence (CORE) project. The project  funded by a grant from PNC  provides LISC selected sites with data reports, technical consultants and market analyses.

“Philadelphia LISC has been working on commercial corridors with neighborhood partners like New Kensington for more than 10 years,” says director and Fishtown resident Andrew Fishkoff.

When it came to funding a local community group within Fishtown that had developed strong relationships within the community, the NKCDC was the acronym that seemed to roll off every small business owner’s tongue.

The NKCDC works to foster economic and community development within Fishtown. The 28-year-old organization provides workshops that pertain to small business development and facade improvement.

“The storefront-improvement program and workshops that happen are business and economic development programs that we help organize,” says Diana Jih, the community relations specialist for the  NKCDC. “Our housing department has ongoing home-buyer education workshops, and those are very popular.”

Some of these programs or workshops include 8-hour courses that take about two days to complete and prepare people for home ownership.

“We receive positive feedback saying that we are either experts in the topic or that we know who to direct people to,” says Jih.

“New Kensington [CDC] has a relationship with the business owners and the residents,” says Frishkoff.

With NKCDC’s dedication to economic and real-estate development in Fishtown and LISC’s mission to curating funds for communities through the PNC Foundation’s CORE project, they were ready to revitalize.

The foundation provided the $98,000 grant, brought in by LISC and appropriated by NKCDC.

One of their first statements of change? A fence. The interactive fence was made with the hopes that it would be used as a bench, easel, clothing rack for businesses on the block and, more importantly, a bridge between the businesses.

“They put little shelves and modules in place that could be moved around where you can have displays, you could sit or stand or put your cup of coffee down if you wanted,” says Frishkoff. “Where if you wanted to display materials or goods that somebody was selling you could use the shelves for that.”

It’s a standing testament to the adage: if you build it, they will come. Co-owner of Street Glitter  Gallery Tami Horvath opened her new business around the same time they built the fence, six months ago. She admits she hasn’t seen any immediate changes.

“This winter has been a little rough so it’s hard to judge,” says Horvath. “It seems that on every nice day we have the foot traffic is really, really good.”

Horvath worked with the NKCDC to get the proper permits for signage when it came to remodeling her storefront. All eyes are currently on the Model Block as they wait to see what other changes will be made. They’ve garnered attention from the press and Mayor Michael Nutter. 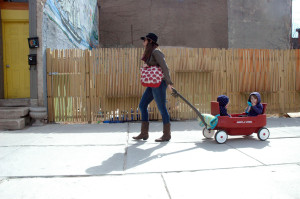 “Mayor Nutter came to visit us on Small Business Saturday in November and he did a tour of Fishtown along Frankford Ave. and Girard,” she says. “He stopped in to see what new stores had come about and support local businesses and to chat with us for a quick minute.”

However, for Fishtown residents the fence represents a change the neighborhood has been undergoing for years.

“I’ve been in Fishtown 20 years now, [and] the changes are really good,” says Patrick McGowan, who currently lives above Street Glitter Gallery, adjacent to the interactive fence.“It’s come a long way.”– Text and Images by Sofiya Ballin and Layla Jones

Philadelphia presents itself as a city where artists can not only do what they love as a career, but they can also live comfortably while doing so. Without the people who help network, teach and [continue reading…]

When Jeannine Cook opened Harriett’s Bookshop in Fishtown last February she was taking two risks: opening a small independent bookstore in an Amazon-dominated era and opening on the cusp of a global pandemic. “COVID has [continue reading…] [continue reading…]

Filth and trash have become an increasing concern as the Fishtown population has grown in recent years. The answer to this issue is the Beautification Committee, a sector of the Fishtown Neighbors Association (FNA), whose [continue reading…]