The development of Penn’s Landing is something that has been plaguing planners, developers and administrations for the past few decades. Since construction began in 1967 to turn the previously wharf-ridden, eastern portion of Old City into a riverside recreation area, developers have come up with several plans to help the number of visitors to Penn’s Landing grow.

Penn’s Landing has seen its share of construction let-downs. In 1995, the Simon Property Group began construction on a large entertainment and retail complex on the site. The proposed $190 million project eventually fell through, and only remnants, such as access ramps remain. Also, a large concrete archway that welcomes visitors to Penn’s Landing remains. Dubbed “Pi,” it was originally the foundation for an aerial tram system to Camden. The project never came to fruition. 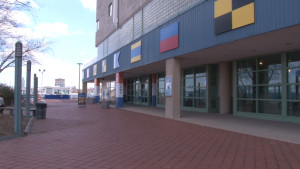 The building that currently houses the Independence Seaport Museum opened in 1976, vacant without any planned clientele. Essentially, the building was built for no actual purpose. After being used by a local civic association for several years, the museum moved there in 1995.

The DRWC has since put together a master plan. The 30-year, $770 million project will develop sites along the Delaware River waterfront. The plan, which was released in 2012, includes the construction of a shopping district and 7-acre park that sits directly on Penn’s Landing.

“I’ve seen a lot of plans, and I’d say that the earlier ones didn’t succeed because they were probably just too big,” said John Brady, president and CEO of the Independence Seaport Museum.”This project seems to be broken up into smaller, more doable pieces.”

Currently, Penn’s Landing is more of an event-based destination in Philadelphia. With the exception of the seasonal river rink and the Independence Seaport Museum, which sees 70,000 visitors a year, events are typically limited to concerts and holiday events like firework displays.

Some events can bring more than 30,000 people to Penn’s Landing but the challenge lies in making Penn’s Landing a place where people want to go on any day.

“Right now, Penn’s Landing isn’t a place where people go down and set up a picnic,” Karen Thompson, planner and project manager for the DRWC said. “We’re working on making Penn’s Landing an everyday destination.” 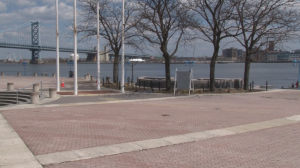 In addition to the park, the DRWC’s master plan also calls for the construction of residential properties along the waterfront.

“The other thing I like about it is that they’re talking about creating a neighborhood down here, which would be really good for us and the waterfront in general,” Brady said. “As things are now, it’s too seasonal and not architecturally friendly enough.”

Although the development of the entire waterfront is a 30-year goal, the DRWC is currently working to extend bridge caps from Old City into Penn’s Landing to make it more accessible to visitors.

“We want people to feel like they’re at the waterfront when they hit Front Street,” Thompson said. “We’re working on capping bridges so people can easier access the waterfront,” she said.

The caps between Walnut and Chestnut Streets are proposed to be fully connected at the end of the master plan. The connected caps would create a grassy overpass over Interstate 95 that extends a park from Front Street to the edge of the Delaware River.

Other businesses believe that there is a benefit to the overall plan of renovating Penn’s Landing.

“They’re trying to change things,” said Michael Grims, the director of operations for Moshulu Restarurant, a restaurant housed in a four-masted ship that is docked at Penn’s Landing. “We definitely have an interest to do whatever we can to entice the population to come to the waterfront. We’re going to continue working with our neighbors and see what’s best for Penn’s Landing.”

So far, only landscape improvements on the Great Plaza have been made. According to the DRWC’s master plan, some proposed near-term goals include predevelopment work on the basin near Penn’s Landing, while development on the park remains a likely mid-term goal.

A nonprofit nearly two centuries old is still working hard to serve the men who come into one of the world’s largest freshwater ports. The Seamen’s Church Institute of Philadelphia and South Jersey has made [continue reading…]