Imagine the fear, frustration and mistrust you might feel upon being called ma’am when you’d clearly rather be called sir – or vice versa. This is the struggle transgender people of Philadelphia have been fighting.

“In trans communities, there is a sense that police think that trans lives don’t matter,” said Adrian Lowe (above), a lawyer at the AIDS Law Project of Pennsylvania.

The National Coalition of Anti-Violence Programs, NCAVP, defines transgender as, “an umbrella term used to describe a group of individuals whose gender identity and how it is expressed, to varying degrees, are different than the sex assigned at birth.”

With the introduction of the Philadelphia Police Department’s Directive 152 in December and the gradual implementation of it, the plan was to alleviate that mistrust and prevent the officers from directly or indirectly causing offense and frustration in the transgender community.

“This new policy focuses on making sure officers are professional in their interaction with transgender individuals and treat all people with the courtesy and dignity that they deserve as human beings,” said Officer Christine O’Brien of the Philadelphia Police Department. 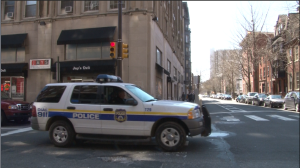 “The purpose is to make sure that we are respecting the rights of all people and to make sure we have a policy in place to ensure this,” O’Brien continued.

According to O’Brien, Deputy Commissioner Kevin Bethel worked with members of the LGBT community to look over the directive and make sure the basic definitions as well as policies being implemented were adequate.

“He has worked close,” O’Brien said, “with the DA’s office, Penn Behavioral Health and others in creating a protocol for (the) department to ensure all individuals are treated fairly.”

When an officer refuses to use the name which someone identifies but rather calls them by their birth name that they may have shed years ago, the humiliation only deepens at not being taken seriously.

“Officers will not exhibit any bias or prejudice,” the directive states, “or discriminate against an individual or group of members based on their actual or perceived sexual orientation, gender or gender identity/expression.”

There are those who felt this directive was badly needed.

“People in Philadelphia, when I have talked to them about the way police react, especially to African American tran-swomen, they think I’m making [the discrimination] up,” said CA Conrad, a poet from Philadelphia who has participated in movements against transgender violence.

Now the trans community may be better protected by the directive, which instructs officers to actually ask individuals what gender they identify with and to respectfully refer to them in that manner, without degrading them.

Another component the directive deals with is that of the transportation and housing of transgender people upon arrest.

“Whenever practical, transgender arrestees will be maintained in single cell occupancy,” the directive states.

This means that transgender people will be respected by being identified with the pronoun that they wish, but still will be housed and transported separately from other inmates. For some, this is considered a win, while for others, like the poet Conrad, this is considered cruel and unusual punishment, as solitary confinement is usually a punishment in jails.

O’Brien sees the directive as a positive step forward for the department.

“Our department has continuously taken measures to make our officers and department better, while building positive relationships with all communities,” she said. “This is yet another effort in that direction.”

Some consider the part of the directive that deals with the media to be the most important, however.

“In incidents involving transgender individuals, personnel will refer to the individual using the name based on their gender identity… [and] use pronouns as requested by the individual,” the directive states.

“Transgender women, especially sex workers, are scared to go to the police,” Conrad said. “They might not treat them right.”

Directive 152 came just a few months before the seven-year anniversary of the death of Erika Keels, a local transwoman sex worker, who was killed in 2007.

It was sometime in the early morning of what was shaping up to be a chilly March day. A woman was somehow, inexplicably, in the road at the corner of Broad and Thompson streets in North Philadelphia. Some say she was thrown there, some say she was just walking there. Everyone agrees on what happened next: Roland Button, then 70-years-old, hit Erika Keels, then 20-years-old, with his Lincoln Town Car.

Whether it was an accident or intentional may never be clear. What is known is how Erika’s death was dealt with. Her friends and loved ones took up her case, calling it murder, in the form of a campaign called Justice for Erika.

Through this campaign, the police were pressured to reopen the case of Keels, which they’d initially shut after taking Button’s statement that he hadn’t been wearing his prescription glasses and had not seen Keels.

The police again ruled the investigation as an accident and closed the case.

“I think people still understand what happened,” said Adrian Lowe, the attorney. “I don’t think that has changed.”

Lowe knew Keels when she was a client of his. He described her as a self-possessed, resilient young woman. He attributed Keels’ death to the circumstances she was forced to survive in because of her status as a transwoman. He doesn’t just blame the police for not convicting Button, but gives blame to all of the organizations that he says failed Keels.

“All of the systems that were supposed to keep this child off of the street corner at three o’clock in the morning?” he said. “None of those systems worked.”

Lowe shared one of Keels’ stories about her constant battle at being seen for who she really was, a woman.

“Every time I saw her, one of her questions was, ‘Do I look real?'” Lowe said. “I know what she meant was, ‘Can I move through the world with safety, telling people the truth about who I am, which is that I’m a girl?’ This was a young woman and she knew who she was. She knew she was being treated badly.”

Directive 152 has the power to help members of the transgender community who, according to the NCAVP, are 1.67 times as likely to experience threats and intimidation in comparison to non-transgender LGBTQ survivors and victims.

This information was released through the NCAVP’s 2012 Report on Lesbian, Gay, Bisexual, Transgender, Queer and HIV-Affected Hate Violence.The report covered 2,016 incidents of violence against LGBTQ people and 25 homicides in the LGBTQ community nationwide in 2012. The 25 homicides were the fourth highest total of LGBTQ homicides ever recorded in a year.

According to the NCAVP release, in fifty percent of hate-violence homicides in 2012, the victims were transgender women. Transgender people were one of the most victimized communities among the LGBTQ population. Transwomen were more than two times as likely to experience discrimination as compared to survivors and victims who were not transgender women. Transgender people of color were almost two-and-a-half times as likely to experience discrimination compared to white survivors and victims.

“Things were just getting worse for African-American transwomen in Philadelphia,” Conrad said. “There’s zero tolerance for them by the police.”

“There are systems that are supposed to catch these people, but they slip through the cracks,” Lowe says in relation to these statistics.

The NCAVP report backs up the need for Directive 152 in Philadelphia by clearly showing that there is a national problem concerning how police treat transgender people, with violence being the most extreme form of mistreatment.

In 2012, according to the NCAVP, transgender people were 3.32 times as likely to experience police violence as compared to other LGBTQ survivors and victims.

The NCAVP offers recommendations for policy makers to turn around this violence by battling the root of the problem: discrimination.

Directive 152 was Philadelphia’s answer to that. Now the city and the trans community can only wait and watch to see if the directive helps combat discrimination.

Bearlesque is a body-positive, gender-inclusive burlesque performance group featuring people of all sexualities. The organization was created in 2014 by Josh Schonewolf and Connor Michalchuk as a one-off show for ‘bears,’ a slang term in [Read More]

The transgender community has seen many changes throughout the years. One of those changes has been the rise in the number of support groups that are available to the community. “There were no support groups,” [Read More]