City of Brotherly Love Softball League (CBLSL) is one of Philadelphia’s largest and oldest LGBTQ sports organizations. The league was created in 1981 by J.J. Hendley as an outlet for LGBTQ individuals who wanted both athletic experience and social networking. Each year CBLSL gives out a J.J. Hendley award, the highest honor a player in the league can receive.

“The league was started for LGBTQ people who were athletic and looking to get involved and meet other LGBTQ people, in a time that was very different,” said Zach Wilson, a team manager in the Men’s Recreational division. “It was harder to meet people, and so the league sort of grew out of that.”

CBLSL is part of the North American Gay Amateur Athletic Alliance (NAGAAA). Games are held at Fairmount Park on Sundays from April through June, but the league is active in other ways throughout the entire year.

“Many of the events that are put on by the league have a charity benefit to them,” Wilson said. “For example, we have our Jingle Bell Bar Crawl and the proceeds go to an LGBT charity; this year it was Home for Hope.”

Many of the teams are sponsored by organizations across the city, many being LGBTQ bars. Some of CBLSL’s sponsors include Tabu Lounge & Sports Bar, UBar, Tavern on Camac and Toasted Walnut (among several others).

“We like to have Bar of the Week for the sponsor bars in the league,” said Christina Deckhut, the Commissioner for the Women’s Recreational division. “This is a great way to promote the bars; it’s a way to thank them for sponsoring our league.”

Before becoming the Women’s Commissioner this year, Deckhut was her team’s manager for five years and has been playing with the league for nine. Her team is now sponsored by Toasted Walnut, a new lesbian-centric bar in the Gayborhood.

“Denise Cohen, the owner, is one of the most generous and easy-going people to work with,” Deckhut said. “My team will be traveling to Austin to play in the World Series this year, and Denise helped us fundraise by letting us host an event at her bar.”

The Amateur Sports Alliance of North America (ASANA) World Series is held in Austin each year and is one of the largest annual women’s sporting events in the world. The tournament will celebrate its tenth year in the summer of 2017. 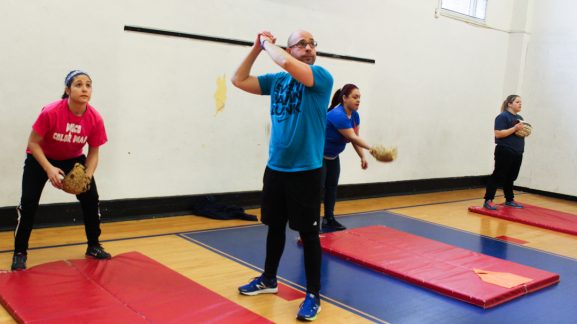 Beyond athletic opportunities like the World Series, players appreciate CBLSL for its sense of community and camaraderie.

“When I joined, I had just come out a year or two before,” said Lisa Benedetti, a player in the Women’s Competitive division. “For me it was one of the first parts of a social community that I had that I was able to relate to more and open up with. I’m one of the younger ones, so it’s been really good asking for advice for a lot of things and having that outlet of people that I know are going to be there.”

Benedetti’s team is called the Sunday’s Hangovers and is sponsored by the Philadelphia Gay News.

This tight-knit bonding is shared among many teams in the league.

“This league is a lot about unity,” said Destiny Acevedo, a player for BucketBuds in the Women’s Recreational division. “I didn’t have anything like this growing up, so to have a league where you can find somebody like yourself, it’s a good place.”

The BucketBuds will also go to the ASANA World Series in Austin. This is the first year that a team from the recreational division will attend the tournament. 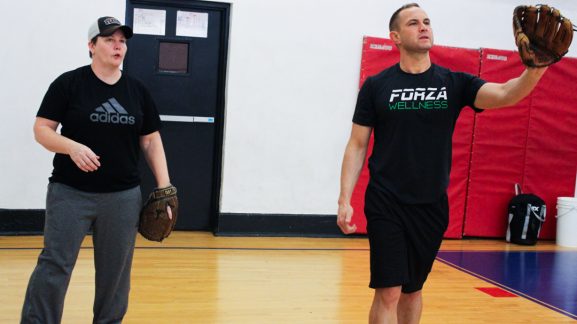 In addition to the strong unity among teams, there are also often close relationships between sponsors and their teams.

“As the manager of the team I’m responsible for working with our sponsor,” Wilson said. “Most teams have a strong relationship with their sponsor. Steve Carlino has been really great to us over the years since the team has been around.”

The league provides both a safe space for its players, and also a connection to the LGBTQ community as a whole. CBLSL works to bring unity through athleticism and community.

“The league is very community-based,” Wilson said. “First and foremost, it’s a place where people feel safe and welcome.”

Though the league is a gathering place for members of the LGBTQ community, straight allies are welcome to participate as well. Inclusivity is part of the mission of the league, and there are several players who do not identify as LGBTQ.

“All people are welcome,” Wilson said. “Both LGBTQ people and their allies, which I think is really important. The league is a way to connect to people in a positive atmosphere. For LGBTQ people, there are the bars, William Way Community Center, support groups but the league itself is very unique.”

“I wouldn’t be who I am today if it wasn’t for this league and for my team,” Deckhut said. “I have met the most amazing and influential people through [CBLSL]. I finally found my home.”

https://vimeo.com/19639286] Bob Dillon may look rusty, but the 68-year-old pitcher said he still has a lot of fight left. He and his teammates work out at the John M. Perzel Community Center every Friday in [continue reading…]