During the last year of her undergraduate career at Tyler School of Art, Kate Speidel imagined her own artist’s space as an idea for a class assignment to compose a grant.

“It was a very nebulous thought, but gaining more and more power in the back of my head as people were talking about becoming art assistants, applying to residencies, applying to grad school, and I knew that none of that was what I wanted to do,” said Speidel. “I didn’t want to be a part of another institution again, and that was the driving force.”

She proposed this idea to create a space for classes and shows to her classmate and friend Sasha Parker, “kind of like Andy Warhol’s factory mixed with more of a school and minus the drugs, and not just about Andy Warhol but multi-people.” 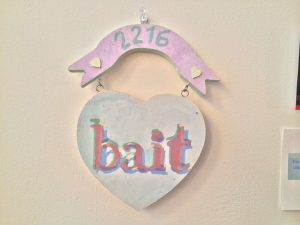 That imagined space is now BAIT, where Speidel lives with Parker, Ben Coover and Elizabeth Loux, who make up the group of artists, including Erin Marmer who recently left the group. The modified Andy Warhol comparison isn’t completely misleading—there are familiar faces who come out to the events, and many have collaborated or have ongoing collaborations with the artists. They created BAIT so a breathable space existed for them to work on their own terms, with no hierarchy building a ladder of commercial successes to climb. The layered-list of events began last September with discussions following a film screening, leading to performances, shows and lectures. Most recently, the group held An Open Meeting, featured in the video below.

“Our events almost started as more structured hangout sections. Everyone would come, but we’d still have readings. It’s funny ’cause we began those structures based on school without realizing it,” said Speidel. “Our catalogues and readings have morphed into the shape of who we really are and what we’re really doing as opposed to copying the structure of what we know and have experienced.”

When inside BAIT, you’re inside a home, so the connection between the art and personal space intersects.

For November’s “First Time,” each member invited an outside artist inside their bedroom for a collaboration about personal space and intimacy. The audience stepped into each bedroom to watch performances and view work, and afterward, stayed inside to lounge, drinking beer and eating pizza.

“I think we take ourselves deadly seriously, but at the same time are laughing at ourselves,” said Speidel.

The call came into Rev. Francis Gwiazda’s office at 12:30 p.m. Thursday informing him that St. Laurentius would remain open. The school was one of three archdiocese schools that appealed the impending closures and won. […]