When Joe Livewell uncovered the “ghost sign” beneath the plaster, a hand-painted advertisement of a boy holding bread, it solidified the fact that Richmond Street was once a place for foot traffic, a place where ads, like the one for Kolb’s Pan-Dandy Bread, were viewed on a street that held and still holds much of Port Richmond’s potential.

Livewell, director of businesses operations for Urban Renewal Builders (headquartered a block away from the development) believes a new cafe and apartments currently under construction, with the help of BMK Homes, at 3118-3120 Richmond Street will help rejuvenate the street as a commercial corridor.

“The first thing you establish on a new commercial corridor is a coffee shop,” said Larry McKnight, founder of Urban Renewal Builders.

Demo work began in the space in September and construction recently started in February. The future coffee shop, which Livewell has named River Wards Cafe, will encompass the bottom floor of the space, while seven apartment units will be housed on the second story of the space.

“The river wards is a term that connects our neighborhoods,” Livewell said. “It doesn’t separate them. The reason why I like the term river wards in general is it’s a unifying term. I’ve always felt connected my entire life with people I knew from Port Richmond, people I knew from Bridesburg. Same mentality, same strength to their pride.” 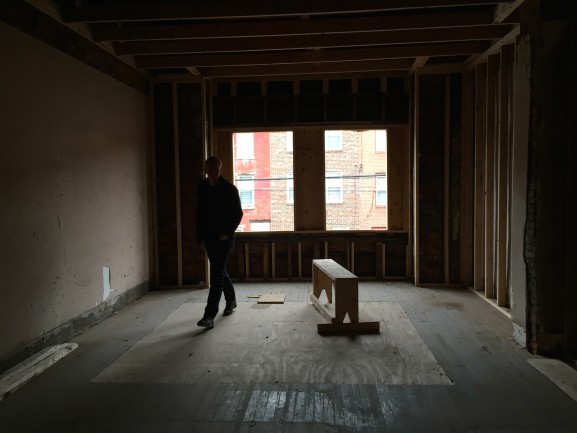 Livewell and McKnight grew up in nearby Fishtown and many developments in the area over the past several years have made the neighborhood increasingly sought-after in Philadelphia. In 2013, Philadelphia magazine dubbed Fishtown one of the “Hottest Philadelphia City Neighborhoods.”

According to Zillow, Fishtown home values have increased 8.6 percent over the past year. Zillow also predicts home values will go up 4.7 percent within the next year.

McKnight claimed that it’s part of a “natural progression” for growth and development to swing to fellow river ward, Port Richmond.

So far, Urban Renewal Builders has purchased four commercial properties along Richmond Street to get the ball rolling. The company already possesses many residential spaces in Port Richmond as well, including six houses on Salmon Street.

The upcoming coffee shop is scheduled to have large windows that will allow the space to open to the sidewalk of Richmond street.

Port Richmond resident Dante Porcelli, 23, said he makes his own coffee at home because one of his roommates is a coffee roaster for La Colombe Torrefaction.

“I think it’s really good for the area,” Porcelli said of the upcoming coffee shop on Richmond Street. “I don’t know if the market is there yet. I’m not sure how many people in Port Richmond are looking for a cafe. But I think that they have the right idea and that they’re anticipating that area to get a little bit more interesting once Richmond Streets gets finished.”

Construction is constant for Port Richmond residents, considering the Pennsylvania Department of Transportation’s 95 Revive plan for I-95 specifically targets Richmond Street for its Girard Avenue Interchange project at section GR1.

Other than the unprecedented uncovering of the two-story mural, Urban Renewal Builders and BMK Homes purposely opened up the concrete slab that connected the lots of 3118 and 3120 Richmond Street.

“They were unified some time 56 years ago,” Livewell said. “Somebody put a roof between the two to unify the buildings. That concrete slab that was once a yard and an alleyway was covered over.” 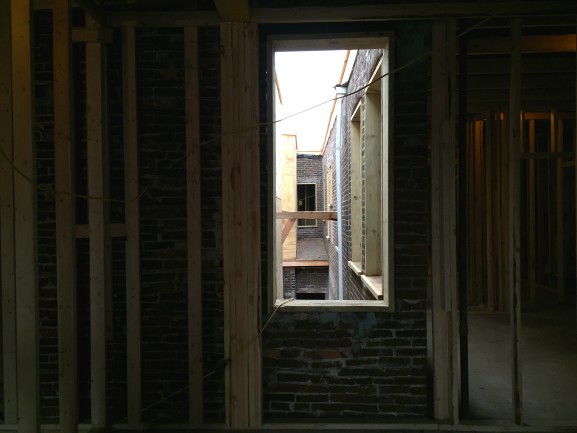 Reopening the space between the buildings has allowed for increased lighting for the apartment units, but Livewell also believes that opening the space to its former structural makeup has also promoted its past.

“I wanted to kind of find a way to show that that building had a history,” Livewell said. “Opening up the light well was a big part of that.”

Livewell said he would love to have River Wards Cafe open by September but that there is no set date.

“It’s not an easy thing to open a small business but I think it’s an admirable thing,” Livewell said. “The end goal is to have Port Richmond be another viable economic center with people walking around.”

Located at 1130 Columbia Ave., is Yoga has become a space for local residents who wish to pursue yoga in a small and friendly learning environment. Chae Yang Bullock, owner and chief teacher, opened the studio [Read More]

Port Richmond is a neighborhood in Philadelphia that contains a deep Polish heritage. The residents are predominantly of Polish origin, while the nationalities of other locals range from German, Irish and Italian. Located between the [Read More]

Port Richmond: A $640,000 Renovation Providing More Than Just A Facelift

For more than 60 years, the Stokley playground has been a neighborhood hub at the corner of East Thompson and Indiana streets in Port Richmond. This fall, the playground is set to undergo a $640,000 [Read More]