Bicycle commuting in Philadelphia more than doubled between 2000 and 2011, and with more bicycles parked in and around the city, theft has become a hot topic – particularly in Graduate Hospital.

Bike activity rates much higher in the area compared to the rest of the city, and consequently thefts are also much higher. The Bicycle Coalition of Philadelphia (BCP) estimates bike theft somewhere between 170 and 760 per square mile in the neighborhood. 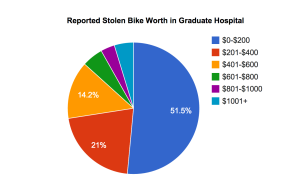 Philadelphia has a serious bike theft problem, said Nicholas Mirra, communications manager for BCP, so much so that police need to focus attention on combatting bike theft.

“Bike theft is a difficult crime to get a handle on and it rarely reaches higher levels of police departments priority list,” Mirra said. “Because of this, bicyclists don’t always report the theft. People feel chances of recovery are low.”
The 17th Police District, which encompasses Graduate Hospital and parts of Gray’s Ferry and Point Breeze, has not returned requests for comment, but Andrew Dalzell, programs coordinator for the  South of South Neighborhood Association, said the organization is now registering residents’ bikes in response to theft rates.According to city data, 180 bikes have been reported stolen in Graduate Hospital since 2010 – an average of one bike every eight days – almost half which were worth more than $200.

Many people complain to BCP when their bikes are stolen, Mirra said, but the organization can only offer sympathies and give advice on preventing future thefts. One of which is proper lock technique.

U-Locks are recommended because they’re easily transportable and difficult to cut through. The lock goes around the frame and through the back wheel (because that’s it’s more expensive to replace) while a cable runs through the front wheel and frame and is secured to the lock. The organization discourages locking bikes to trees because thieves have been known to cut them down to steal bicycles.

Curtis Anthony, owner of Via Bicycle on 9th Street which buys and sells used bikes, said most bikes are stolen because they are improperly locked. Anthony has his employees teach their customers how to properly lock their bikes using a U-lock and cable.

Bicycles can be worth hundreds and sometimes thousands of dollars, and although they frequently appear on websites such as Ebay and Craigslist, Anthony said they’ve been known to appear in used bicycle shops in Philadelphia too. That’s why he only purchases his bikes from vendors where the bikes are registered.

[vimeo 59862679] Fairmount residents voted last month to support of a bicycle lane starting at Broad Street heading west. Now the neighborhood awaits approval from Spring Garden and Francisville. These residents will be given the opportunity [continue reading…]