This summer, the Delaware River Waterfront Corporation unveils the latest component of its master plan to revitalize and rebuild a stretch of the city largely unused in the recent past. Spruce Street Harbor Park had its grand opening to the public on Friday, June 27.

Visitors began arriving at the front gates almost an hour before the pop-up park officially opened and the riverside pathways were promptly full of families and couples exploring the many amenities offered.

Nestled in the hub of Penn’s Landing Marina and adjacent to I-95, Spruce Street Harbor Park is now the city’s second waterfront park close to Center City. Unlike Penn Treaty Park, however, the project is clearly the result of extensive planning and collaboration between the DRWC and a myriad of vendors.

While Penn Treaty offers open swaths of grass and playgrounds to mainly local Fishtown and Northern Liberties residents, Harbor Park was designed as a destination spot for all people. It includes a riverfront restaurant, a variety of games including a bocce court and shuffleboard, hammocks suspended both over the water and in the midst of over 30 trees, seven floating water gardens and a collection of seven misting stations which comprise the “mist garden.”

Jodie Milkman, DRWC’s vice president of programming and communications, described the park as being just one more piece of the puzzle in the DRWC’s efforts to redesign the waterfront as the “sixth square” of Philadelphia.

“This is all part of our mission to create and implement a great civic and public space at every half mile marker of the waterfront,” Milkman said. “What we are doing is about incentivizing development in an area that offers so much to Philadelphians.”

Harbor Park is a temporary seasonal project but seems to hint at what the waterfront could offer if projects such as these garner enough attention to prove successful.

“I would totally come here regularly,” said Zach Panebianco, a visitor to the park. “If this place was open into the fall, up until even November, I really think they would have a regular turnout.”

Certain aspects of the park do seem limited to a summertime season, including the boardwalk that features both concessions and arcade games hosted in old shipping containers that line the marina. With dozens of lily pads dotting the coast, entertainers roaming the grounds on stilts, the musicians enthusiastically playing the bongos and drums and the imported sand crunching beneath visitors’ feet, the park exudes a definitively urban-beach vibe.

While the park has a fun, family atmosphere, it also has some upscale aspects. Harbor Park has its own restaurant and bar, The Blue Anchor. The eatery’s menu was created by Philadelphia-based chef Jose Garces specifically for Harbor Park. Many locally-brewed beers are served at the bar.

The park will also host a weekly crafts fair, dubbed the Art Star Pop-Up Market, and will be curated by Art Star Boutique and Gallery of Northern Liberties. Every Saturday afternoon a rotating group of vendors will set up shop within the park and display work for both sale and collaboration. One of the first vendors to do so was local artist Candy Depew, who exhibited a collection of her silkscreen prints.

While the park does offer new amenities to discover, its design and presentation also places focus on Philadelphia’s past. Repurposed maritime shipping containers not only house vendors and games but also sit across from one another at Columbus Boulevard and Spruce Street, creating a walkway directly into the park. 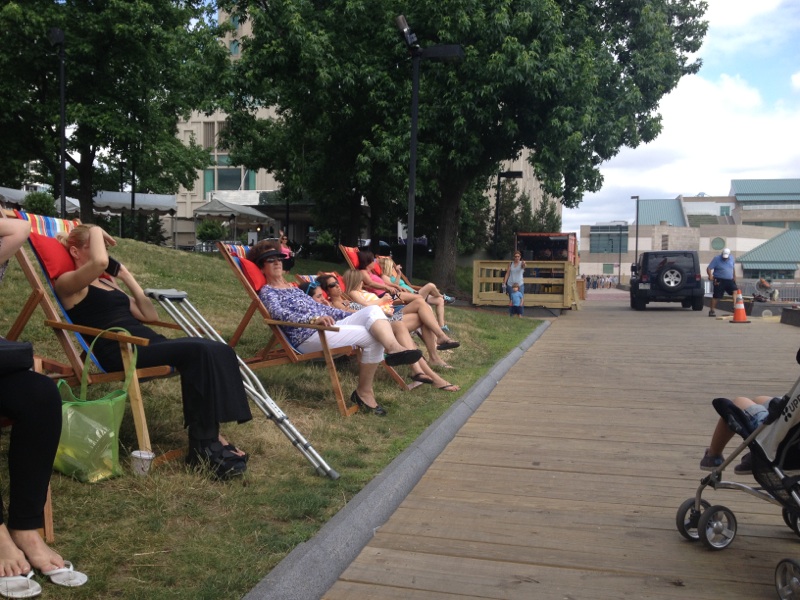 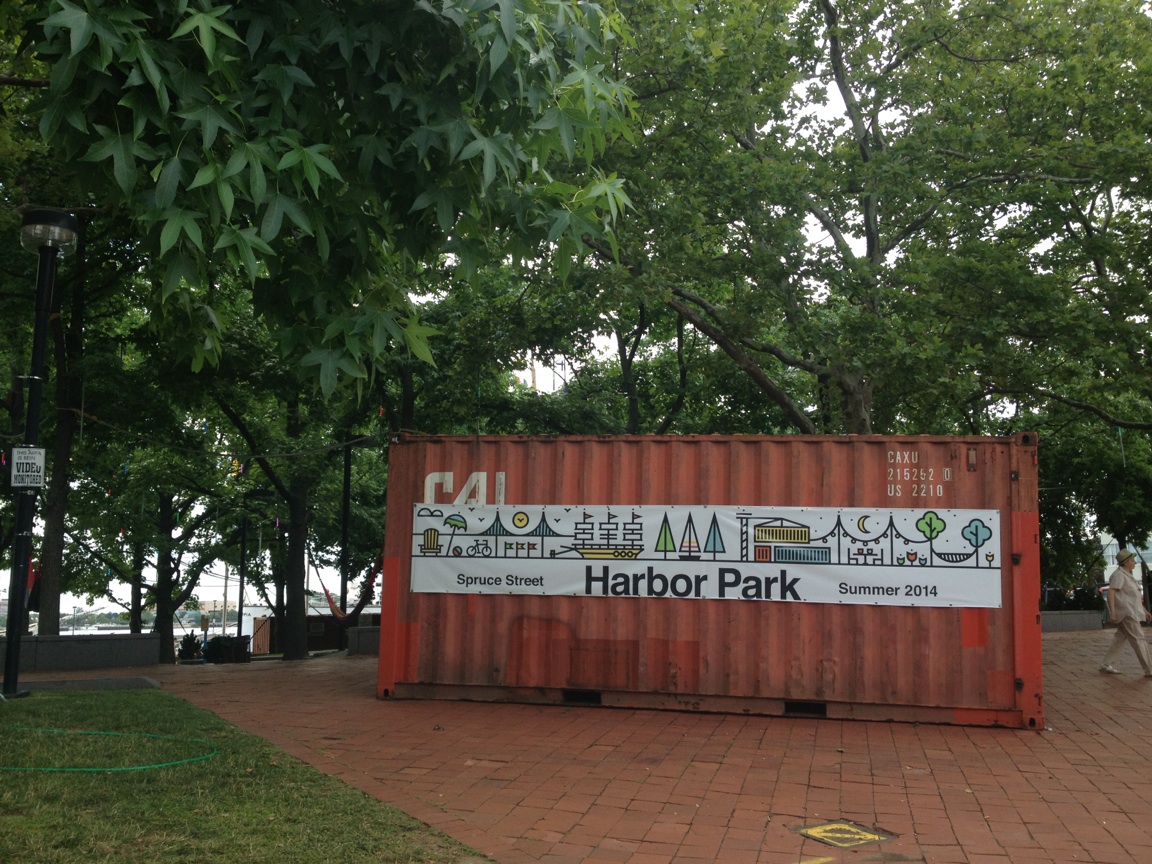 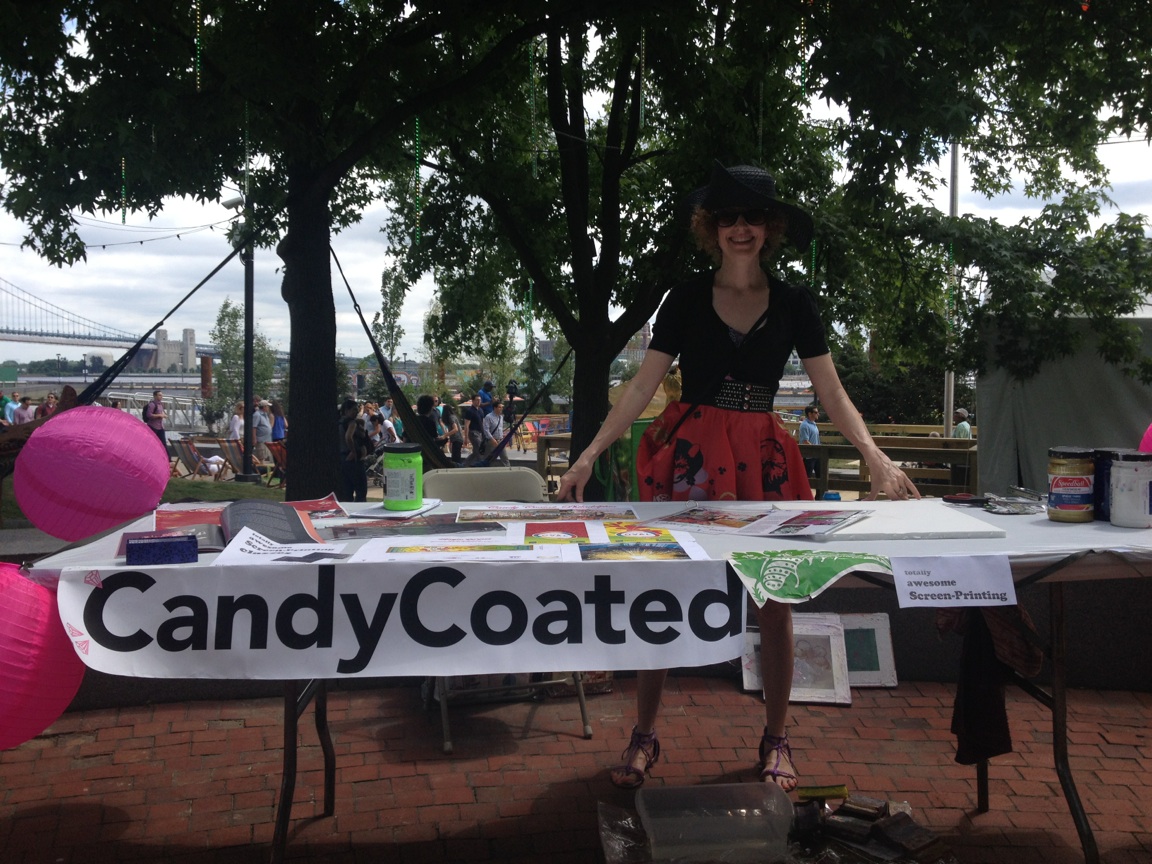 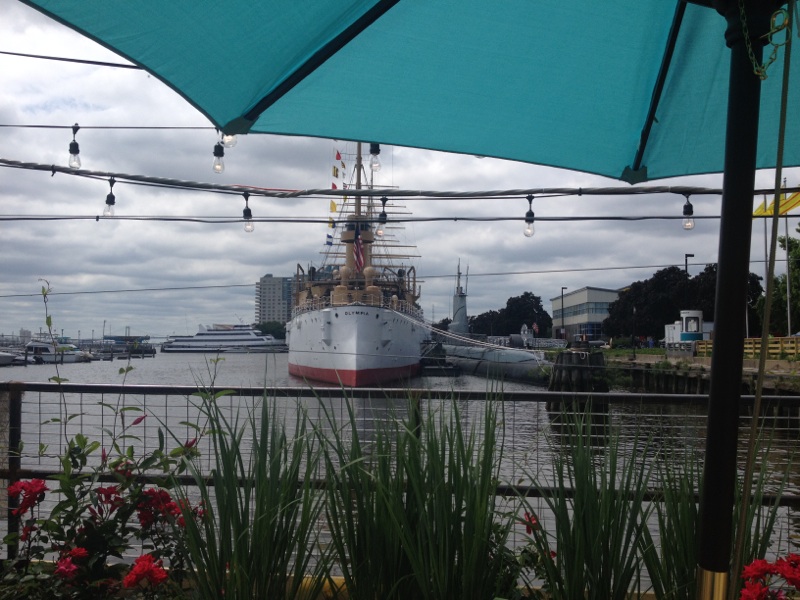 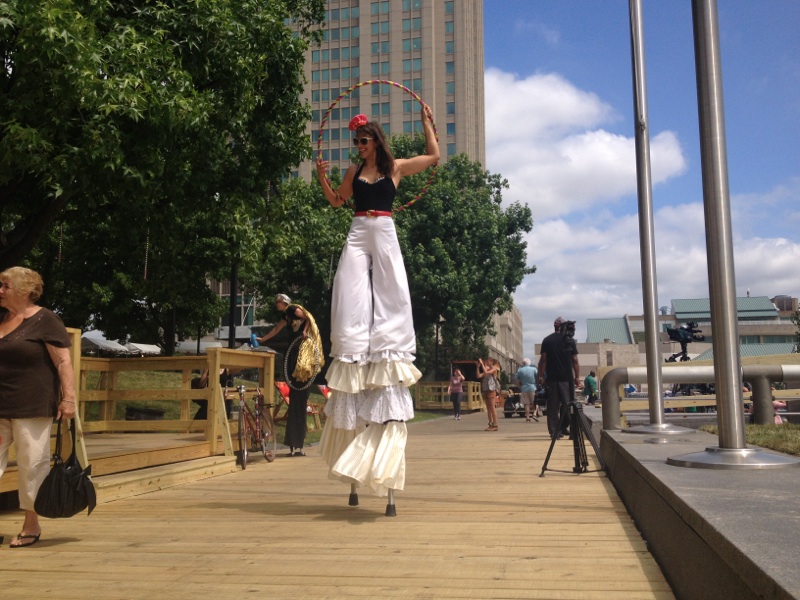 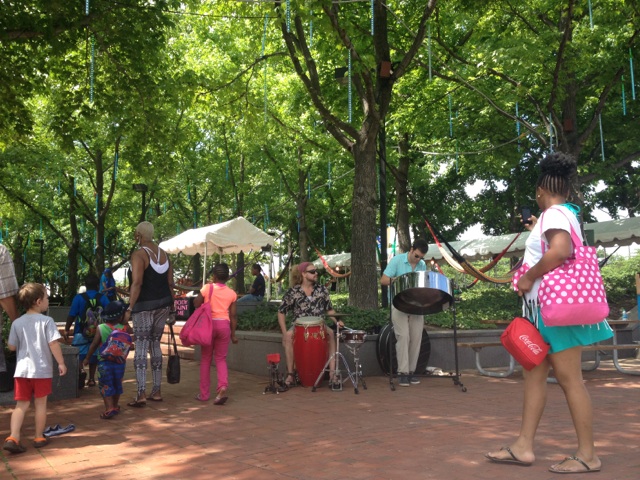 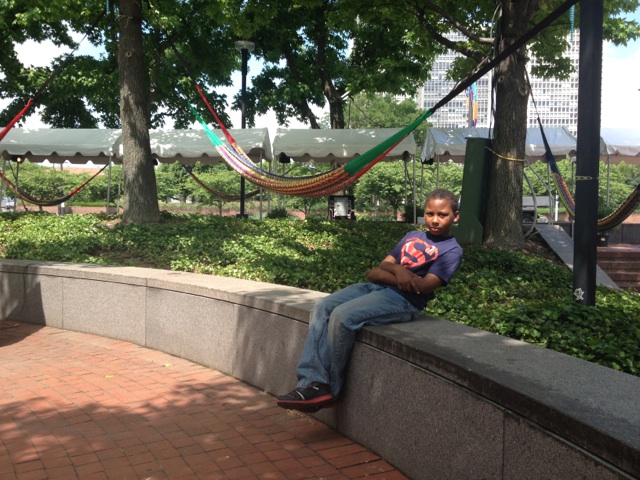 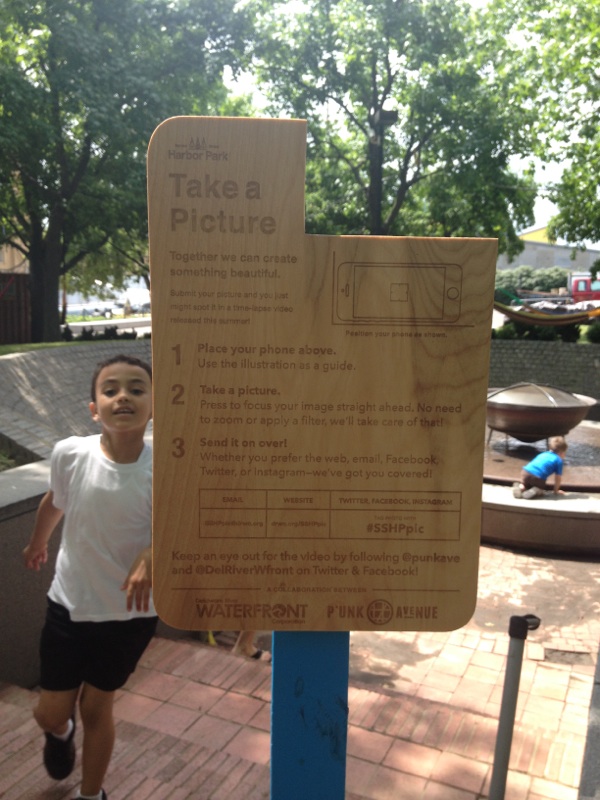 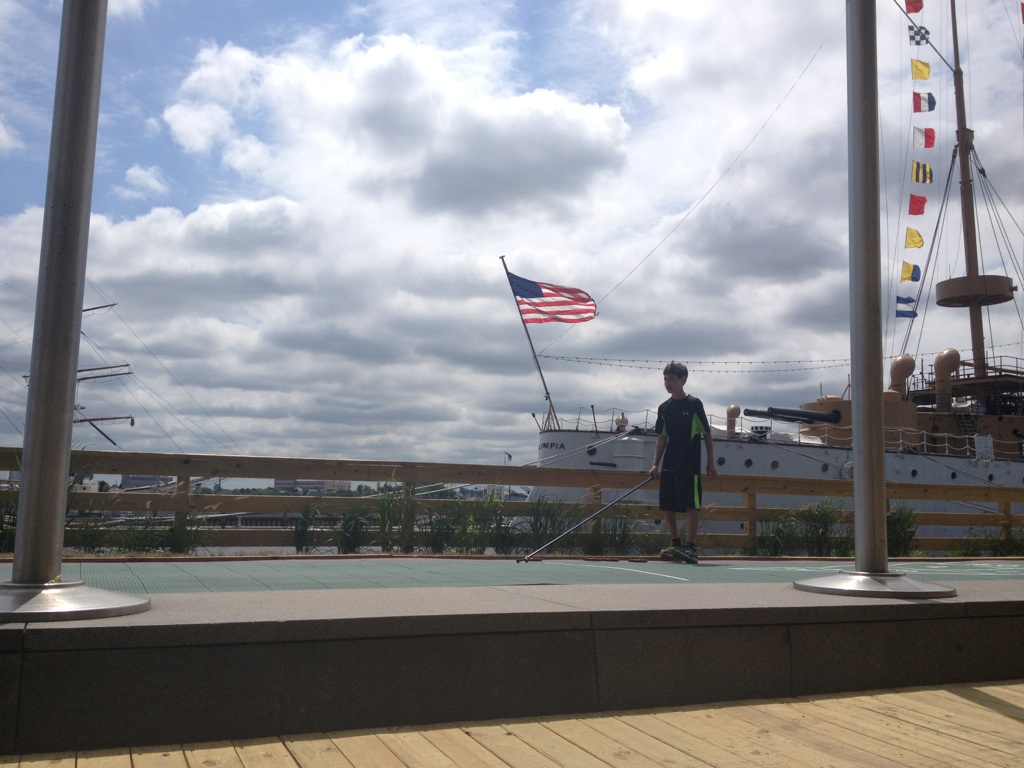 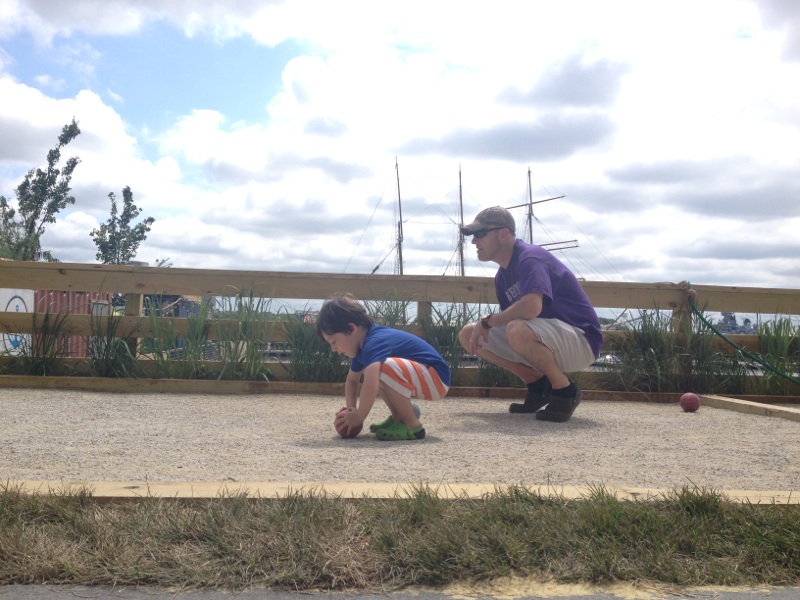 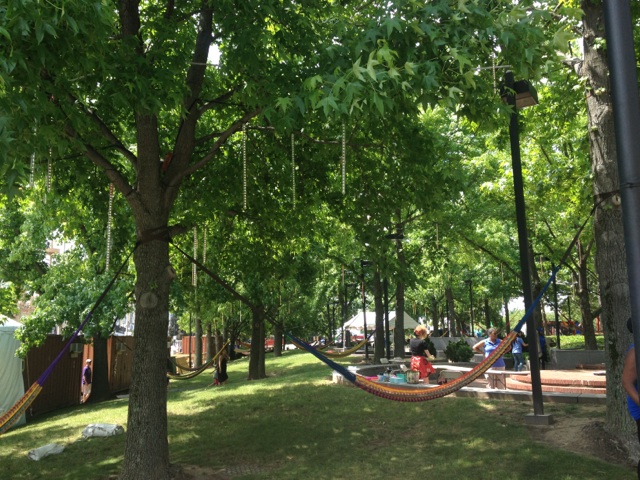 <
►
>
The park used repurposed shipping containers as an homage to the city's industrial heritage.

The misting garden’s stations were built to look like trees, utilizing iron piping with the purpose of evoking a vibe that is reminiscent of the city’s industrial history along the waterfront. “The Quay” has beach and lawn chairs that provide visitors and tourists with a clear view of the one hundred year-old wooden tall-ship Gazela, which will be docked on the park’s outer sea wall for the duration of the summer.

– Text, photos and video by Hayley Condon and Madeline Bates.

Down on Richmond Street, at the intersection of East Clearfield Street, traffic is sparse. An occasional 18-wheeler drives down the road and most of the stores, from the bakery to the bar to the bookstore, [continue reading…]

On the bright sunny day of the 3rd Annual Fishtown Fishing Derby, AJ Thompson, president of the Friends of Penn Treaty Park, ran around the park, handing out fishing poles to kids who didn’t have [continue reading…]