Since its emergence last month, Vanessa Jerolmack’s backyard business has garnered a strong following from surrounding neighbors near 50th Street and Baltimore Avenue in West Philadelphia. Jerolmack, no stranger to the abundance of taco joints located throughout her hometown of Los Angeles, saw an opportunity to bring Mexican cuisine to Cedar Park.

Starting out as a mobile taco stand for various sections of the city, Taco Angeleno‘s current home is a formerly-abandoned lot-converted fenced-in dining area complete with picnic benches, decorative plants and draped Christmas lights. Jerolmack, who used to cook Mexican food for her delighted friends, bought the lot in 2012. She made it her goal to turn her backyard lot into an eatery, one where neighbors could enjoy her Mexican cuisine together as a block community. 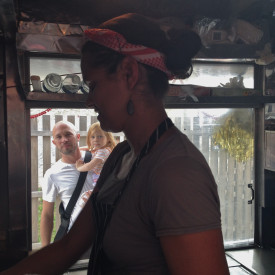 “The idea came because I really wanted to do something great for the neighborhood,” said Jerolmack. “I thought [it would be] neat to bring a business to the block, something that people really wanted.”

She took food suggestions from neighbors. She credits Philadelphia businesses such as Little Baby’s Ice Cream and other neighboring ones, like Vix Emporium, with supporting her cause.

“Everyone’s helped me along the way,” Jerolmack stated. “All of the [shops along] Baltimore Avenue have just helped with business advice and showing me how to do things [such as how] to promote a small business.”

The Enterprise Center in West Philadelphia allows her to use the facility as a commercial kitchen where she cooks all of her food. While there, she meets other small-time owners. Everyone wants to help one another. 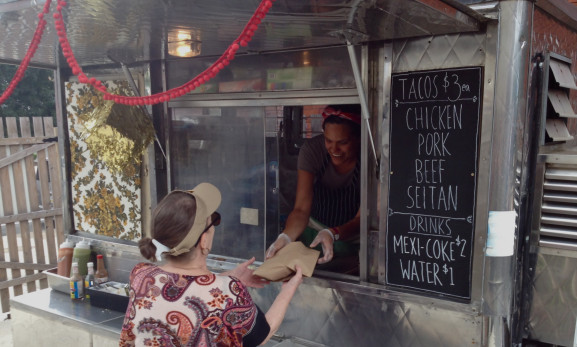 For Jerolmack, there are friends and neighbors involved in every step of the way. While it’s typical for stores with close proximity to compete fiercely amongst one another, the long strip of shops along Baltimore Avenue seem to be working together towards something bigger. The goal to bulk up Baltimore Avenue business is clear within community meetings, said Jerolmack.

-Text and images by Kevin Deegan and Mike Talvacchia.

Eduardo Halfon read a passage from his book, “The Polish Boxer,” to a small audience this week at the Kelly Writers House, on the University of Pennsylvania’s campus. Halfon, wrote this novel in Spanish and [continue reading…]

What do you get when you take a passion for beer, a knack for business and a hardworking staff? Dock Street Brewing Company, of course. Located at 50th Street and Baltimore Avenue, the pub holds its own in [continue reading…]