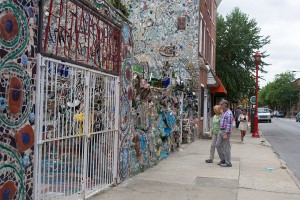 Philadelphia’s Magic Gardens (at right), located at 1020 South St, has stood as a visual staple in the community for years. Education and Outreach Manager Olivia Edlund (above) has been working off and on at the PMG since 2009 when she started as a garden guide. Through her work with PMG, Edlund has been able to experience first hand the impact that art has on a community, its members and vice versa.

For someone who has never heard of Philadelphia’s Magic Gardens, what do they need to know about the space?

Philadelphia’s Magic Gardens is a visionary art environment that was all created by Isaiah Zagar over 14 years and it is sort of his masterpiece. We are a non-profit organization and community art center that is inspiring creativity and community engagement. We are also preserving the works of Isaiah Zagar and teaching people about them. PMG is his largest public installation but he has done over 200 public murals around the city. Most of them are in South Philadelphia, but he has done work across the country and in other countries. 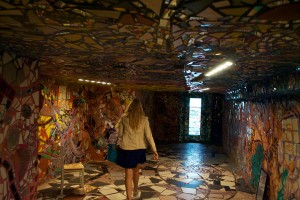 So you’ve worked for PMG for about three years off and on since 2009. How is your new role different from being a garden guide?

I manage all of our education programs, which includes our guided tours and our interpretive experiences throughout the site. I’m also managing our Tile & Grout Program, which is our mosaic mural outreach program. We have a lot of other smaller programs like PECO Family Jams, which is our family program that’s held on the second Sunday of every month. We’re also at different festivals in the city.

What types of outreach programs does PMG offer?

One of the main outreach programs is Tile & Grout, which is a mosaic mural outreach program that we do with organizations or schools. We’ll go to their site and meet several times over the course of a few months and show them the PMG and introduce them to Isaiah. The rest of it is done at their site. We work with them to generate a design concept for the mural, create tiles with them and then we’ll do the installation with them. So they’re involved from start to finish in creating the mural.

What can you tell us about 2002, when the community stepped in to save the space from being destroyed and turned it into a nonprofit in 2004?

Isaiah had been working there for about eight years, on and off, at this space which was next to his property. The property he was working on, now PMG, was just an abandoned lot. The people that owned it didn’t live in Philly, so they didn’t know what he was doing. They had an agent in Philly that knew, so Isaiah sort of had permission from that person. He wasn’t intending on creating a museum, he was just doing what he did which was mosaic things and create artwork. The neighborhood had become nicer so the owners wanted to sell the property to make money. They found out what Isaiah was doing and they were not happy. Isaiah didn’t have the money to purchase the property so that was where the struggle happened. People really wanted it to stay there and not be destroyed so the community stepped in and donated time and money. There were lawyers who got involved and worked for free to help Isaiah. That went on for about two years. That’s how the non-profit formed, kind of out of necessity to buy the space. 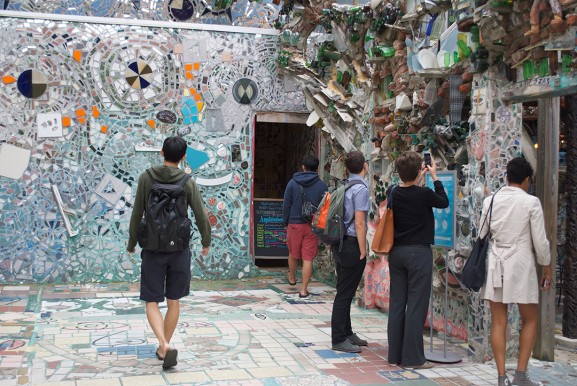 How has PMG affected the surrounding community?

Well, we see ourselves as a community art center and we’re very involved with the community. I think that is something that really came straight from Isaiah. He has lived on South Street for more than 40 years. He’s really been the cause of a lot of change – positive change in the neighborhood at various different times over the years. That’s the kind of spirit we’re trying to continue. It’s not like a lot of other museums where there’s guards standing around everywhere. We want people to feel comfortable in PMG, we want them to feel like they’re part of that.

Lastly, what do you feel is missing from the artistic community in Philadelphia or in the South Street area?

I don’t feel like something’s missing, but I do feel like the Philadelphia arts community and even here on South Street is something that’s really been growing. I think there are a lot of positive changes happening. I know the Pearl Arts building, which has been empty for several years, is getting ready to be converted, I believe, into an artist studio space. It’s been sort of a slow process, but it’s going to be a really positive change for South Street. There was a program called Arts on South that we were running for a while but it ended up that we couldn’t continue doing it. We were working with some other organizations to allow artists to submit proposals to use retail space on South Street that was vacant. For a short period of time, they could have a gallery in these places for free. It was a really great way to do something positive on the street.

– Text and images by Matt Jobs and Christopher Wirth.

Olney: A Community Drawn Together in Ink

Alston Henry prodded his partner with jokes as he drew on his shoulder with a needle. After he finished, he slapped a cloth on the fresh patch of ink, stamped to the shoulder of fellow tattoo [continue reading…]

Little Berlin, a Kensington collective art space and gallery, is currently in the midst of its June exhibit, “Gone Shadowing.” The focus, according to curator Alex Walcroft, of the exhibit is on performance art, photography, [continue reading…]

On the 1900 block of South Broad Street, outside Pizzeria Pesto restaurant, lies a messy pile of trash splayed on the sidewalk. Cardboard boxes, empty plastic bottles, a child’s potty and other items have been on [continue reading…]