Owning a bakery was never on Boyd Rhode’s mind as a teenager, although she grew up in the bakery business with her father and grandfather. She attended Temple University and studied early childhood education, planning to get away from the business. However, after graduation in 1982, she went to her father and asked to open up her own business – a restaurant.

“I always knew in my heart that I always wanted my own business,” said Boyd Rhode.

However, she was convinced to forgo the restaurant business and go into the family business of bakeries.

In the 1950s, Boyd Rhode’s father and grandfather acquired the Bredenbeck’s name and all of the recipes.

After 125 years, the Bredenbeck’s name is still going strong in Philadelphia, 31 of them being under Boyd Rhode’s leadership.

“I am proud to say I have watched a lot of people come in and out the door, that have crossed my path,” said Boyd Rhode. 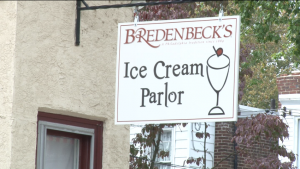 On top of being a bakery, Bredenbeck’s also doubles as an ice cream parlor.

“It works really nicely, it just is nice when it is 90 degrees and you don’t feel like a piece of cake but an ice cream cone,” said Boyd Rhode. “A lot of the toppings on our ice cream are what we use in our cookies and pastries, so it just goes hand-in-hand.”

But the ice cream business is not as easy as a cake business. 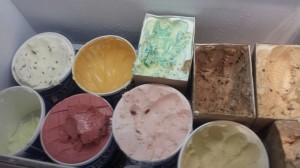 “It is very rough, it is very seasonal,” said Boyd Rhode. “There are four months out of the year where it is very cold outside, so it is hard to get people to want ice cream.”

The answer to surviving more than 30 years in the bakery business in the same town is all about knowing when to change.

“The fact that you could be an excellent baker, but if you are not a good businessperson, and you don’t wear a lot of hats and change with the times, you just won’t survive,” said Boyd Rhode.

Tucked in the shadow of the hustle and bustle of Chestnut Hill, it is business as usual at United Cerebral Palsy of Philadelphia and Vicinity. The large facility located on Mermaid Lane offers various programs [continue reading…]

The Central High Robolancers in Olney should be designing a robot for a different task than usual—one that gives out a good pat on the back. The team of robot-building students placed in the quarterfinals [continue reading…]