Artistic creation can be visually appealing to anyone. Street art is a way for people to share their work with a broad audience without the awkwardness of attending a cramped gallery showing. It is right in front of them whether they like it or not. Some street art is commissioned, other street art is illegal and is tantamount to vandalism.

Tagging, as it is most commonly referred to, is a way of claiming territory on the walls of the city. Sometimes the tags are ineligible to the untrained eye, but within the community of taggers or writers it’s an artistic signature.

Graffiti removal is no easy task. When there is a complaint about graffiti, Community Life Improvement Programs sends out a graffiti removal team led by Ed Guzak.

CLIP uses a mobile app to track graffiti. Citizens can choose to report graffiti, which notifies CLIP that at an area needs cleaning or graffiti removal. Concerned citizens can also call the city’s 311 hotline.

“We get complaints off of 311 and the girl at the office will download the complaint and give it to me,” Guzak said. “I’ll send them out to the crews in that area.”

The process of graffiti removal requires a paint color that matches the building, and the graffiti is simply painted over. The team takes a before-and-after photo to ensure that the job is done, and to show how effective their work was.

“Sometimes we have to paint the whole wall depending how large the graffiti is. We’ll get as close as we can to match the colors,” Guzak said.

If the team cannot match the color of the building, the owner is consulted to find out the exact color.

The problem is, after the graffiti is removed, writers will eventually tag it again. It creates a vicious cycle for Guzak and his team, but it always keeps them busy.

Graffiti removal is a free service to the citizens of Philadelphia. According to the city’s website, graffiti has been removed from more than 1 million buildings and street fixtures in the last 10 years.

CLIP isn’t the only organization in Philadelphia to take a stance against graffiti. Philadelphia’s Anti-Graffiti Network was created in 1984, and it was a way to stop the spread of graffiti across the city. PAGN was founded by former Mayor of Philadelphia, Wilson Goode. Through PAGN, the Mural Arts Program was born. 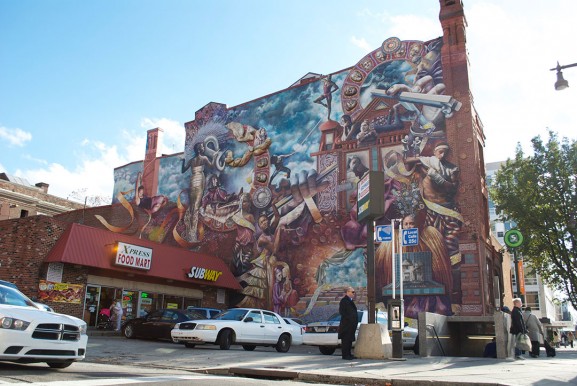 The Mural Arts Program, led by Jane Golden, was formed in 1986, geared towards creating public art. It started out getting taggers to do something more productive with their artistic talents, and lending those talents towards murals. The program also enlists young non-graffiti artists who are simply trying to have their work shared.

One difference between murals and graffiti is that murals are a collaborative effort while graffiti is typically done by one person in the night, as to not be seen and apprehended.

Golden has been battling graffiti for a long time. Her work with MAP has helped turned neighborhoods into a more conversational ones. The murals are discussed with the community members before they are put up for all to see. The work is commissioned and approved of, but not all art that pops up on walls is.

Golden’s stance on graffiti is that it is illegal. She doesn’t often see the value of it, but can understand that there is a talent behind it.

“I think that if you are working on private property and you don’t have permission, while the work might be interesting, it’s problematic and risky, “Golden said. “On the other hand, I have to say there’s something sort of thrilling about a work of art appearing,”

Not all graffiti writers are keen on collaborating with MAP, and some consider it to be selling out. There is a respect for the art, and writers won’t tag a mural. Some graffiti writers appreciate what MAP does, but others aren’t to fond of it.

“Myself personally, I think Mural Arts plays its part,” graffiti writer Chris Nise said. “It’s G-rated public art; family and community approved, guaranteed to not upset grandmom or the kids. Towards that goal, they basically produce uninteresting but palatable murals to the city.  It’s better than a blank wall usually, and it’s really not a threat to good graffiti, so it doesn’t bother me personally,”

Philadelphia is an artistic battlefield. Down many streets there is some piece of art that is visible, whether it is legal or not. Graffiti removal teams try their best to keep up with their workload, but given the rate of graffiti, the job is never finished.

https://vimeo.com/63697359] Incidents involving guns have prompted citizens in the Allegheny, Nicetown and Tioga area to take a proactive stand against violence. Groups like Men United For A Better Philadelphia and programs like Cradle 2 Grave were [continue reading…]

https://vimeo.com/31147809] For the past four years, Karen Herring has spent the majority of her nights on the streets of Philadelphia. When there’s inclement weather, she will shift her transitory bed to the Suburban Station subway [continue reading…]