The Philly Homebrew Outlet (above), home to the Philadelphia Homebrew Club, serves as a depot for brewing connoisseurs. People from all walks of life often visit the outlet for beer-making supplies and advice.

“We get people that are scrapping through college – just scraping to get by and spending whatever dime they can – and then we get, like, lawyers and doctors that have all the money that they want just wanting to come and do a hobby,” said outlet co-owner Nick Less (below). “And the cool thing is we do club-night meetings here every third Friday of the month, and all these people come together and, you know, they all have a good time.” 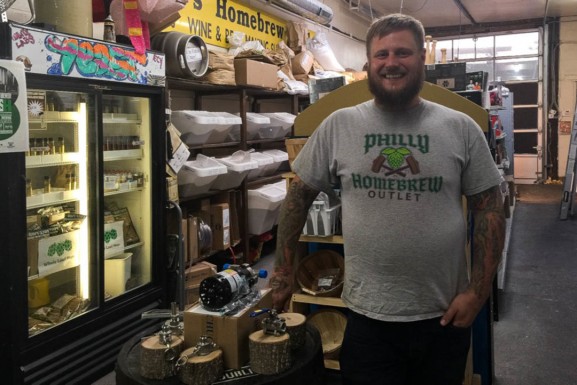 The outlet does not only attract customers interested in making and drinking beer and wine. The store also offers a variety of equipment such as kits to make cider, cheese and yogurt. It’s for anyone interested in brewing almost anything at home.

“I brew soda and there’s only like two homebrew stores in the city, and I like these guys more,” said Zach Detine, a new customer at the Philly Homebrew Outlet. “They’re more affordable, they’re more helpful and they’re not, like, snobby about it.”

Three years ago, Less and co-owner Jimmy McMillan took over the business from previous owner Barry Mulherin when he chose to retire. Mulherin started the outlet in South Philadelphia almost 15 years ago. Less and McMillan moved to their current store in Olde Kensington about three years ago — a space around three times the size of the original outlet. Last year, they changed the name from Barry’s Homebrew Outlet to Philly Homebrew Outlet. 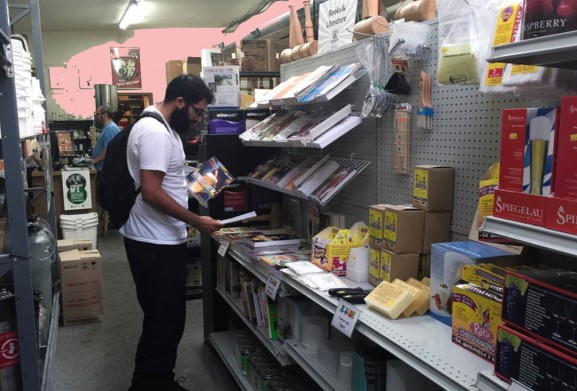 “We are in discussions about opening up a couple of places, joining forces and, kind of, opening up and spreading out,” Less said about expanding and opening other branches of the outlet.

But for now, Philadelphia locals interested in taking up homebrewing or cheese-making as a hobby and don’t know where to begin can visit the Philly Homebrew Outlet, located at the corner of North American and West Jefferson streets.

Local breweries provided an Oktoberfest atmosphere at Mugshots coffee shop located at 28th and Girard streets. The event was dubbed “Brewfest” as members of the community filed in and sampled the coffee flavored beers that [continue reading…]

Al-Aqsa Islamic Academy is a private school for Muslims that was established in 1996 in Olde Kensington. Currently, the principal of the school is Abdur Rahman Crumpton, a resident of the North Philadelphia area for [continue reading…]

Inside the Lutheran Settlement House, at 1340 Frankford Ave., is an atmosphere of constant activity where people are always smiling. From bingo to GED preparation, the century-old building houses enough social services to satisfy the [continue reading…]