During a sunny afternoon at the White House on June 30, President Barack Obama stood at the podium in the Rose Garden and gave a descriptive argument in front of the media about his immigration bill, blaming the Republican Party from the U.S. House of Representatives for the lack of support.

Months later, when it appeared the president would delay his goal to pass the immigration bill until the midterm elections on November, grassroots organizers began to take action in their own cities against the stagnant efforts from the Obama administration.

New Sanctuary Movement, a nonprofit organization located near Kensington Avenue in North Philadelphia, had orchestrated numerous attempts in the past to prevent unnecessary deportations from U.S. Immigration and Customs Enforcement.

In March 2014, Mayor Michael Nutter signed a policy that severed the connection between local Philadelphia Police and ICE. The legislation limited the detainment and transfer of undocumented immigrants between both enforcement agencies. The signed document also stopped ICE from accessing the Preliminary Arraignment Response System, a real-time arrest database that local police use to catalog data from every offender. The information was used as a reference to detain and deport undocumented immigrants.

Some people in the community began to lose faith after Obama postponed the immigration bill.

“We hoped the president would act to help the 12 million immigrants in this country,” said Aldo Siahaan, a pastor from the Philadelphia Praise Center in South Philly. “President Obama is not keeping his promise.”

New Sanctuary Movement held a press conference at the same location on Sept. 24 to advocate their defiance to U.S. immigration laws by providing sanctuary to undocumented immigrants in need of temporary shelter. 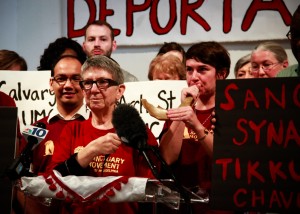 “Sanctuary is our response to an unjust system,” said Linda Holtzman, a rabbi at Tikkun Olam Chavurah. “As we begin the Jewish New Year, we take stock and determine how we can build greater justice in our lives and in the world.”

Gerardo Flores, a longtime member of New Sanctuary, believed that his organization will succeed in the long run.

“We support sanctuary because as a faith community, we have the obligation to end deportations,” he said. “We must honor values of brotherhood in Philadelphia and we act with the strength of our faith.“

While Obama waits until November to deal with immigration reform policies, advocates will continue to show strength and support to their communities.

Jesse Gardner is the key holder to the art gallery, Unsung Heroes . Here, at 2024 E. Arizona St., double life-sized painted portraits of firefighters hang on the walls. But on the first Friday of each [continue reading…]