Filth and trash have become an increasing concern as the Fishtown population has grown in recent years.

The answer to this issue is the Beautification Committee, a sector of the Fishtown Neighbors Association (FNA), whose sole determination is to keep the neighborhood clean while bringing the community together.

“We try to get as many people out here as possible,” said Kristie Landry, Beautification Committee Chair. “It’s always a matter of spreading the word and trying new things to get more people involved.” 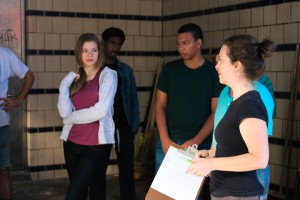 More community involvement was the exact purpose behind the most recent cleanup on Sept. 27, which was held at the intersection of three different neighborhoods at Front and Girard.

“It’s a really dirty intersection and it’s the borderline of Fishtown, Northern Liberties and Kensington, so it gets pretty dirty and no one really knows how to tackle that,” said Fishtown resident, Matt Kilcline.

The problem that becomes of this is the fact that there are a lack of trashcans in the area, particularly near public transportation.

“A lot of people wait for the trolley and there is no trashcan there so they make due and put their trash in the barricade,” Kilcline said. “You can see, we just shovel the trash out of there.”

In an initiative to reduce litter and bring more trashcans to the neighborhood, the committee has developed the Feed the Fish campaign, where giant fish heads are placed on the tops of trash bins. 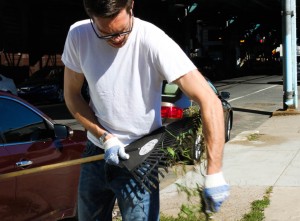 “It’s a sort of fun theory,” Landry said. “If it’s fun, people will do it. So what’s more fun, to throw something on the street or to put it in a big fish mouth?”

Local residents and artists have been chosen to create each fiberglass fish head, where designs range anywhere from the look of an actual fish to a pattern of the Girard trolleys.

“The artists had to sketch several views, an aerial view and different sides to create an entire mock-up,” said Audrey Morrison, FNA Board Member. “We went through a whole review process of approving people’s designs.”

Feed the Fish has been in the works for more than a year now. The first set of 20 fish heads will be spread throughout the neighborhood and will be sponsored by local businesses.

“We are hoping to have a little unveiling party in either October or November so the whole neighborhood can come out and see the designs before they get placed throughout the neighborhood,” Morrison said.

Beautification hopes that this project will expand, as it envelops the mission of keeping the neighborhood clean and beautiful.

Nobody said Fishtown was just for fish. Palmer Doggie Depot, located at approximately 37 E. Palmer St., is a park for residents of Fishtown and other nearby communities to let their dogs run, play and [continue reading…]

Fishtown: 5 People You Should Know

What do two fashionable shop owners, a church thrift store founder, a police sergeant and an art gallery owner have in common? They represent the myriad of identities found in one of Philadelphia’s most rapidly [continue reading…]

Boxing in today’s Philadelphia is not what it once was. On Dec. 10, 1968, Joe Frazier defended his world heavyweight title against Oscar Bonavena inside the city’s Spectrum. The 3-1 favorite, Frazier, won by unanimous [continue reading…]