Joshua Grace has served as pastor at Circle of Hope Church since 2003. Grace leads efforts to unite his community through its thrift store, Circle Thrift, and events hosted by the church. He works with community organizations to mobilize resources and bring people together in a God-centered environment. Circle of Hope is associated with the Brethren in Christ and is one of its few urban congregations.

What led you to Circle of Hope?

I’d been in contact with Circle of Hope for 20 years. Six years later, I was leading in various capacities. Whether it was leading in cells or leading in music. We had this idea to have an apprentice pastor process which would raise up a leader from within the group rather than hire pastors through a pastoral search from outside the community. This was kind of doing it in an old school way but here I am.

After about a year of that process, I had an idea that we were going to try and a lot of that had to do with buying that building at 2007 Frankford for $50,000. The idea was to start a nonprofit thrift store we kind of combined that with the church. People we’re a little bit like, “Really?” Because Kenzo [Kensington] and Fishtown were different then – about 14 years ago. 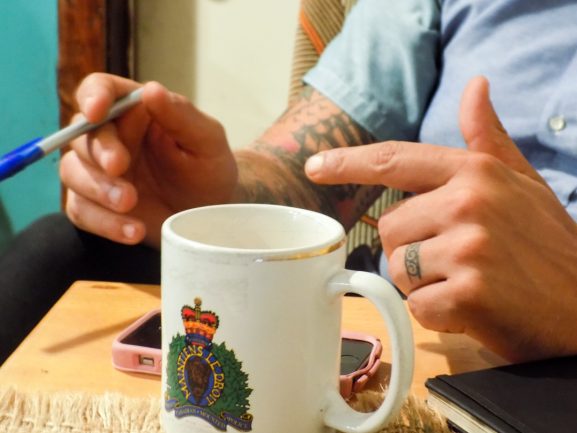 What is the mission of Circle of Hope?

We’re making space for people to come alive on the inside. To be able to share share and express their abilities and passions in a community where God is at the center. Community is the key in that we’re inclusive and have new voices come in and continuously shape it.

What events does the church host?

Last weekend, we had a free baby goods exchange. I think there’s gonna be 16 of those this year. They used to be quarterly when we started. It started out with some extra stuff from the thrift store that were donated or we can’t sell. It’s especially for people who are new to the United States.

If there’s a crisis situation and they’re refugees and seeking status and they’re having a baby at the hospital, they can’t bring the baby home unless they have a carseat. But a lot of people don’t have access to that carseat. A lot of people have too much kids stuff and some people just exchange. About 150 families came together last weekend just to swap baby stuff, you know, find the stuff you need and get rid of stuff you don’t.

Then, coming up the day after Thanksgiving, we’re doing the second, what we call, “Buy Nothing Day Portraits.” People come and get professionally done family portraits they could use for Christmas cards or something but it’s free. The magazine Ad Busters made Buy Nothing Day popular as an alternative to Black Friday where people just buy, buy, buy. We try to make alternative spaces so people don’t have to fall into the mess of Black Friday. 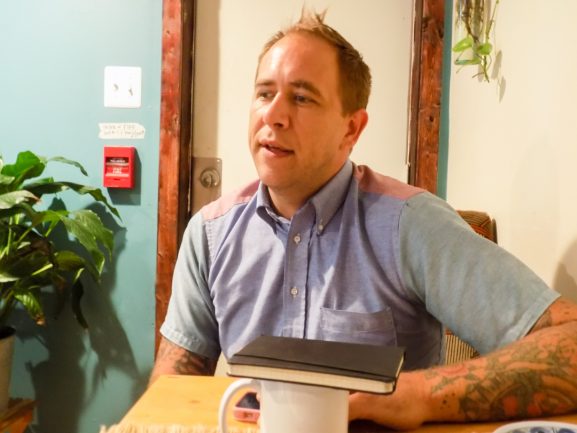 What organizations use the church?

There are two different AA meetings, which is typical for a lot of churches, East Kensington Neighbors and then we’ve been really involved in the Kensington Community Food Co-op, so they still have a bunch of stuff stored there and have multiple meetings every month until their new building on Lehigh gets cracking.

Fair Districts PA, it’s a non-partisan group that is trying to organize to end gerrymandering in Pennsylvania uses us. And then the church is rented out for things. There’s a band that practices there. We have various events there. Spiritual conversations and political conversations take place there. We just had a thing with Solarize Philly, which was an initiative by the mayor to try to put solar panels on 500 homes.

So, we’re experimenting with whether or not our church could contribute 10 percent, so we’re trying to find 50 people in the church to get solar panels.

What’s it like for you personally to make an impact in the community?

On good days, it’s super energizing because I can see people making small steps of faith. That could be a cognitive experience or a spiritual experience. Whether they’re believing that they can do something that they didn’t think they could do or seeing alternatives to capitalism. Just a different take at the economy, organizing people for pre- and post-currency, bartering and that kind of stuff going on.

And when people get together and want to be creative and care about somebody who’s not part of their group, I like that a lot.

– Text and images by Austin Albright and Morgan O’Donnell.

What happens when community outreach and real estate development culminate into an artistic outlet for Philadelphians? The New Kensington Community Development Corporation, one of the many community non-profit organizations that help serve the Fishtown/Kensington [continue reading…]

When Elizabeth VanUmesseren recollected her views about a vacant lot on the corner of Master and Lawrence Streets many years ago, she said plans for cultivating the lot into a community garden didn’t look promising. [continue reading…]