These are the words used by Philadelphia Athletics left fielder Greg “Southwark” Stoloski to describe the game of vintage baseball.

Vintage baseball is simply a re-creation of the sport as it was played in the mid- to late-19th century. Teams typically play a doubleheader against one another. The first game is played by a certain year’s set of rules – say, 1865 – and the second game is played by another year’s set of rules – 1873, for example. The object is to give fans an idea of how the rules differed over such a short period of time.

“When baseball was sort of developing, the rules were changing almost annually,” Stoloski said.

When he isn’t roaming the outfields of rural farmland and parks around the city, Stoloski is a history teacher at Pennsbury High School in Levittown, Pa. He knows it’s odd to double as a vintage baseball player but his fellow teammates also lead ordinary lives outside of this unusual sport.

“For most of us it’s more an expense than anything else,” Stoloski said. “We have to pay for ourselves to travel, we have to pay for our uniforms which can range from $100 to $300. We pay for our equipment. Everybody pays dues to the team annually and that’s pretty standard for all the teams we play against.”

Among the team from Philadelphia is a welder, a mortgage broker, a firefighter, a local city government worker and a real estate agent, just to name a few. These men from all walks of life trade in their contemporary clothes for wool uniforms every week from April to October. 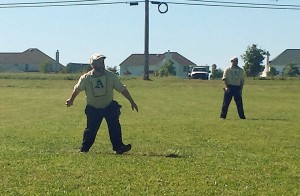 Teams began to replicate the old ball game in 1980 in Bethpage, New York. And while it is focused largely in the northeastern United States, today it is played as far west as Denver and Seattle.

“Baseball really got professionalized the end of the nineteenth century,” Stoloski said. “Prior to that, it was a game that really evolved from a lot of different European and American games. We’re trying to recreate baseball in its purest form.”

When playing by 1860s rules – as is the case most of the time – players cannot overrun any of the bases, the pitcher must deliver the ball underhanded, and balls may be caught after one bounce for an out rather than being caught only on the fly.

However, one of the biggest adjustments players must make is playing without a glove. It wasn’t until the mid-1890s when players began to wear gloves with regularity.

Stoloski said that baseball and softball leagues today have lost their fun factor. That’s where he believes vintage baseball offers something different and exciting for members of all ages. 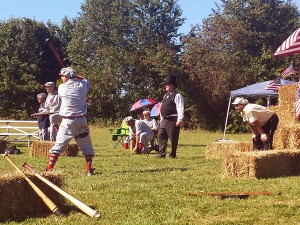 “The youngest guy on our team is about 18. The oldest guy’s probably 70,” Stoloski said. “These guys can all participate. They can all play. We are very competitive and the league is very competitive, so we have a lot of fun while we’re out there.”

“We just kind of tell people to show up,” Stoloski said. “If people are interested, we want to get them involved. We’ll say, ‘Come out to a game, come out to a practice, play with us, we’ll get you in. If you like it, join the team.’”

Stoloski said he would love to see more teams start up in Philadelphia and hopes the sport will continue to grow in the city.

“Vintage baseball has been in this area now for about 15 years,” Stoloski said. “Philadelphia has only had a team for about four or five of those, so we’re really hoping to use a lot of this momentum to create a better baseball community that exists in the city of Philadelphia.”