It’s an all too familiar scene, a homeless or impoverished veteran standing on a street corner or by a busy intersection, holding a cardboard sign and pleading for help. Often the cardboard signs are inscribed with a request for work, food or money.

The Veterans Multi-Service Center is aiming to change that perspective with their on-going “Rewrite the Cardboard” campaign.

“It’s a cost effective way to motivate the public,” said Debby Derricks, the VMC director of development. “Everyone has a Sharpie and a piece of cardboard. I think if you ask most people, they would say they support veterans and this gives them the tools to show it.”

On Veterans Day (November 11), volunteers and VMC staffers will take to city streets, decked out in camouflage T-shirts with cardboard signs in hand. Their goal is to use the familiar imagery of the signs to promote services like housing placement and job assistance that the VMC offers to veterans.

Delvin Brinson (pictured above) knows how important connecting homeless veterans to these services can be.

“When I came here, I needed some help myself,” said Brinson. “The people who bring [in] people off the streets have to know what it’s like. [You] help them understand what you can offer them to help them.”

Brinson, an Army veteran, was homeless before he took advantage of the programs at the VMC. He eventually became employed as a driver for the VMC, completed their Microsoft training course and now also works as an outreach specialist.

“A couple times I had to keep myself from tears,” said Brinson as he described what it’s like getting a homeless veteran off of the streets. “Someone who has a place to live can go and close off the world for a while, relax and have peace of mind. That allows them to come up with ideas of how they want to be.” 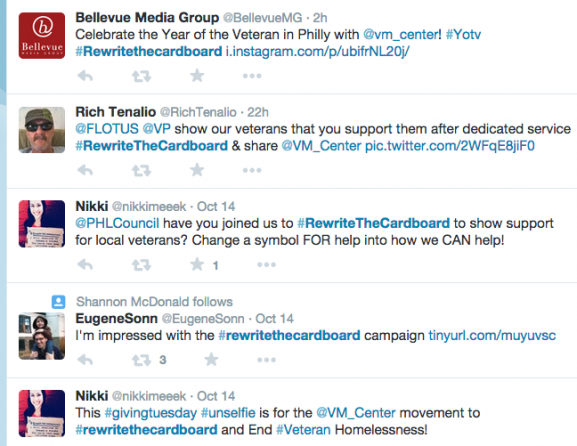 The beginning of 2014 marked “The Year of the Veteran” and the second year for the cardboard campaign. Last year, street teams were organized from a group of 12 people. This year, the number of volunteers is expected to rise to more than 30 people. This all feeds into one of the VMCs’ primary goals of ending veterans homelessness by the end of 2015.

“Everyone is flabbergasted by where we are today compared to where we were last year,” Derricks said of the increase in team members.

The initiative is also growing through social media. Supporters are encouraged to make their own cardboard signs and tweet them @VM_Center with #RewriteTheCardboard. 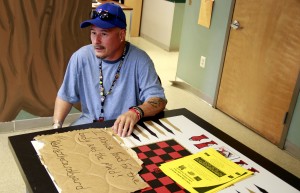 dly sport their own signs around the office, each with their own take on what the campaign means to them.  Among them is Tony Chavez (pictured left), a cook at the facility, who has expressed his perspective through a sign that reads I provide food for the body and the mind.

“I cook healthy food with lots of vegetables to promote wellness,” Chavez said. “I also talk with a lot of the guys when they’re here. Knowledge sharing helps them to grow their minds as well.”

Cassondra Flanagan (pictured below) is an army veteran who now works at the VMC. Her sign reads, “I will advocate for all my fellow veterans.” 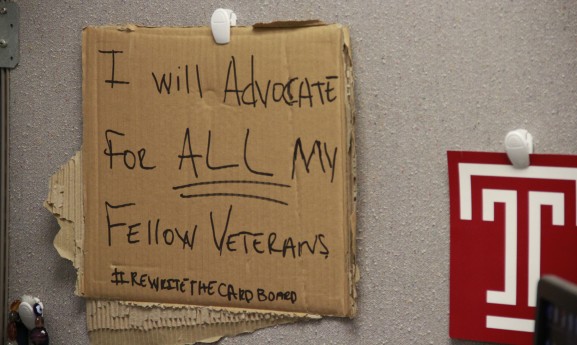 “Advocating, for me, is if everyone tells a bit of their own story,” Flanagan said. “Anybody who has served has probably lost friends and we all face different social issues. You tell your story and other people have a chance to tell their story.” 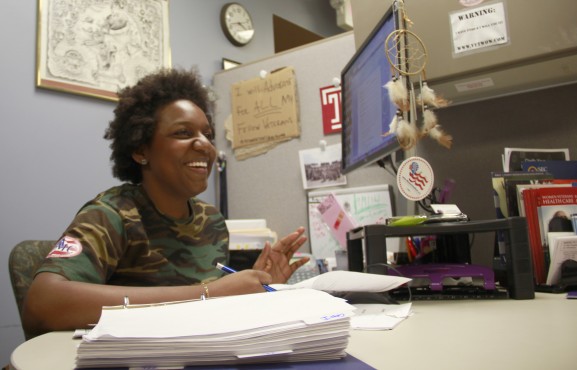 Keep your eye’s peeled in Philadelphia on Veterans Day for the VMC’s street teams. To find out more about Rewrite the Cardboard, visit the center’s Facebook page.

– Text and images by Bob Dieckmann and Zachary Rendin.

The Star Spangled Banner rang out as Joe O’Rourke, a veteran from the Vietnam War, raised the American flag at the Lawncrest Recreation Center on Rising Sun Avenue during a Veterans Day ceremony this morning. [continue reading…]