Most people associate yoga with a squishy mat, hands and feet pressed firmly onto the ground and aligning their spine with the solid floor.

However, Leyna Schaeffer of Kaya Aerial Yoga has been instructing aerial yoga, a practice that involves suspending oneself by brightly colored silks secured to the ceiling of a studio. The inverted moves, meditating breaths and powerful incense are a pleasing combination many across the Philadelphia area are hooked on. 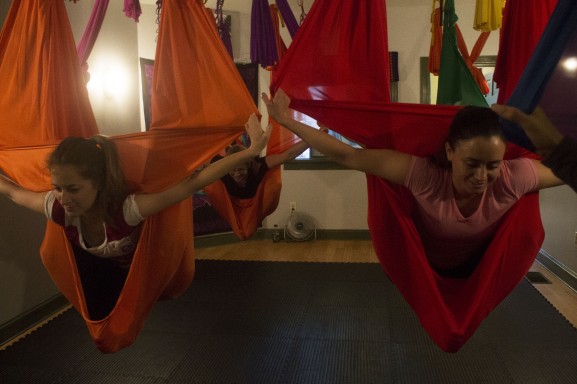 Schaeffer said she has always been a person who took interest in her body’s movements and its relationship to its surroundings. At age 12, she taught herself how to breakdance and even dabbled in a few competitions, which she said were “nothing real.”

A handful of years later, she became addicted to traditional yoga and practiced regularly for years. She was not even aware of aerial yoga until watching a PBS special with her children. A segment aired on acrobatic yoga, demonstrating people creating human pyramids, and she immediately researched it further. When Google images showed her picture after picture of people dangling from silks, it became her mission to try it herself. 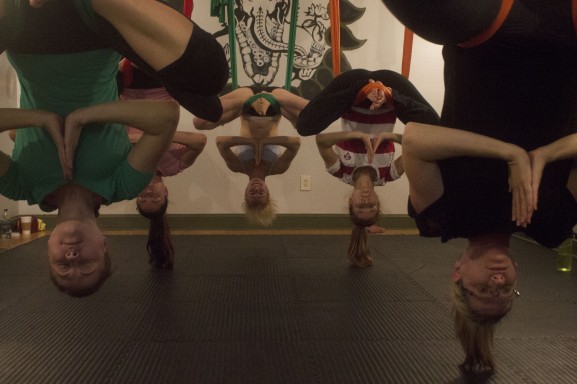 However, finding a class that allowed novices to attend proved to be more difficult than she had anticipated. After two years of searching, she finally traveled to New York to take a beginners class and the commute proved to be more than worth it. Schaeffer found her calling.

“We went upside down, did an ‘Om,’ and then when we came back up I was like, ‘Yeah. This is what I’m going to do with the rest of my life,'” Schaeffer said. 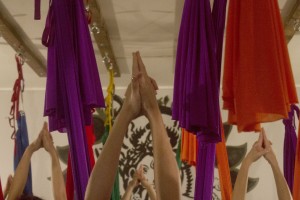 Her difficulty finding a beginners class inspired her to make aerial yoga more accessible. She became co-owner of Kaya Aerial Yoga two years ago, and said the main focus is to make aerial yoga and acrobatics obtainable to people in Philadelphia. Schaeffer and her partner Harrison Wright hold great value in making their studio accessible to people with an interest but zero experience with silks, trapeze work and partner low-level acrobatics. They offer many beginners classes to teach people the basics before allowing them to move onto more difficult poses and flips.

Schaeffer said she considers herself lucky she has had the opportunity to assist in making a positive difference within people. 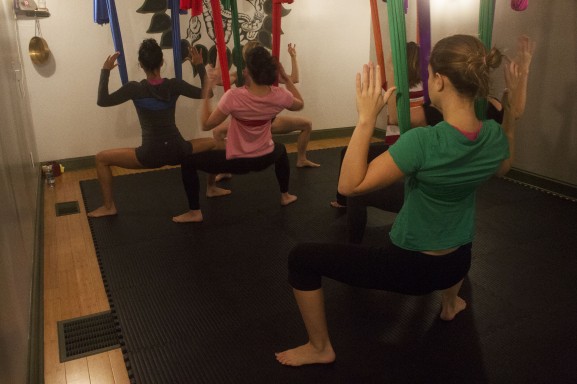 Why is aerial yoga so appealing to newcomers? Schaeffer suspects it is a combination of the bright colors, adrenaline and fear factors that draw people in. She often finds those who try aerial yoga eventually fall in love with floor yoga as well, prompting her to nickname aerial yoga, ‘The gateway drug to yoga.’ Fun aside, Schaeffer also wants to create awareness of the incredible level of health benefits it can bring to those who practice it.

Schaeffer created a new type of yoga, Vata Asana aerial yoga. She said she used her knowledge of acupuncture to create moves that hit specific pressure points, effectively detoxifying the body. It is also excellent for decompressing the spine and building bone density, Schaeffer said, adding that people tell her she looks younger and younger each year and the crows feet around her eyes have disappeared from the amount of time she spends upside down. 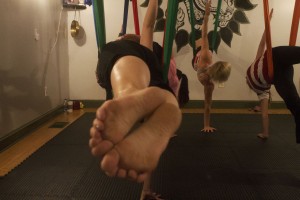 Now her focus is to bring Vata Asana to light. Kaya Aerial Yoga’s next move is to open a location in New Jersey. Not only does Schaeffer want that area to have an opportunity to utilize the health benefits, but she wants the sense of community and trust aerial yoga promotes to be an available experience as well.

Schaeffer continually works to strengthen herself as an instructor and recently attended an acro yoga training in the desert near San Diego. She said she came back better than ever. In fact, she said, her students groaned and begged for her to go easy on them throughout one of her first classes back.

Though gentle and encouraging, she works to challenge her students. Her favorite poses are the relaxing and unwinding ones that take place towards the end of the class along with meditation. However, her favorite class is quite the opposite. She teaches a backlight class, which is an upbeat and energetic one that involves wearing bright colors and performing drops, flips and aerial moves highlighted under the blacklight.

Video, text and images by Chynna Mela and Courtney Rowland.

Exercise is a prominent part of the lives of many residents in the Cedar Park area. With many establishments promoting fitness and health, and recreational parks and centers encouraging healthy practices, many residents have learned [continue reading…]

On a sweltering mid June afternoon, Port Richmond resident Michelle Williams sat on a bench at the Cione Playground. Referred to as St. Anne’s Park by the locals (because of its proximity to the now [continue reading…]