A theater in Chestnut Hill, tucked behind a long driveway off of Germantown Avenue, has united residents through its performances for 85 years. Stagecrafters Theater is a nonprofit organization with early beginnings. The organization dates back to 1929 and was established by a group of women from the Germantown Women’s Club.

While the friends started the theater as an exclusive club, Stagecrafters has transformed into a theater for the entire community. The purpose of Stagecrafters is to promote the advancement of knowledge and appreciation of drama in all of its forms, and to encourage the writing and production of drama in high literary and artistic standards by its members. 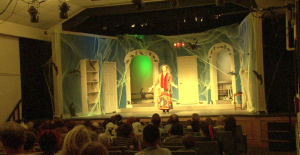 The Stagecrafters Theater, located on 8130 Germantown Ave., began with only one room that presented to audiences of 30. Today, the theater seats 183 guests and is walking distance from popular shops and restaurants on the avenue. Along with the theater, the current building houses a lobby, small kitchen area, restrooms and state-of-the-art production equipment.

Stagecrafters stands out from other companies in the area due to its focus on community and the residents of Chestnut Hill. The organization decided to form a Play Selection Committee, whose members choose plays they believe their audiences will enjoy. The committee, headed by Mark Grayson, encourages subscribers to submit suggestions for plays and even accepts work by local playwrights. After ratings have been tabulated, the committee forms a final idea list and builds a season with directors and a budget in mind.

“We see ourselves as doing something for the community,” said actor Pat Masarachia. “I think we serve a very important role in reminding people what live theater is. The whole theater is an amazing organization, but we really strive to support our actors and directors.”

The theater hosts five productions a year that range from classic to contemporary. The group’s latest annual venture, Halloween Scary Stories, involves the readings of spooky tales, a mystery magic show and costume contests. The theater works with other organizations within the community to bring it all together.

“It’s my first time here,” said young attendee Lillian Natalia. “I’m very excited to see the show and to see if it is spooky or funny.” 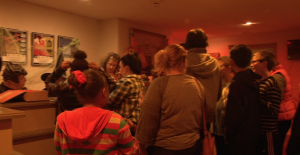 Director of Development Jane Toczek explained that each year the theater draws more crowds than the previous one. She believes the company has been able to be successful because of its focus on uniting the community. When the theater is not being used for play services, the organization offers its space to the community for use by other local events. The organization recently held art classes, on the theater’s lawn, during the Harry Potter Festival.

Over the years, the organization has become a valuable asset to the community and recently began receiving financial support from the Chestnut Hill Community Fund and the Philadelphia Cultural Fund.

“We welcome auditioners, volunteers and audience members from all parts of the community,” said Toczek. “We really try to be a part of the community. I think it is great. We really have tried to increase our visibility and we continue to try. I just hope that more people know what we do and know that we are committed to the highest production values possible. We learned what works well and what doesn’t work over the years.”

Stagecrafters brings together local actors who are trying to make a name for themselves in the highly competitive theater community. The company also welcomes volunteers of all ages. Volunteers can help direct, act, make props and paint sets.

Stagecrafters strives to be a place where people in the community can come together and create something bigger than themselves.

“It is because of the talent on and off stage that makes me want to come back,” said actor Letta Brown. “The shows are a lot of fun and we try to accommodate the community as best we can. It is not just what is inside, but outside, because they try to make it so that it is more diverse. You want to showcase what your environment is, and Chestnut Hill is always changing and so is the city.”

Stagecrafters Theater offers its community a place to escape for a little while. In a world that often revolves around phones and technology, Stagecrafters attempts to entertain the community in a different way.

Video, text and images by Nicole Bernier and Molly Mulvihill

[vimeo 49647120] When Corey Trower walks into work at The Little Treehouse, he isn’t just there to make money. The gymnastics instructor is there to influence the lives of local families. Trower tells a success story with [continue reading…]