Halloween is creeping right around the corner and candy-loving kids are in luck. The city was named the fourth-best in the country for trick-or-treating by Zillow. If that wasn’t good enough, Cedar Park earned the title of fourth-best neighborhood in Philly to take the little the ones door-to-door.

In Cedar Park, Halloween has become a staple for residents of all ages. The hype started after the nearby neighborhood of Spruce Hill began holding the “Little Tots Halloween Parade.” After the huge response, Halloween activities began to make their way to the Cedar Park area. Many of the residents have continued to take their children to the parade, which is still held every year.

Naomi Fiordimondo said even though her son is still very young, they still take part in the event.

“We did the parade instead of trick-or-treating,” Fiordimondo said. “Our little guy is only 15 months old, so he doesn’t eat candy. In that case, it just seems like begging our friends for candy. The parade was lots of fun and we’ll be doing it again this year.” 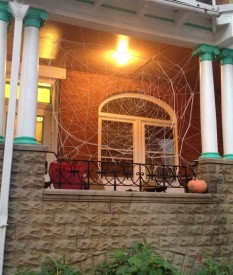 Although the parade is a huge Halloween highlight, there are other notable factors that helped Cedar Park make the Zillow list. The neighborhood itself played a big part in getting on the list, said Michael Froehlich, president of Cedar Park Neighbors.

Although Froehlich said the highlight for his young daughter Zora has always been going out trick-or-treating and dressing up with her friends, he noted there are other traditions to partake in as well.

“On Oct. 30, or Halloween Eve, there is an annual punk cover band show. It’s held at an undisclosed location and the bands are dressed up in costume,” Froehlich said. “On the 31st, there are dumpster races on Pine Street – a dumpster derby. It’s basically people racing anything with wheels down the street.”

While those events have been popular, Froehlich said they are not as well known as the parade. Regardless, there’s something for everyone.

“I think everybody loves that,” he said. “Nothing is mischievous and things are all in good fun.”

In terms of Halloween events new this year, the Philadelphia Women’s Slavic Ensemble decided to do a Halloween caroling event around Cedar Park. Choir member Alexandra Jones explained the event idea came from a mutual love for Halloween among the members. 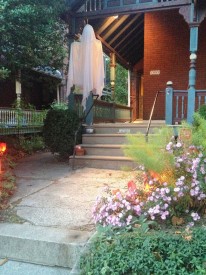 “Many of our songs sound spooky or exotic to the Western ear,” Jones said. “Plus, it’s one of the few holidays where people are out and about in their neighborhoods and it’s acceptable to ring someone’s doorbell and interact with them for fun.”

The choir, which is based out of West Philadelphia, plans to make its Oct. 31 performances fitting for the occasion.

“We’ll be in costume, of course, and singing our Balkan songs in Macedonian, Croatian and mostly Bulgarian. The folk music of many Balkan nations sounds different than the tonalities of Western Europe,” Jones said. “I think that singing music that might sound unique or different has a place at Halloween, where everyone gets to share who they are in a different way than usual.”

Although most of the other events are very children-oriented, Jones said the caroling would probably be more appreciated by adults.

“Kids might not know that what they’re hearing is uncommon, and we don’t really want to scare anyone. But we do have some songs that sound very animated and happy that shouldn’t spook any kids,” she said. “Ironically, some of our most cheerful songs have really depressing lyrics when you translate them, but unless you speak Bulgarian, you wouldn’t know that.”

Zillow came up with the 2014 list of the top 20 cities for trick-or treating in the country based on a variety of factors. The list was determined by factors including home value index, population density, walking distance and local crime data, according to the website.

“The most candy, in the least amount of time, with the fewest safety risks,” are the factors Zillow took into account.

Aside from Cedar Park, the notable Philadelphia neighborhoods for trick-or-treating are Chestnut Hill, Manayunk, Mount Airy and Fairmount.

Text and photos by Shauna Cottle and Courtney Burrell

Goblins and ghouls are back again! The Center City Spirit Halloween store is open for business. Kids aren’t the only ones running around looking for costumes. Adults are, too. Store manager, Nicole Durkson said the most [continue reading…]

Poplar: Congregants Drawn To Church With Deep Roots In Neighborhood

Leslie Callahan can’t pinpoint a specific reason why people end up at her church, located on the southwest corner of Wallace and 10th streets. But she does know that once people walk through the front [continue reading…]

Point Breeze: This Week In The News – Brick Thrown Through A Window, Flowers Stolen From Front Of Woman’s Home

In case you missed it, we found a few places where people were talking about things happening in Point Breeze: Woman Gets Brick Thrown Through Window: Point Breeze resident Lisha Davis reported on Thursday, August [continue reading…]