The sounds of brooms, shovels, brushes and laughter filled the streets early Saturday morning. The neighborhood that is usually quietly waking up was wide-awake and cleaning their block.

With a bit of planning from the PhillyRising, the 3000 block of Tulip Street started picking up trash, sweeping sidewalks and brushing porches. Created by the City of Philadelphia, PhillyRising is responsible for informing streets about community cleanups. Most residents hear about it through flyers or social media.

Neglected streets are common in Philadelphia, making the group more and more relevant. Some come from expected neglect, while others are a byproduct of intentional mistreatment. 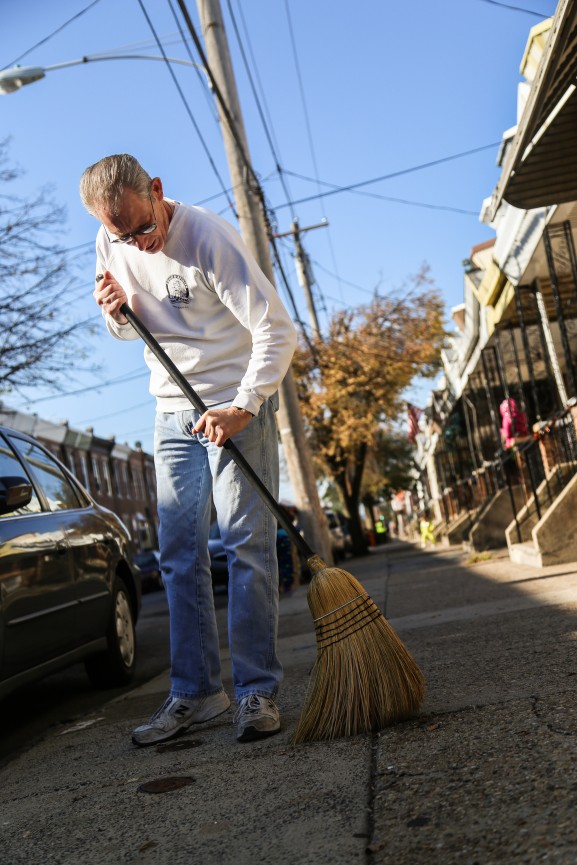 Theresa Costello, President of Port Richmond Community Group, was one of the volunteer groups for PhillyRising cleaning up the block. She had encountered notorious slumlords in the past, and was tired of the blocks feeling so abandoned.

“We started getting sick of watching [the neighborhood deteriorate] and we didn’t really know what this Robert Coyle was doing,” Costello said. “We knew it was something fishy but we founded the Port Richmond Community Group to try and help the neighbors.”

According to a his court case, Coyle had been accused of forging house licenses and garnering $15 million in bank loans for roughly 300 homes. The impact of this left a lot of already struggling families homeless but many streets looking run down and uncared for.

“The enormous amounts of trash that people just leave there,” Costello said. “It looks like no one cares and we’re just tired of looking at it, tired of the people who don’t care enough to clean it up.”

With the overwhelming success of PhillyRising, it appears that a lot of neighborhoods also agree.

Jack Dolan, a union carpenter and Tulip Street resident, was thankful to have the group come out. He had lived in the same house for decades and grows accustomed to the annual cleanups. 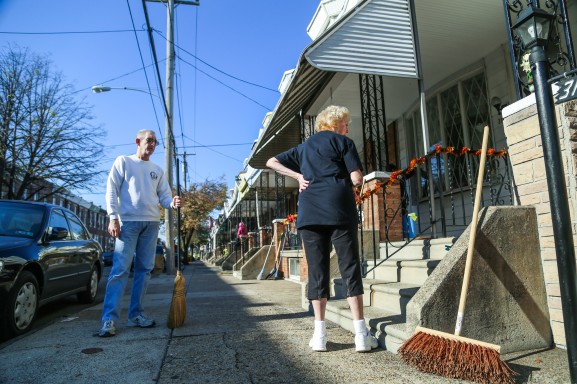 “It used to be the old house wives doing this, but then again it was never this dirty,” Dolan said. “Now they have passed on and gave us the streets and they are filthy. It’s good to get out here and clean up whenever we can.”

Strong roots in the neighborhoods are some of the reasons people actually come out and want to cleanup. While it may seem hopeless to do it by themselves, a community meetup is important to show pride for your street as well as instill values in children.

Costello brings a small army of children and always urges children to help out with the cleanups. 11-year-old Leo Medina came out with Costello for the third year in a row to help clean up Tulip Street. Although he does not own a house, a clean street is something he has become very passionate about. 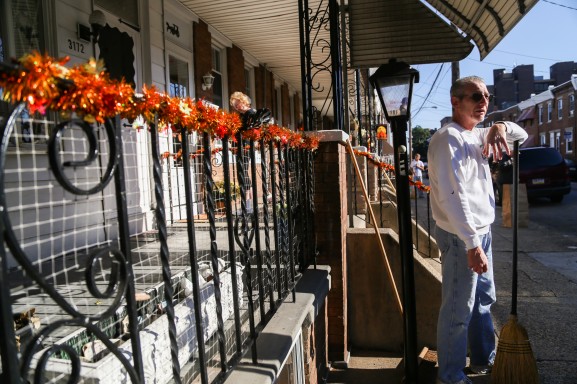 “It’s kind of dangerous because if you are riding your bike or something, [trash] can get in your wheel … and you could fall and get hurt,” Medina said.

Stay at home mom and community resident Lizzette Peluyera is also passionate about showing her children the right way to respect property. She has participated in the block cleanup the past three years and hopes the children learn the valuable lesson of cleaning and maintaining property.

“I think it means a lot to them, because this is the way the parents are raising them up,” Peluyera said. “When they grow up they will want to do the same thing. And they enjoy [cleaning the streets].”

Dolan agrees with the values instilled from this community group helping the streets.

“All I can say is … It would be a good idea if every street did this,” Dolan added. “Theres too much dirt in the city, too much trash laying around.”

– Words, images and video by Andrew Thayer and Patrick McCarthy.

A park cleanup and Veteran’s Day ceremony, a five-block cleanup and a neighborhood watch walk-through were just some of the successes highlighted during a PhillyRising meeting at the Lawncrest Library on Tuesday night. PhillyRising is [continue reading…]

Roxborough: Cleaning Up the Drug Problem in Honor of Tim Strain

Tim Strain was 18-years-old when he burned his hand on the muffler of his lawn mower. He then went to the hospital, where he was prescribed Percocet. After a few days staying home, Strain went [continue reading…]