When William Penn was designing Philadelphia, he mapped out his ideal city by using a grid system. Modern day Philadelphia greatly differs from Franklin’s plans but his first assigned plot of land remains in existence today as the oldest, still worshipping, church building in Pennsylvania.

Gloria Dei is also the second oldest church building that still serves as a house of worship in the United States. The oldest is the Old Swedes church in Wilmington, Delaware.

Revered D. Joy Segal is proud to share and represent the Philadelphia church’s Swedish past.

“The Swedes were here before anybody else,” said Segal. “And they built buildings that lasted!”

When Swedish colonists arrived in the area, they formed congregations with a desire to worship Christianity. In 1677, Swedish colonists converted an existing log house into a place of worship. Gloria Dei served as a Swedish Lutheran Church for approximately 150 years and eventually became a part of the Episcopal Church in the mid 1800s.

Declared as a National Historic Site, the church served many prominent historical figures. Betsy Ross was married to her second of three husbands at Gloria Dei. Benjamin Franklin’s lightning rods were placed on top of the church by a former reverend, Nils Collin. They were later removed and now rest in the archives. 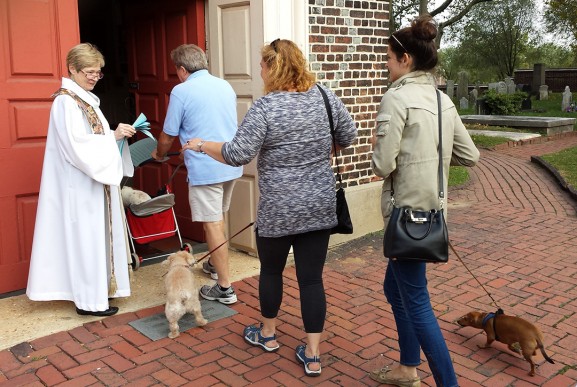 Located directly in front of the church’s entrance is a historic cemetery, one of the oldest burial grounds in Philadelphia. The reverend looks at the cemetery as a blessing and also as a mission to remind members of the history of the church. She conducts worship outside in the cemetery several times a year.

“We have this graveyard with all these witnesses to remind us of the history that’s here and the history we need to be sure to pass on to the next generation,” said Segal.

The historical significance of the church’s location in South Philadelphia plays a role in the church’s importance as well. Strong immigrant populations formed the surrounding neighborhoods, along with the feelings of unity in these close-knit communities. Segal describes her congregation at Gloria Dei a family and always open to new members.

“We have people who were raised in South Philadelphia, who have moved to the suburbs, who still come to Gloria Dei as their home congregation,” said Segal. “They would never think about going anywhere else. They travel back and forth every Sunday for events.”

Events and stewardship opportunities, like the Blessing of the Animals, are ways that Gloria Dei reaches out past the congregation and into the community. Once a year, on Saint Francis Day, the church holds a special service where pets are invited and individually blessed in church to emphasis the importance of proper care of animals. 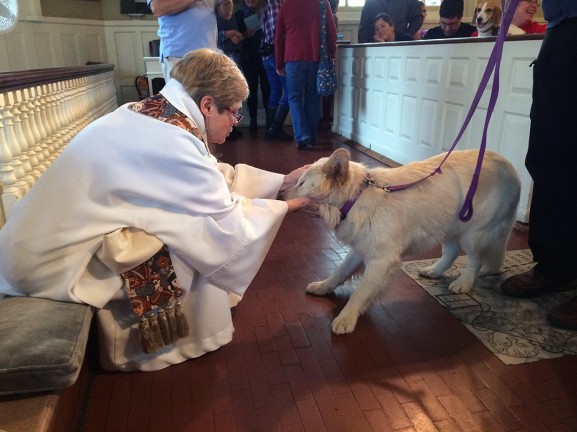 Sally Daly, who brought her pet turtle in to be blessed at the event, mentioned she visited many churches and finally found that Gloria Dei was the best fit. Turned off by a Catholic priest’s strict regulations regarding communion, she wanted to find a church that would not discriminate.

“The church isn’t always focused on bringing newcomers into the church,” said Daly. “They concentrate on what they already have here.”

One of the main objectives of the congregation is to make the church an accessible place where anyone can reach out and help others. Members volunteer for the Ronald McDonald House Charities and the Episcopal Community Services (ECS) St. Barnabas Mission.

Through the ECS, volunteers reach out to single mothers. To help them, they read stories to the younger children and also assist teenagers with resume building.

Many of the events at Gloria Dei organized by sextons James and Paula Minacci, who emphasize the local, community element of the church by bringing in neighborhood food, drink and music vendors.

“Fellowship is what the church, to us, is all about,” said James Minacci. “The meeting and greeting afterwards, getting to know each other. Everything is local, all working towards keeping that community tight.”

The 300 year history of Gloria Dei is a large part of what has shaped the present day mission and congregation, however, Segal emphasizes that anyone is welcome into the family. Through worship, church activities and community outreach, the community at Gloria Dei is ensuring that the church will be around for many more years.

“Sometimes people want to get out there and help others but don’t know where to go,” said Segal. “This is the place.”

– Text, images and video by Alex Snell and Amanda Kim.

“I’m one of those types that if you implant an idea in my brain, I can’t get rid of it,” said Christina Saboe, owner of Fireside Camp Supply located on South Street. Her two-year-old camping [continue reading…]

R. Eric Thomas had been living in Philadelphia for about three years, not having found what he had moved here for. Then, one day, something caught his eye. “I just saw an ad in the [continue reading…]