Formerly known as one of the most persistently dangerous schools in the state, Strawberry Mansion High School has seen changes, some of which include the implementation of a U.S. Attorney-backed youth court. 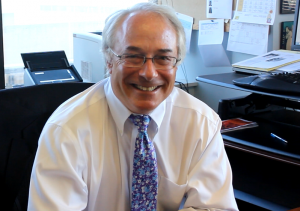 Reed (right) oversees a violence prevention, community outreach and prison re-entry program. A part of that effort is involved in working with schools and communities in Philadelphia to reduce violence.

“The idea is to deter or stop people from entering the criminal justice system and give students other alternatives,” Reed said. “So we started working in a whole series of schools in 2010, and that’s how I really started looking into what the programs were out there that would help school-age students make better choices and decisions.”

Reed said the goal is to teach students in violent, low-income communities to resolve conflicts through a restorative justice system and lessen the likelihood of youth falling into the school-to-prison pipeline.

“The school-to-prison pipeline is the idea that the earlier a kid gets involved in the juvenile justice system, the greater chance that he or she may get involved in the adult system and maybe even get into the federal justice system,” said Reed. “We are trying to make a difference and give people the opportunity to see the world in a slightly different way and to make better decisions.”

After seeing the effectiveness of the youth courts led by Gregg Volz (below, right), the director of the youth court system in Chester, Reed and the U.S. Attorney’s office began supporting the idea of developing youth courts in Philadelphia. Temple Law students Alex Dutton, Michelle Ashcroft and Jonathan Lauri joined Volz and Reed in their efforts. 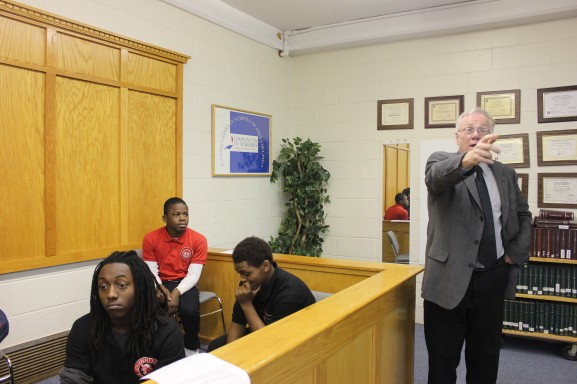 “When we started out at Strawberry Mansion High School, we had a challenging group,” Reed said. “We started in November of 2012 and by the early spring of 2013 they had their first youth court session. It was an intensive effort by Gregg and the Temple law students.”

Councilman Curtis Jones visited the Strawberry Mansion High School youth court several times and invited the students to do a mock trial at a courtroom in City Hall.

“This was really exciting for the kids, they got a standing ovation at City Hall and they really enjoyed themselves,” said Reed.

The next steps are to expand the number of youth courts in Philadelphia and more specifically around the 22nd police district, which is the most dangerous district in the city for youth.

Instead of losing valuable school time because of suspension, students can learn more about how the legal system works and be tried fairly by their peers.

“Many of these kids don’t have role models who believe that education is the key or the way out,” Reed said. “Some people come to school just because of youth court. We are trying to give them the incentive to appreciate that there is a bigger world out there.”

Down the line, Reed sees a bigger role for youth courts in Philadelphia. As students become better trained, he would like for them to take on more serious cases – cases that could lead to an arrest.

“Could a youth court handle that? Well, I think that it depends on the students, the principal and the juvenile justice system,” Reed said. “But if the school and the youth court proves itself over time, that they are meticulously fair, and they know what they are doing and they do it well, then I don’t see why they couldn’t do a more serious case.”

The youth courts have numerous benefits for the students who participate in them, according to Reed, including the development of critical thinking skills and the ability to make decisions based on evidence and group efforts.

“I think it taught them self-confidence in addition to learning the process. It gave them the ability to have some authority and power to make empowering decisions. It also teaches them the idea of working with a group of people to make a right decision, or what they perceived as the right decision,” said Reed. “In a sense they are getting a second chance, but really they are getting an education.”

-Video, text and images by Lindsey Murray and Lara Witt

[vimeo 60275537] Just over 12 hours after the principals for Leslie P. Hill Elementary and Strawberry Mansion High School spoke at the School Reform Commission hearing this week  teachers at those schools and community members voiced [continue reading…]

Shouts of “Stop the violence, increase the peace” echoed through the streets of Strawberry Mansion as community activists led an anti-violence march Wednesday, demanding their voices be heard. The “Take the City Back” march was [continue reading…]

Councilmember Helen Gym held a meeting to allow students to explain their concerns from the pandemic.
[continue reading…]