Jeannette Kurzenberger is 96 years old. She is a Mayfair resident and has lived in the same home for 74 years. Since the passing of her husband, Kurzenberger lives alone. To many, the idea of a woman her age living anywhere other than a nursing home is unimaginable, and living alone would be impossible. But nearly 30 years ago, the daughter of a family friend founded an organization that would later change Kurzenberger’s life. 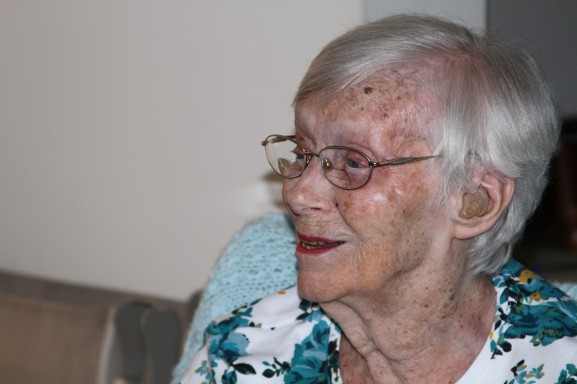 Jean Langenbach founded Community Care Center of the Northeast in April of 1985. The organization is a licensed, in-home, non-profit service provider that caters to predominately low-income elderly people and individuals with disabilities. Clients and their families pay out of pocket to receive care from CCNE at a lower cost than it would be to stay in a nursing home.

Nancy Steinke is the administrator of CCNE. She said home care is ideal for the well-being of the elderly.

“I have found that seniors who are in nursing homes become detached and lose track of the days of the week because they are in unfamiliar surroundings,” said Steinke. 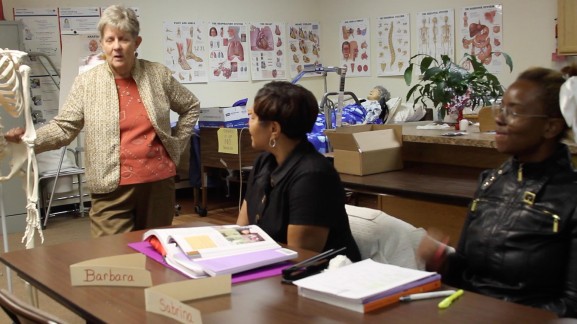 Langenbach trains caregivers and educates them on how to care for the elderly. Those who complete the training become certified caregivers who are able to work not only at CCNE, but also in other senior care facilities.

Years ago, Langenbach suffered an ailment that left her to pay out-of-pocket for care due to insurance coverage. This experience sparked the idea for CCNE.

“I had an illness a long time ago that required to me to always have care,” said Langenbach. “I fell through the cracks which a lot people do today because of insurance. I didn’t want people to suffer what I went through.”

Langenbach said she was also inspired by Joseph Bayly’s “Winterflight,” a novel about a family that must work together to protect their elderly family members in a time when the rules about health care and aging have changed and they cannot rely on the government.

“I never wanted to go into a home,” said Kurzenberger.

Kurzenberger’s husband died about 20 years. And her four children, who are now adults with families of their own, have such hectic schedules that they can’t be at their mother’s side as much as they would like.

“Oh, it feels wonderful,” exclaimed Kurzenberger about being able to remain in her home. “There’s nothing like it!”

CCNE caregivers assist seniors with their everyday needs like bathing, feeding and housekeeping. Langenbach and her staff try to pair clients with caregivers that can best suit their needs. Langenbach also does what she calls “supervisory visits” to be sure that services are being provided properly.

On this particular day, Langenbach went in to check on Kurzenberger. She observed her heart-rate and blood pressure and chatted with her old pal. Langanbach says the periodic visits make CCNE stand apart from other service providers.

“If the client isn’t happy then we’re not happy,” said Langenbach. “I have to make sure of that.”

The caregivers also provide clients with social interaction. Langenbach said it common that caregivers bond and become part of their clients’ family.

Isatu Kamara is one of Kurzenberger’s caregivers. She moved to the United States from Senegal in Febraury of 2010. Kamara found out about CCNE and decided to check it out. Langenbach trained Kamara and hired her to work for CCNE.

After spending hours together on a daily basis, Kurzenberger and Kamara have built a bond and genuinely enjoy being in each other’s company.

“We talk about different things,” said Kamara. “She talks to me about life and everything that goes on. She preaches to me about religion, and now I’m going to her Christian church with my children.”

In addition to providing in-home care, CCNE runs Wheels for Independence, which assists in transporting the elderly and disabled in the community. Volunteer drivers take clients to various places like doctor’s appointments and the grocery store. The program started about eight years ago and currently has more than 300 clients and 25 drivers.

“Our drivers are really wonderful and help clients feel as independent as they can,” said Cathy Marrone, coordinator of Wheels for Independence. “The service is especially helpful to people who live far away from family or have children who cannot take time off work to take mom or dad to the doctor.”

Although the CCNE has clientele and members on staff dedicated to the program, funding has depleted and the organization might not be able to keep its doors open for much longer.

The CCNE used to receive multiple grants. Thriving churches in the area also provided financial support to the organization. Langenbach said church attendance is low, causing a decrease in their support, and the grants have virtually disappeared.

“We’re struggling because a lot because private sectors have dropped,” said Langenbach. “They don’t want to fund old programs with the elderly and disabled. They want new programs.”

– Images, video and text by Lynette Townes and Clifford Augustin.

Friday afternoons at St. Anne’s Senior Community Center are never a bore. The weekly Clay Creations class, taught by Anne Koszalka, highlights many seniors’ weeks and gives them something to look forward to on Fridays. […]

While the residents of Park Pleasant Nursing Home may not consider themselves artists, the unique and spirited atmosphere of Park Pleasant suggests otherwise. Located at 4712 Chester Ave., the nursing home rehabilitation center is decorated […]

St. Hubert High School for Girls played its own part during the World Meeting of Families and the Pope’s historic visit. Among other contributions, St. Hubert’s helped paint tiles for “The Sacred Now: Faith and Family in […]