In the corner of Snyder Avenue and 8th street in South Philadelphia, Juntos, a local grassroots organization, held a meeting regarding information that angered the local immigration community.

A recent report by The National Day Laborer Organizing Network suggests that the U.S. Immigration Custom Enforcement are becoming more aggressive as the Obama administration continues to postpone their promise to change the immigration policy since the beginning of the year.

Juntos contributed information to NDLON, including the movement and interactions of ICE in Philly and the surrounding counties.

Back in March 2014, the organization accompanied other local non-profits in City Hall to witness Mayor Nutter sign a policy to cut all ties between ICE and the Philadelphia Police Department. Six months later, ICE changed their tactics by communicating with other city officials for leads and arresting people in different locations, such as their homes or within their community.

“We are asked to wait to reform immigration policies that he himself has called ‘inhumane,'” said Erika Almiron, the Executive Director of Juntos. “And meanwhile, ICE agents are again eroding trust between communities and local government with new tactics that violate our civil and human rights.” 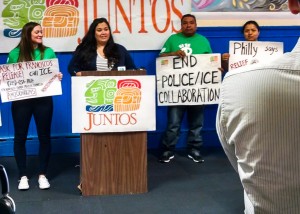 Jasmine Rivera, a lead organizer for Juntos, stated in the report that ICE had constant contact with district attorneys from various counties. She also explained that in Chester county, the juvenile court system “reports all undocumented juveniles to ICE.”

According to The Transactional Records Access Clearinghouse, an online immigration database, about 38,000 immigrants were prosecuted for entering the country illegally in  2014, which is a 39 percent decrease from the previous year. However, prosecutions rose significantly during the Obama Administration. In 2007, there were 39,458 prosecutions for entering the United States illegally. In the following year, the number rose to 79,431 – a 50 percent increase – after Obama was settled into the White House.

The NDLON report also states how ICE is retaliating against organizations for their advocacy against deportation. Testimonies from non-profit organizations in other states, such as Arizona, claimed ICE has made it difficult for families to visit their loved ones in detention centers. Some even claimed that some are held in solitary confinement.

In New York, a small charge can also lead up to deportation. According to the report, a member of Families for Freedom claimed that he received a call about a person who was arrested for a small amount of marijuana, but was picked up by ICE during his probation visit. Under New York law, the penalty for possession of less than two ounces of marijuana is a fine of $100.

In Philadelphia, Juntos and other organizations have protested in front of the local ICE office near Center City in the past. They all have tried, and will continue to show support for undocumented immigrants and their families.

“We are sending a message to the local Philadelphia ICE office,” said Pilar Molina, a leader in the Juntos organization. “Your rogue tactics will not be tolerated in our communities. Practices that rely heavily on racial profiling harm our families and must be ended. We will not stop until you are out of our communities and our families are safe.”

– Text and images by Edward Barrenechea and Kevaun Green

Immigration: VietLead Pushes Back Against Federal Government Policies And Practices

Nancy Dung Nguyen has made her career in social justice work, focusing originally on domestic violence issues and youth organizing. Now, she uses her advocacy skills to help her own community as the executive director [continue reading…]

Sundrop Carter of the Pennsylvania Immigration and Citizenship Coalition recently celebrated her five year anniversary with the organization. Now in her third year as the executive director, she enjoys working to infuse the collective thinking [continue reading…]

This past August, Oneita and Clive Thompson (pictured above) received a phone call telling them something they never could have imagined: they were being deported. An Immigration and Customs Enforcement (ICE) officer left Clive Thompson [continue reading…]