Visit any of the few skate parks in Philadelphia and one thing is immediately apparent: many skateboarders aren’t wearing helmets or protective pads.

According to the American Academy of Pediatrics (AAP), Pennsylvania is one of 22 states with some variation of a bicycle helmet law in place. However, there is no current legislation that requires skateboarders to wear helmets or any protective padding.

The AAP also notes that more than 68,000 emergency room visits and 1,500 hospitalizations among children under 14 years of age in 2009 were due to skateboarding injuries. 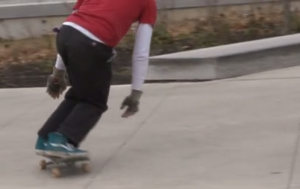 Concussions may not be the most common injury in skateboarding but Dr. Robert Franks of the Rothman Institute thinks skateboarding concussions are actually a bigger deal than many people realize.

According to Franks, the skateboarding mentality plays a big part in why skateboarders aren’t suiting up in pads before hitting the streets.

In his blog, Franks attributed to an earlier study which found that helmets can reduce the risk of head injuries by 85 percent and brain injuries by 88 percent. Despite the odds of serious injury being reduced, skaters still prefer to wear no padding or protective gear because it restricts their range of motion.

Meghan Mattson (below), a certified athletic trainer who also works for the Rothman Institute, held a concussion symposium in accordance with the Jefferson Comprehensive Concussion Center at Lower Merion High School in Ardmore recently. 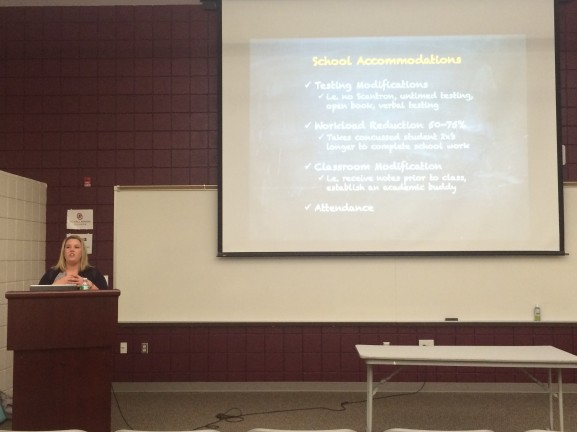 At the symposium, Mattson provided information on diagnosing and treating concussions. She emphasized the importance of athletic trainers, who are vital to the recovery process. Since skateboarding is an individual sport where coaches and athletic trainers aren’t necessarily present, Mattson said education is vital in helping to prevent injuries.

Concussion symptoms may include headaches, dizziness, nausea and sensitivity to noise. These symptoms may be present in other crashes and falls that naturally come along with skateboarding, making education all the more important.

According to a 2011 study done by the Center for Disease Control and Prevention, more than 6,000 traumatic brain injuries resulted from skateboarding during the previous decade. While there is no preventative measure that is 100 percent effective against concussions, helmet requirements would certainly be a step in the right direction. 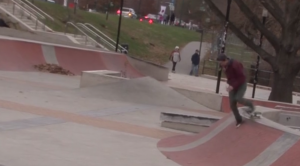 Thomas Jefferson University Hospital physicians argue that skateboarding helmets should be certified by Snell or the American Society for Testing and Materials (ASTM). Sam Korolev, who interned as an athletic trainer at the famous Camp Woodward extreme sports camp this past summer is an advocate for helmets when performing any type of extreme sports, skateboarding in particularly.

“The first thing anyone wants to say is that no helmet can prevent a concussion,” Korolev said. “Though no helmet can prevent one, they’re having tests proven showing that the whole purpose of these helmets is not to necessarily prevent but reduce the forces that are acting on the head. I, personally, am a big believer in helmets for any of these major contact sports where there is a possibility of a head injury.”

Korolev also believes in alternative forms of injury prevention such as stretching and foam pit work. While foam pits aren’t easily accessible for the average urban skateboarder, he saw that they allowed skaters to work on tricks without risking injury before they were ready to take them to the real ramps.

“What I liked while working at Camp Woodward with skateboarders is if you get this environment to practice new tricks in a foam-padded area, like a foam pit,” Korolev said. “It’s a great way to start off and have them build their way. That’s not to say that people shouldn’t take risks, but being knowledgeable about your skill level and going from there is the best thing.”

Skateboarders, especially those practicing in urban areas and people in medical professions may never see eye-to-eye when it comes to wearing protective gear such as helmets and pads.The research is undeniable that these protective measures are their to help athletes continue to do what they love. With skateboarding’s prominence in Philadelphia, injuries are inevitable but certain injuries are not necessary in the opinion of the various people in the medical field.

For information on the history and culture of skateboarding in Philadelphia, click here.

-Text, images and videos by Ashley Dougherty and Anthony Bellino.

FDR Park: Local Skaters’ Pride And Joy Shines from under an I-95 Overpass

Philadelphia skateboarders have slowly pieced together a skater’s paradise underneath the Interstate 95 overpass in Franklin Delano Roosevelt Park. Located near Broad Street and Pattison Avenue, skaters gather at FDR Skate Park daily to shred in […]

The brain is a complicated organ. Containing billions of neurons, it is responsible for controlling the body, from reflexes to memories to body organs. In a way, it acts as a central computer, storing a […]

Concussion Series: ““You Almost Don’t Know What a Concussion is Like Until You Go Through One.”

From the turf field at 11th Street and Cecil B. Moore Avenue, one can hear the high-pitched frequency of whistles blowing mixed with the unmistakable sounds of coaches yelling as the St. Joseph’s Prep lacrosse team […]